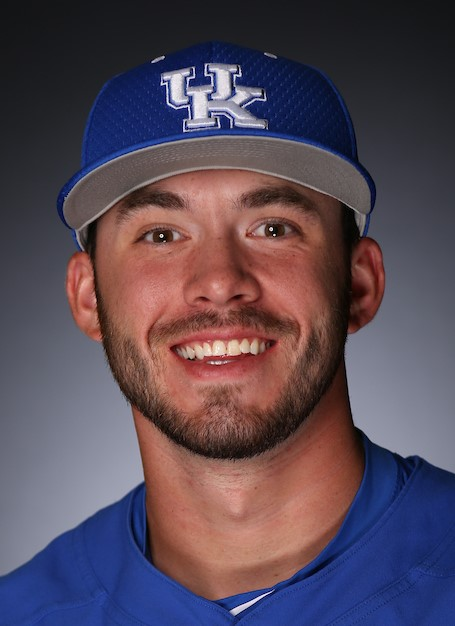 Outlook
Sat in the mid-90s for much of his freshman season…Became the setup man for closer Logan Salow midway through the season…Comes right after hitters…No surprises, just well above average stuff…Breaking ball is improving…Super competitive and confident on the mound…Perfect mentality for a closer…Not scared at all.

2017 SUMMER
Appeared in three games with the Brewster Whitecaps of the competitive Cape Cod League…Was lights out in his short stay on the Cape, going 2-0 with a save in 6.2 innings of work…Allowed just three hits and struck out six as opponents hit just .130 against him…Drew the attention of scouts with his plus fastball and competitiveness on the mound.

2017
Appeared in 24 games…Went 2-0 with a 3.18 ERA in 34.0 innings pitched…Yielded just 20 hits, walked 14 and struck out 39…Earned his first career save on 5/24 vs. South Carolina in the SEC Tournament…Made his first collegiate appearance on 2/24 vs. St. Joseph’s, striking out two in a perfect inning of work…Struck out a career-high five batters on 4/8 at Mississippi State…Emerged as the Cats’ primary setup man for closer Logan Salow…Struck out at least one batter in nine of his final 10 appearances…Threw a career-high 53 pitches on 6/4 vs. NC State in the NCAA Tournament…Logged a career-high 4.1 innings on 5/13 vs. Tennessee, giving up no baserunners and striking out two.

HIGH SCHOOL
Ranked the No. 80 right-handed pitcher and No. 241 overall player in the high school class of 2016 by PerfectGame.org… 2016 Gatorade State Baseball Player of the year … Accumulated numerous honors and named First-team All-State, OHSBCA Outstanding Offensive Player, OHSBCA senior all-star, and Division 1 Player of the Year as a senior … Went 5-1 on the mound during his senior season with a 0.19 ERA and 60 strikeouts in 36.1 innings pitched … No. 2 ranked prospect in Ohio as rated by Prep Baseball Report … Hit .523 with a .644 on-base percentage and 30 runs as a senior … Attended the 2016 All-Star Preps Best of Stark Gala … Coached by Spike Ridgley … Earned four letters in baseball.

PERSONAL
Full name is Christopher John Machamer…Last name is pronounced “Mock-UH-mer”…Major is Communication…Son of John and Stephanie Machamer…Born in North Canton, Ohio…participated in several community service organizations while in high school…Wears No. 33 because it was Jesus’ age when he died.