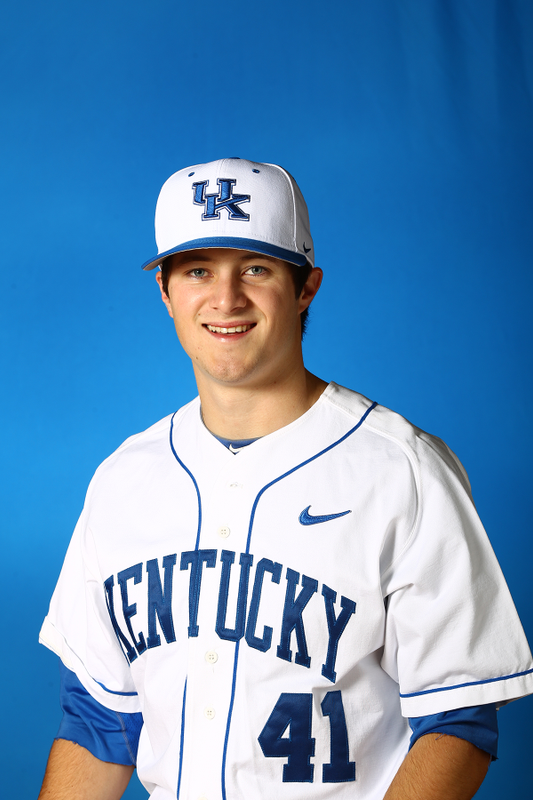 Outlook
Transfer from Transylvania Unversity made the team through walk-on tryouts and a good fall practice season in 2013 … Has a good right-handed slider … A great athlete, played both ways for Transy and coach Chris Campbell … Sat out 2014 as a redshirt while transferring … A former star wide receiver at Male High School, leading the team in catches, yards, yards after catch and touchdowns as a senior.

Summer
Pitched in 15 games with one starts for Elimira in the Perfect Game League … Had a 1-2 record and a 4.15 ERA with three saves … Worked 21.2 innings, allowing 24 hits and four walks, striking out 19.

2014
Redshirted season … Played for the Lexington Hustlers in the Great Lakes Collegiate League … Appeared in seven games with two starting assignments, earning a 1-3 record and a 2.31 ERA, saving one game … Worked 23.1 innings, allowing 21 hits and 15 walks, striking out 18 … Picked up first win of the summer with 6.2 innings in a start, allowing two earned runs.

High School
Played at Louisville Male High School for coach Todd Driskell, earning four letters … Had a 9-3 record and a 2.10 ERA in 2012, with 61.1 innings, walking 18, striking out 52 and earning two saves … Hit .328 with five doubles, one triple, 15 RBI and seven steals at the plate in 2012 … As a senior, was named second-team all-state, all-district and all-region, ranking as the No. 17 player in the state … As a junior, earned all-district and all-region honors, playing in the Junior All-State Game and ranking as one of the top 50 players in the commonwealth … Helped lead his team to the district championship as a sophomore, junior and senior… In 2011, Male earned a No. 1 ranking in the state and in 2012, Male was ranked as high as No. 18 in the nation … Team won the region and advanced to the state semifinals in 2010 … Also played football for four seasons and basketball as a freshman … Football finished as the state runner up in 2011, winning the district championship … Led football team in receptions, yards, yards after catch and touchdowns while starring at wide receiver in 2012 … Was a four-year member of the academic honor roll and with a 3.5 GPA or higher, was a member of the Beta Club … Was a region finalist for the Governors Scholar Program.

Personal
Full name is Blake Richard Oyler … Son of Sean and Holly … Has an older brother, Jordan (22) … Uncle Gus Oyler attended UK … Comes from an athletic family, as father Sean played basketball at Western Kentucky and North Dakota State, mother Holly was a cheerleader at Louisville, grandfather played quarterback at Louisville and in the NFL and great grandfather, Richard Oyler was drafted by the Reds organization.