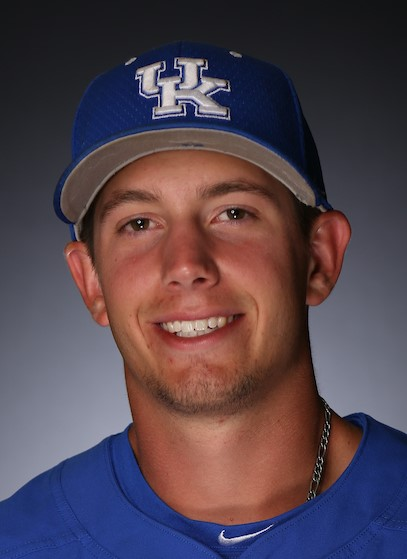 Outlook
Should be improved after a year of experience in the SEC…Had second consecutive strong summer…Was up and down in 2017, mostly due to walks…Coaches dropped his arm slot down in the fall to be more of a true sidearmer…Now sits mid-80s with a slider and a changeup…Coaches see him as a weapon in right-on-right matchups.

2017 SUMMER
Pitched in six games with the Bethesda Big Train of the Cal Ripken Collegiate Baseball League…The Big Train were the Ripken League champions for the second consecutive season…Played with UK teammate Luke Heyer…Started three games and posted a 3.29 ERA in 13.2 innings…Allowed 11 hits, only two of which were for extra bases…Struck out 10 but walked 11…Opponents hit just .212 against him…Did not allow a run or hit in 1.1 innings in two playoff appearances.

2017
Appeared in 11 games, all as a reliever…Recorded a 3.68 ERA in 7.1 innings, allowing eight hits and three earned runs…Walked nine, struck out one and hit two batters…Made his collegiate debut on 2/28 at Old Dominion…Started his career with nine consecutive scoreless appearances.

2016 SUMMER
Appeared in nine games for the Amsterdam Mohawks of the Perfect Game League…Team won the league championship…Had a sensational summer, posting a 4-2 record with a 1.00 earned run average in nine starts…Threw 44.1 innings, allowing just 27 hits and striking out 39…Was named an East All-Star…Pitched at least four innings in all nine games, yielding two or less earned runs in each…Earned a win in his lone playoff start, going 6.0 innings while giving up two hits, walking none and striking out eight batters.

HIGH SCHOOL
The Belleville News-Democrat Small-School (Class 1A-2A) Baseball Player of the Year by area coaches … First-team all-state as a senior and a two-time all-conference honoree (first team) … Set school records for strikeouts (111) and wins (eight) in a season … Went 8-1 with a 1.62 ERA in 58.2 innings, earning a save and striking out 111 with 28 walks … Hit .379 with 33 hits, 30 runs, seven doubles and 16 RBI as a senior, stealing 23 bases … Coached by Brett Isaacs, where he also played football and basketball as a freshman and sophomore … Led team to the state championship as a junior, a runner-up finish as a sophomore and regional championship as a senior … A great academic, a member of the National Honor Society, graduated with a 4.68 GPA and a Youth Salute Finalist and winner.

PERSONAL
Full name is Austin Patrick Keen … Son of Brian Keen and Gina Costello … Born in St. Louis … Major is Biology…Has two brothers, Rorey (18) and Jay (25), and a sister, Ireland (15) … Father played baseball at Western Michigan…Favorite MLB team is the St. Louis Cardinals…Wears No. 22 in honor of former MLB infielder David Eckstein, who wore the same number with the Cardinals.