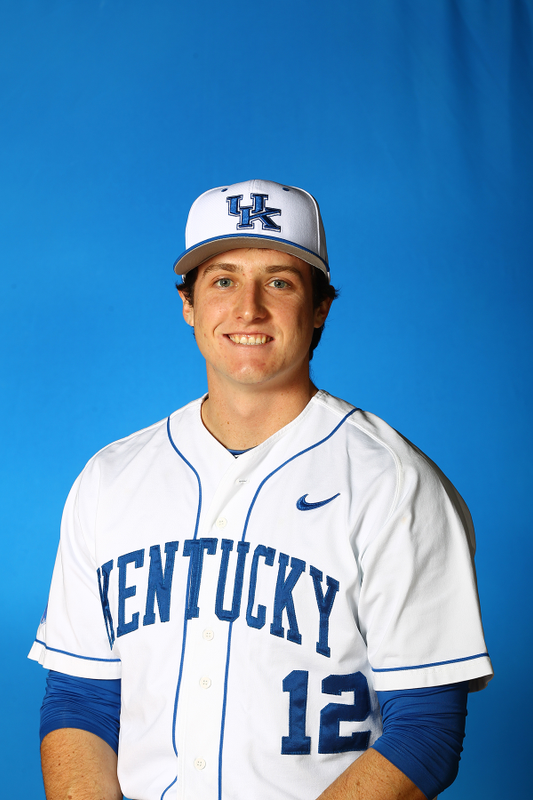 Outlook
Stepped into the UK pitching staff in his debut season and was a workhorse, serving nearly every role … Versatile right-hander who throws strikes and has an aggressive mentality in attacking hitters … Starred in the SEC Tournament with a 1.59 ERA in 5.1 innings, including a four-inning save in an elimination-game win over Alabama in Hoover, Ala. … Was thrust into the weekend rotation after an injury to Kyle Cody in week four, making eight of UK’s 10 SEC weekend starts … Best outing came in a rubber-match at Alabama on SEC’s opening weekend, coming an out away from a complete-game win, before allowing a game-tying homer with two outs in the ninth to suffer the no decision … Had a heroic relief outing at Murray State in UK’s regular-season non-conference finale that went 12 innings, working 4.2 innings to keep UK in the game … Was the first arm called on in relief in UK’s NCAA Tournament opener vs. Kansas, taking over with two outs in the first inning and working 4.1 innings to keep UK in striking distance … Was the conference pitcher of the year in his final season at Cuesta College in 2013.

2014
Had a solid season as a workhorse in the UK pitching staff, serving as a long reliever, middle reliever and weekend starter … Appeared in 19 games with 10 starts, with a 3.94 ERA and a 2-5 record, earning one save … Worked 75.1 innings, allowing 80 hits and 20 walks, striking out 37 … Had a strong pair of relief outings in the SEC Tournament, working 5.1 innings and allowing one run with a 1.59 ERA … Inherited six runners on the year, allowing three to score … Appeared in 10 SEC games with eight starts, owning a 1-5 record and a 4.78 ERA in 49 innings, walking 14 and striking out 21 … Was 1-0 with a 2.39 ERA in nine games and two starts vs. non-SEC foes, with one save in 26.1 innings, allowing 25 hits and six walks, striking out 16 … Worked in 12 games with eight starts vs. SEC opponents, with a 1-5 record and a 4.45 ERA with one save, working 54.2 innings, allowing 14 walks and striking out 22 … In nine home games, with six starts, had a 1-2 record and a 3.48 ERA in 33.2 innings … Worked in six away games, with four starts, tossing 30 innings … Tossed 11.2 innings in neutral site games … Worked in eight games with three starts in games that UK won, with two earned runs and a 0.67 ERA … Had a 3.19 ERA in 31 innings in March, a 7.11 ERA in 19 innings in April and had a 2.38 ERA in 22 innings in May … Made his UK debut with 1.2 innings vs. VMI, allowing one run on a double … Worked a shutout inning in UK’s home opener vs. Wright State … Made his first career start in the second game of a doubleheader vs. Cincinnati in midweek action, tossing four innings and allowing one earned run while working on a pitch count after throwing 10 pitches four days earlier and having the ability to start on the next Sunday … Did earn that start in the four-game Ball State series, working 6.2 innings for his first career win, allowing one run … Made his first career SEC start and had a nearly historic outing at Alabama, taking a 3-1 lead with two outs into the bottom of the ninth inning, before surrendering a game-tying two-run homer, with Alabama hitting a walk-off homer in the 10th inning … Worked 5.1 innings and allowed four earned runs vs. No. 1 South Carolina, … Worked 5.2 strong innings the following week at No. 5 Vanderbilt, allowing three runs as a tough-luck loser … Worked five innings without allowing an earned run in a no-decision vs. No. 12 Florida … Allowed four runs in six innings vs. Missouri, before allowing eight runs in four innings at Texas A&M and four runs in four innings vs. No. 12 Ole Miss … Bounced back with 4.2 innings at Tennessee, allowing two runs on two hits, but suffering his fifth loss … Moved to the bullpen the next weekend, tossing a shutout inning vs. Auburn, before shining with 2.1 innings of shutout relief at Murray State in a 13 inning marathon … Worked 4.2 shutout innings in relief at Georgia … Made his SEC Tournament debut with four shutout innings for a save vs. Alabama in an elimination game, clinching UK’s 7-1 win … Worked 1.2 innings four days later vs. Florida, allowing one run on five singles … Allowed three runs in 4.1 innings vs. Kansas in the opener of the NCAA Tournament, as he was the first reliever called on after UK starter Kyle Cody struggled to get two outs in the first inning.