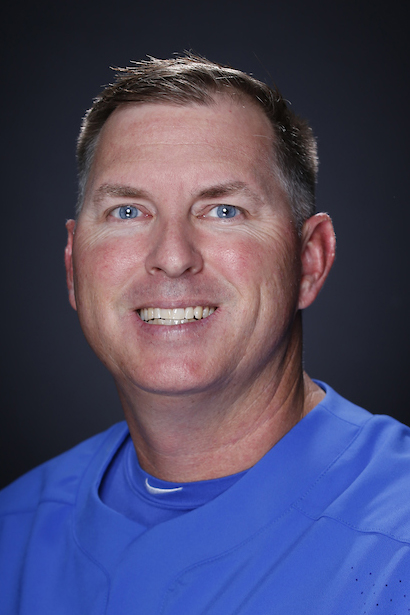 Dan Roszel is in his second season as the Wildcats’ pitching coordinator and came to Lexington after nearly two decades of high-level success at four programs, including nine seasons at East Carolina where the Pirates finished in the nation’s top 50 in earned run average seven times. East Carolina advanced to six NCAA Regionals during his nine years on staff.

“Dan is exactly what we were looking for,” Mingione said. “He has a track record of winning, he’s committed to helping student-athletes win all areas of their lives, and he’s a proven developer of Major League Baseball pitchers. He’ll be an invaluable resource for our program.”

In 2019, Roszel disciple Jake Agnos was named to six All-America squads and set the American Athletic Conference’s single-season strikeout record with 145 in 102.0 innings on his way to being named the 2019 AAC Pitcher of the Year. He was selected by the New York Yankees in the fourth round of this summer’s draft.

In his 20 seasons as a coach, Roszel has seen 33 of his pitchers sign professional contracts, headlined by MLB all-star Chris Sale, who he coached while at Florida Gulf Coast. Sale, who has finished in the top five of the American Cy Young Award vote six times, was selected 13th overall by the Chicago White Sox in the 2010 draft. In 2014, Hoffman became Roszel’s highest draft pick when taken ninth overall by the Toronto Blue Jays.

After completing his playing career at the University of North Florida, Roszel broke into the coaching ranks and within three seasons had joined Gardner-Webb University, where he saw two first-day draftees in four years. From there, Roszel went to Florida Gulf Coast for two seasons, helping the Eagles win an Atlantic Sun Conference title in its first season at the Division I-A level, the only team in NCAA history to accomplish that feat. Before settling at East Carolina, he spent two seasons at College of Charleston, where three of his pitchers were selected in the 2010 MLB Draft as the Cougars came within one win of a Super Regional appearance.

“My family and I are extremely excited to join the UK family,” Roszel said. “Nick Mingione’s vision for the program of developing young men as students, people and players, his leadership style and the Lexington community were all important factors in our decision. This is a dream come true. We can’t wait to get to work, invest in the community and start building lasting relationships.”

Roszel, a 2000 graduate of North Florida, and his wife Melissa have three children, Madyson, Makenna and Clayton. Roszel received his degree in criminal justice with a minor in political science.

What They Are Saying About Roszel:
“Coach Roszel, he really just caught my eye, with the guys he’s had and just how well he’s developed some of those guys. I really trusted him in my development. Coach Roszel really taught me how to pitch, being able to locate all my pitches. I just have a real natural feel for the game now.” – Colorado Rockies pitcher Jeff Hoffman

“I’m more pro ready after the experience with East Carolina and working with the best pitching coach in the world, Dan Roszel. I’ve learned so much about pitching (from him).” – Oakland Athletics pitcher Jharel Cotton

“During my junior year, we got a new pitching coach – Dan Roszel – and we clicked. He saw something in my mechanics. After one year working with him, I became a consistent starter. Coach Roszel helped me learn how to pitch. By my junior year, I was up to 95-96 and I began to earn his trust. We worked well together and we talked a lot about how to set up hitters, where to concentrate throwing them and reading swings.” – MLB veteran pitcher Mike Wright

“Dan Roszel is a fantastic hire for Kentucky. He’s long been regarded as one of the best pitching coaches on the East Coast because he has a great temperament for teaching and a keen baseball mind. His track record speaks for itself: he has a real knack for helping young arms unlock their potential. And he also deserves plenty of credit for identifying promising talent on the recruiting trail, then helping them develop into impact players at the collegiate and pro levels. He’s a man of high character, and he’ll do great things at Kentucky.” – D1Baseball.com national analyst Aaron Fitt