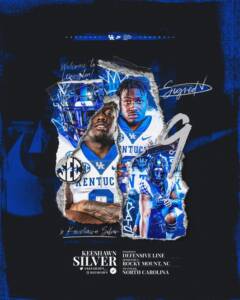 Former North Carolina defensive lineman Keeshawn Silver has signed to play football at the University of Kentucky, head coach Mark Stoops announced Monday. He will be eligible immediately and will have three seasons of eligibility remaining.

“We are very excited about the addition of Keeshawn to our program,” Stoops said. “He has unlimited and extremely high potential. He also adds great size and depth across our front line and we can’t wait to get him here and get to work.”

Silver, a 6-foot-4, 315-pound sophomore from Rocky Mount, North Carolina, played two seasons at North Carolina, totaling four tackles in six games played. He redshirted the 2021 season, appearing in three games vs. Georgia State, Virginia and Wofford. In 2022 as a redshirt freshman, he saw action in three games vs. FAMU, Virginia Tech and Miami. He posted a career-high three tackles vs. the Hurricanes.

Besides football, the multi-sport athlete also ran track and played basketball. He averaged 7.1 points and 6.1 rebounds over his three-year career.

Silver, who has a nickname of “Big Kountry” was raised by his grandmother, Queen Silver, as his mother, Cynthia, passed award during his childhood.