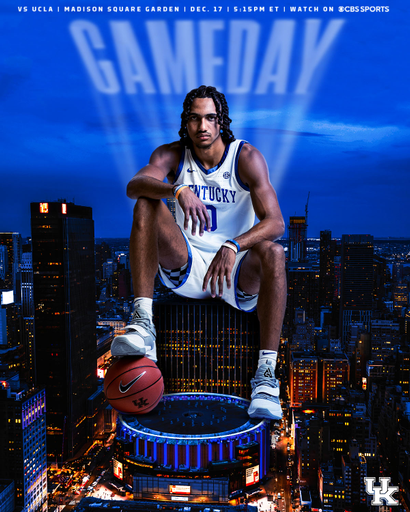 When thinking about the programs with the most success in NCAA Tournament history, two names immediately come to mind – Kentucky and UCLA. The Bruins have won a record 11 NCAA Tournament titles, while Kentucky has won eight titles, as well as more tournament games than any other school (tied with North Carolina).

The Cats and the Bruins meet on the hardwood on Saturday in New York’s Madison Square Garden as part of the 2022 CBS Sports Classic. North Carolina and Ohio State meet in the other contest.

UK head coach John Calipari has been impressed with what he has seen from Mick Cronin’s Bruins so far this season.

“They’re really good,” Calipari said. “The biggest thing is, they’re really physical. If you don’t fight, you have no chance this game. This will be a really hard game for us.”

The Cats have won four straight games since losing to Gonzaga on Nov. 20. Calipari has been pleased with his team’s improvement since that game and he hopes that the improvement will show against No. 16 UCLA.

“I’m anxious to see how we perform,” Calipari said. “I think we’re better than we were three weeks ago. We’re playing more together. We’re doing things together better. I think there’s less confusion on what we’re doing.”

Kentucky beat Yale 69-59 on Saturday after topping Michigan 73-69 in London on Dec. 3. Defending National Player of the Year Oscar Tshiebwe leads the Cats in scoring (16.1 points per game) and rebounding (13.3 rebounds per game). Antonio Reeves is averaging 13.9 points per game for the Cats, while Jacob Toppin (11.9 ppg) and Cason Wallace (10.7) also average double figures in scoring.

As for Saturday’s contest against UCLA, Calipari knows there will be a ton of interest in the game.

“The tickets have been impossible,” Calipari said. “This may be the toughest ticket (to get) since I’ve been here. There are no tickets.”

As it should be when the two schools with the most NCAA Tournament titles meet in one of basketball’s most historic venues.

In the Big Apple

Kentucky has historically performed well under the bright lights of New York. The Wildcats are 38-15 in games in the New York City area, including wins in 10 of the last 13 games.

In the CBS Sports Classic, Battling the Bruins

Kentucky improved to 4-4 in the CBS Sports Classic after topping North Carolina, 98-69, a year ago in Las Vegas after the event was reshuffled because of COVID-19 issues in the Ohio State and UCLA programs.

North Carolina leads the four schools in the CBS Sports Classic with a 5-3 record. Ohio State is 4-3 and UCLA is 2-5 in the event.

All-time, UK leads the series against the Bruins, 8-7. The teams have split two matchups in the CBS Sports Classic, with the Wildcats earning an 83-44 victory in Chicago in the 2014-15 season, and the Bruins picking up an 83-75 win in New Orleans in the 2017-18 campaign.

• Sahvir Wheeler leads the SEC and ranks 17th nationally with a 3.47-to-1 assist-to-turnover ratio. Wheeler also leads the conference and ranks eighth nationally with 6.5 assists per game
• Since the start of the 2019-20 season, his freshman season at Georgia, Wheeler’s 591 total assists rank second nationally, only behind the 669 by Yuri Collins of Saint Louis
• Cason Wallace ranks sixth in the SEC and 19th nationally with 2.44 steals per game. The 2.44 steals per contest are the most in the country among freshmen
• Wallace has totaled 39 assists and 22 steals while shooting 52.9% from the field. The freshman is one of eight players nationally with at least 35 assists and 20 steals while shooting better then 50% from the field
• Oscar Tshiebwe’s 22-point, 18-rebound game against Michigan State was the third such contest of his UK career. He now has three of the six 20 or more and at least 18 rebounds in a game by an SEC player in the last 10 seasons. No other player has more than one and the feat had not been accomplished since South Carolina’s Sindarius Thornwell did so against Alabama on Feb. 7, 2017
• Tshiebwe also has tallied a pair of 20-point, 15 rebound games so far this season and has five over the last two seasons. He has nine of the 51 20-point, 15-rebound contests by SEC players in the last 10 seasons
• Tshiebwe is one of two players in the NCAA this season averaging more than 15 points and 13 rebounds per game (Zach Edey – Purdue)
• Tshiebwe is second in the country with 13.3 rebounds per game
• He is second in the country with 4.86 offensive rebounds per game and fifth with 8.43 defensive boards per contest
• With 1,136 points and 973 boards, Tshiebwe is one of two players nationally to total at least 1,000 points and 950 rebounds over the last four seasons, joining North Carolina’s Armando Bacot (1,450 points, 1,104 rebounds)
• As a team, Kentucky has been one of the best nationally in keeping opponents from blocking their shots. UK is tied for sixth in the country, having only 16 shots blocked through nine games