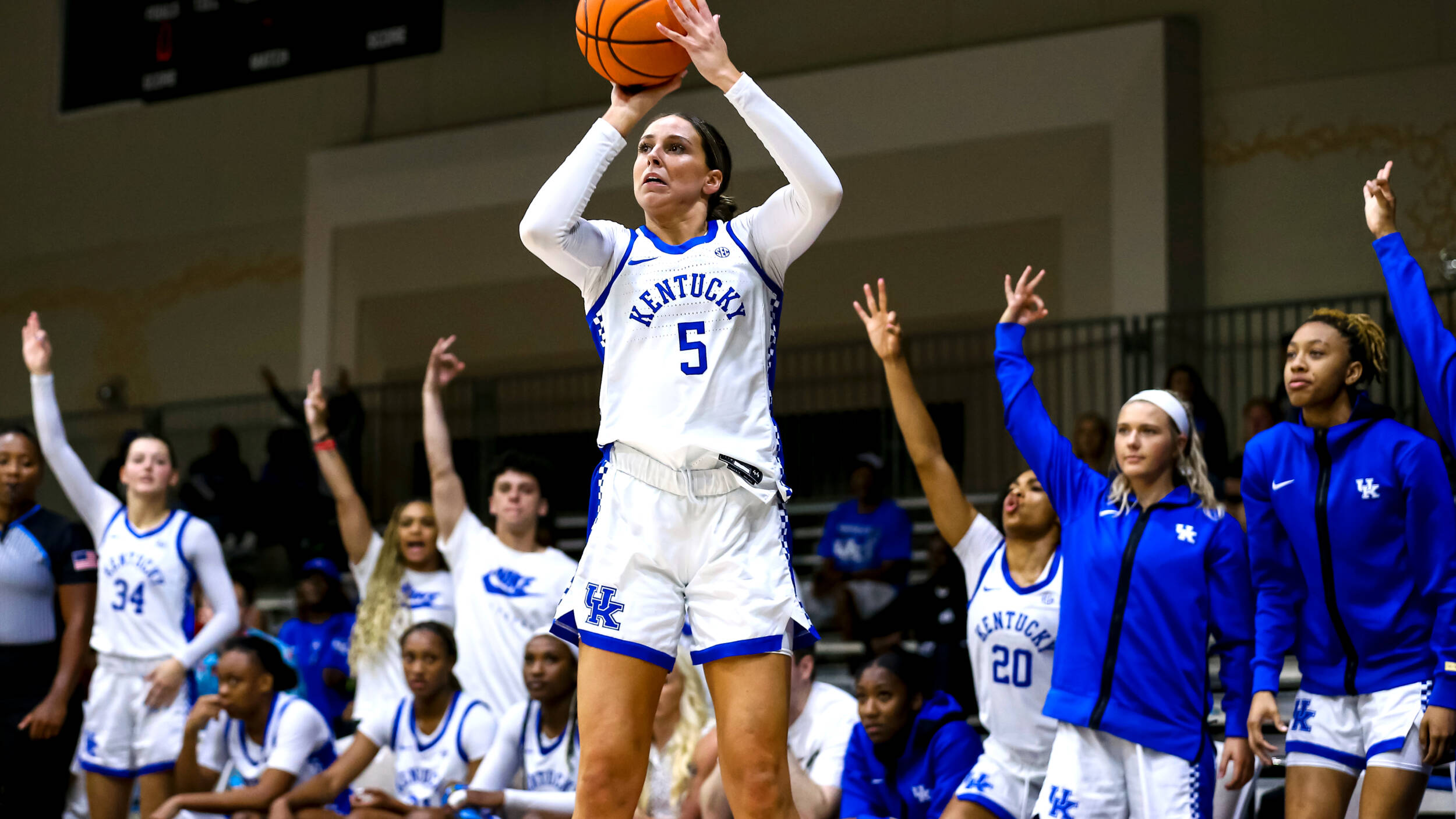 LEXINGTON, Ky. – The University of Kentucky women’s basketball program will play host to RV/No. 24 Louisville on Sunday, Dec. 11 at 1 p.m. ET inside Rupp Arena at Central Bank Center. The game, which will mark Kentucky’s fourth in-state matchup this season, will be broadcast on ESPN, with Dave O’Brien and Carolyn Peck on the call.

Doors will open one hour prior to the tip time. Big Blue Nation is encouraged to wear blue, and fans will receive free poms at the entrance.

But what would I wear?

Tickets are $10 (all ages) in reserved seating areas, while general admission tickets are just $8 for adults and $5 for children (ages 6-18) and seniors (age 65+). Children aged 5-years-old and under do not require a ticket in general admission areas.

Bags must adhere to the UK Athletics Clear Bag policy. Bags and items will be searched. To avoid additional touch points, fans are strongly encouraged to not bring unnecessary bags to Rupp Arena. More on UK Athletics’ Clear Bag policy can be found online here.

Fans can park in the Rupp Arena High Street Gate 1 parking lot. This lot will operate on a first-come, first-served basis at a cost of $20/vehicle. There are also more than 10,000 convenient parking lots located within a 10-minute walk of the arena. Visit the Rupp Arena Parking page to learn more about additional parking options.

The Wildcats are 7-1 this season, including 5-0 at home. The Cats will play inside Rupp Arena for the first time this season Sunday, while it will mark the first off two games that the team will play in the arena in 2022-23.

Kentucky is coming off its first true road game of the season after defeating Minnesota, 80-74, at Williams Arena in Minneapolis, Minnesota, last Wednesday. It marked UK’s first Big Ten Conference win in a true road game since Dec. 1, 2004, when Kentucky won at Northwestern, 70-63.

Jada Walker, a sophomore guard, led the team in scoring for the fifth time this season with 19 points. For the first time in 2022-23, Kentucky had four scorers in double digits, including Robyn Benton (18), Ajae Petty (16) and Blair Green (11). In fact, Benton has scored in double digits in all eight games this season.

Petty, a junior transfer from LSU, had her second straight double-double at Minnesota. She collected a career-high 16 points and grabbed a career-high tying 12 rebounds, while adding an assist and a steal, in a career-high 30 minutes of action.

Kentucky is shooting 44.2 percent from the field, while its averaging 75.4 points per game this season. More than 61.3 percent of its 235 field goals have been a product of its 144 assists. The Wildcats are second in the Southeastern Conference and are ranked 21st nationally in assists per game (18.0).

Maddie Scherr, a junior transfer from Oregon and a Florence, Kentucky, native, who will play in her first Kentucky-Louisville matchup Sunday, is responsible for a bulk of those dimes, leading the SEC and ranked toward the top of the nation in assists (50), assists per game (6.2) and assist/turnover ratio (2.94).

Meanwhile, as a team, the Wildcats continue to cause a stir on the defensive side of the ball, pacing the league and ranked top-10 nationally in turnovers forced (25.0). The Cats are also ranked first in the league and top-25 nationally in turnover margin (7.9). Kentucky has won the turnover battle in all but one game this season, while it has forced opponents to commit at least 20 turnovers in the last seven straight games.

Walker has proven to be a terror on that side of the ball, pacing the league in both steals (27) and steals per game (3.38).

Kentucky is holding its opponents to 38.3 percent from the field and less than 60.0 points per game.

Louisville is off to a 6-4 start on the season, including 1-1 on the road. The Cardinals have four players averaging double-digit scoring, including preseason All-America nominee Hailey Van Lith (20.0), Chrislyn Carr (11.1) and Morgan Jones (10.4). UofL is shooting 45.4 percent from the field and averaging 77.0 points per game. Meanwhile, its holding opponents to 39.7 percent from the field and 63.9 points per game.

Despite UofL winning the last five straight meetings (2016-21), Kentucky leads the all-time series with Louisville, 34-23. The Wildcats also lead the Cardinals in games played in Lexington, 22-6.