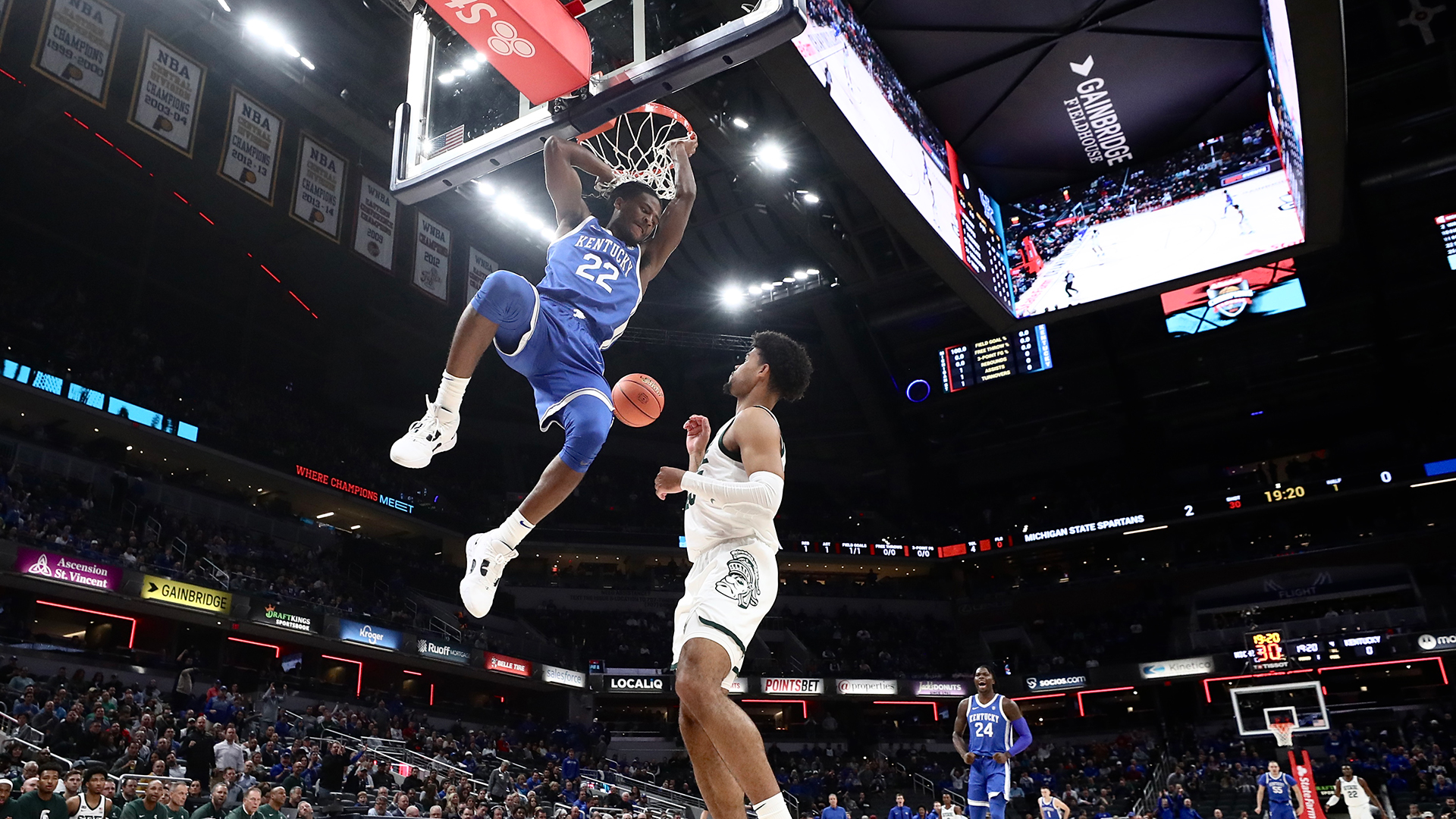 Defending National Player of the Year Oscar Tshiebwe returned to action for fourth-ranked Kentucky on Tuesday night against Michigan State in the Champions Classic. And, after missing the first two games of this season following a knee procedure, Tshiebwe seemingly picked up right where he left off last season.

Tshiebwe scored 22 points and grabbed 18 rebounds, his 18th consecutive double-double, and added four blocks for good measure. Even with all of that, Michigan State was able to hold off the Cats 86-77 in double overtime.

While Tshiebwe was certainly the story on this night, UK freshman Cason Wallace continued his strong early-season play as well. Wallace had 14 points, five rebounds, five assists and eight steals. The eight steals tied the Kentucky school record, which has been accomplished by three players previously (Wayne Turner in 1997, Rajon Rondo in 2005 and Ashton Hagans in 2018).

Kentucky (2-1) led late in regulation before Michigan State got a Malik Hall basket to tie the game at 62-62 with three seconds left. Kentucky’s heave at the buzzer missed.

In the first overtime, Kentucky led 71-69 before Hall struck again, this time with one second remaining. He tied the game and sent it to double overtime.

The bad news for the Cats, at that point, was that Tshiebwe had fouled out in the first extra session and UK was forced to play without him over the final five minutes.

That’s when Michigan State (2-1) took control of the game. The contest was tied 76-76 before the Spartans went on an 8-0 run to seal the victory.

UK head coach John Calipari took the blame for his team’s inability to get the job done down the stretch and in both overtimes.

“When you talk about late-game situations, that’s on me as a coach,” Calipari said. “They executed better than us and that’s on me.”

Kentucky got 16 points, eight assists and two steals from Sahvir Wheeler, as well as 10 points and four rebounds from Jacob Toppin.

The game was obviously very close throughout, but one area made at least a bit of a different. Michigan State hit 23 of 27 from the free throw line for 85.2 percent. Meanwhile, Kentucky made just 16 of its 24 charity tosses for 66.7 percent.

Kentucky gets right back to action on Thursday, hosting South Carolina State at Rupp Arena. Tipoff is set for 7 p.m. and the game can be seen on the SEC Network.