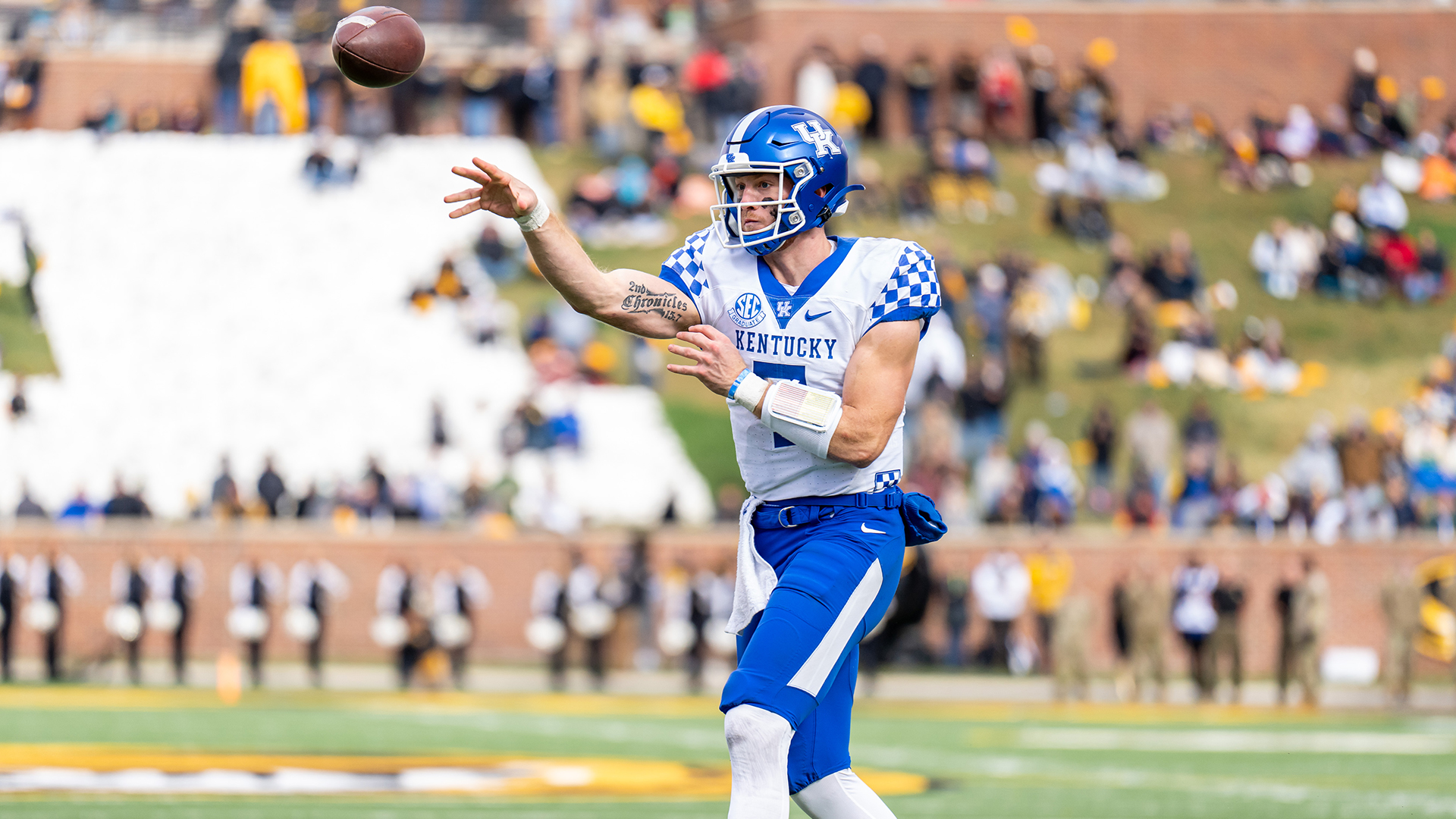 Kentucky Holds Off Missouri in Columbia

COLUMBIA, Mo. – Will Levis passed for three touchdowns, including what turned out to be the game winner in the fourth quarter, as No. 24 Kentucky held off Missouri 21-17 on Saturday at Faurot Field/Memorial Stadium.

Chris Rodriguez Jr. rushed 29 times for 112 yards in the game, while freshman Dane Key caught four passes for 53 yards and a pair of touchdowns, including the game winner.

Kentucky (6-3, 3-3 SEC) got a big effort from its defense in the victory. The Cats held the Tigers to 232 yards of total offense, including just 89 yards on the ground. Trevin Wallace led the Cats’ defensive attack with nine tackles, including a sack and three tackles for loss.

Missouri (4-5, 2-4) took the opening kickoff but the Kentucky defense forced the Tigers backwards on three plays and forced an early punt.

Kentucky wasted no time getting into Missouri territory, as Levis connected with Barion Brown for a 39-yard reception. Then, on a third-and-11, Levis hit Jordan Dingle for a 17-yard gain. A 12-yard rush by Rodriguez got the Cats to the Missouri four. Levis was sacked two plays later but on the following play, the UK quarterback hit Key over the middle for a nine-yard Kentucky touchdown. Matt Ruffolo added the PAT and the Cats grabbed an early 7-0 lead.

Missouri would drive into Kentucky territory on its next possession but the Cats defense got the stop, The Tigers would get a 44-yard field goal from Harrison Mevis to cut the UK lead to 7-3 with 5:17 to play in the first quarter.

Kentucky appeared ready to answer on its next drive, getting into Missouri territory on another Levis-to-Dingle connection. But the UK drive would stall and Ruffolo would miss a 43-yard field goal attempt and the score remained 7-3 with 1:23 left in the first quarter.

The Tigers would go three-and-out on their final possession of the first quarter, then a short punt gave Kentucky the ball on their own 47, just before the end of the period, which ended with UK ahead 7-3.

Kentucky would punt on its next possession, with Colin Goodfellow pinning the Tigers inside their own five. The Tigers would drive to near midfield before quarterback Brady Cook fumbled and UK’s Jordan Wright recovered at the Missouri 43.

The Cats would get one first down but could not advance any further, forcing a 47-yard field goal attempt from Ruffolo. But the kick, into the wind, came up just short and the score remained 7-3.

Missouri could do nothing with its next possession, which saw Wallace have a sack and two other tackles. The Tigers would punt and UK took over at its own 11 with 4:55 left in the half.

Kentucky would go three-and-out on its next possession and would punt the ball back to the Tigers. Missouri would take over at the UK 47 yard line. The Tigers would face a fourth-and-one and Cook tried to sneak up the middle, but JJ Weaver would make the stop and the Cats took over at their own 38.

The Cats would punt on the ensuing possession, and Missouri would take a knee to close the half, which ended with UK holding a 7-3 advantage.

Kentucky got the first possession of the second half and was unable to do anything with it. The Cats punted, then Missouri attempted to do the same, but Missouri punter Jack Stonehouse lost the grip on the ball, then tried to run for the first down, coming up short and giving the Cats the ball at the MU 34.

Kentucky would get into the red zone and would get on the doorstep of the goal line when Levis connected with Tayvion Robinson for an 18-yard completion to the Missouri one. Two plays later, Levis found Dingle wide open in the end zone for a one-yard score. Ruffolo added the PAT and the Cats led 14-3 with 5:47 left in the third.

The teams would exchange punts before Missouri put together one of its best drives of the day. The Tigers got deep into Kentucky territory as the third quarter ended with UK leading 14-3.

As the fourth quarter started, the Tigers were at the UK two yard line. It took four chances, but on fourth-and-goal from the one, Cook kept it around left end for the Tigers’ first touchdown of the day. The Tigers would go for two, but Cook’s pass sailed high and the try was no good, leaving UK with a 14-9 lead with 13:09 to play.

Kentucky would punt on its next possession and Missouri would strike again. The Tigers drove into UK territory, then Cook scrambled for a 20-yard touchdown, giving Missouri its first lead of the game. The Tigers went for two and Cook connected with Tauskie Dove in the back of the end zone, giving Missouri a 17-14 lead with 8:07 to play.

The ensuing kickoff was a short one, and UK took over at its own 42. The Cats got a 19-yard completion from Levis to Key, then a three-yard rush by Rodriguez, a play that also had a 15-yard Missouri penalty for a horse collar tackle, getting the Cats into scoring range.

The Cats appeared to score on a pass from Levis to Brown, but the play was called back due to a holding penalty. Two plays later, Rodriguez went around left end, but as he stretched for extra yardage, he appeared to fumble. However, a replay review overturned the call and Kentucky retained possession. Kentucky would take advantage of its second chance when Levis hit Dane Key for a 22-yard touchdown to give UK the lead back. Ruffolo added the PAT and the Cats led 21-17 with 5:18 left in the game.

On the next Missouri possession, the UK defense did what it had done the majority of the day, limiting the Tigers to virtually nothing, then forcing a punt. This one gave the Cats the ball at their own 35 with 4:13 to play.

Kentucky could do nothing with the possession and was forced to punt. But the snap went over Goodfellow’s head. The fifth-year senior scrambled back to pick up the ball at the two, then kicked it away and was hit by a Missouri defender, resulting in a roughing the punter penalty that gave UK an automatic first down with 2:25 to play.

From there, the Cats would run the clock down under a minute before punting (this time with backup Wilson Berry) the ball back to the Tigers with 38 seconds left. Missouri would not be able to move the ball and the Cats held on for the victory.

Kentucky finishes the season with three consecutive home games, the first of which comes next week against Vanderbilt. Kickoff is set for noon ET and the game can be seen on the SEC Network.