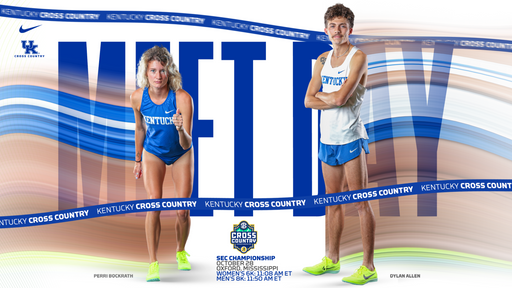 OXFORD, Mississippi – The Kentucky men’s and women’s cross country teams will compete at the Southeastern Conference Championships on Friday in Oxford, Mississippi.

Bockrath and Herman have paced the team throughout the season, finishing first and third, respectively at the North Alabama Showcase in September as the Wildcats placed second as a team. Bockrath was named SEC Co-Runner of the Week in recognition of her victory and she earned the same honor a week later as she finished eighth in a nationally renowned field at the Cowboy Jamboree in Stillwater, Okla.  The duo finished the regular season by sweeping first (Bockrath) and second place (Herman) two weeks ago at the Panorama Farms Invitational in Earlysville, Va.

“Perri and Tori have been outstanding all year,” said UK assistant coach Hakon DeVries, who oversees the Wildcat cross country and distance runners. “Obviously at the SECs the team finish is how we’re judged and we want to improve from last year.”  The UK women finished fourth a year ago, with Herman finishing fifth individually and Bockrath 13th.

“Our men’s team has been building momentum throughout the season for this opportunity,” DeVries said. “We’re excited to see where we are.”

The UK men’s top performance was second place at the North Alabama Showcase.  Dylan Allen was the leading runner that day and also at the Cowboy Jamboree.  Jake Allen paced the Cats at the Panorama Farms event.  The Wildcats were sixth at last year’s SEC meet and Aaron Withrow is the top individual returnee as he landed in 34th.

The championship has not been held in Oxford since 2009, so UK visited the Ole Miss Golf Course on Thursday in order to visualize the race execution for Friday.

“The course is pretty flat and there hasn’t been much rain in Oxford, so the course should be quick,” DeVries said.

The Wildcats are assured of at least one accolade on Friday as Tori Herman will be presented with the SEC Women’s Scholar-Athlete of the Year award that was announced Wednesday.

“Being able to rack up an award like that is a great honor for our program,” DeVries said. “Hopefully it sets the tone for the day.”