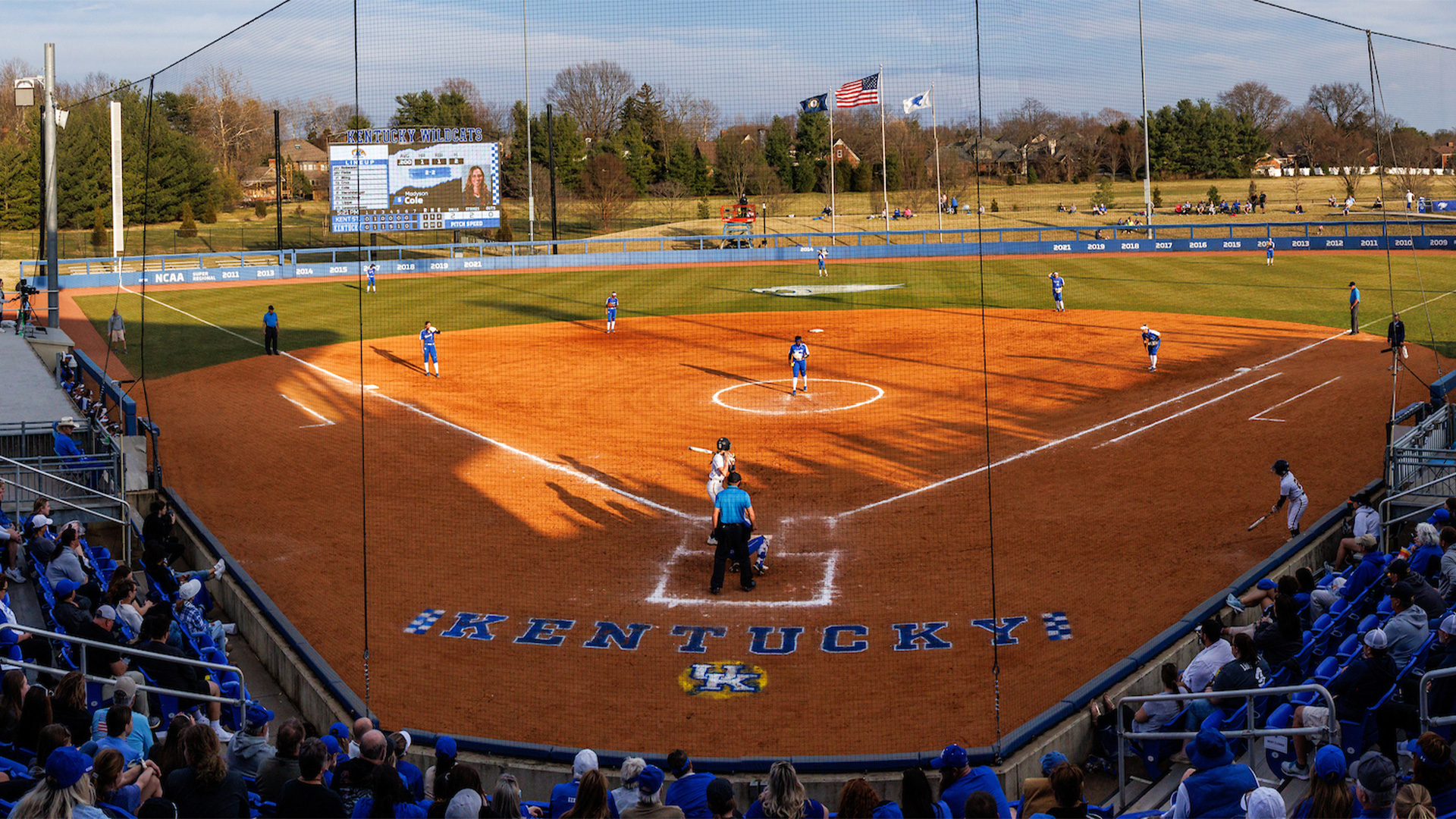 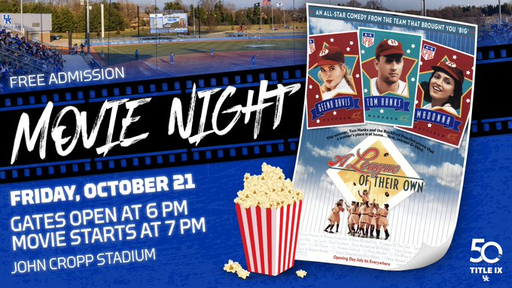 LEXINGTON, Ky. – The University of Kentucky Athletics Department will host a free movie night on the big screen at John Cropp Stadium on Friday, October 21. UK will screen the 1990s classic “A League of Their Own,” which tells a fictionalized account of the real-life All-American Girls Professional Baseball League (AAGPBL) during the World War II era.

The event, part of UK Athletics’ year-long celebration of the 50th Anniversary of Title IX, is open to the public. Gates open at 6 p.m. ET and the movie begins at 7 pm. Fans can sit in the stadium seats or on the grass.

In the event of inclement weather, the outing will be canceled, but the forecast looks pretty good. If inclement weather happens, fans should remember Jimmy Dugan’s famous words: “there’s no crying in baseball!”

Members of the Kentucky Athletics “Title IX Top 50” team honoring the 50 greatest Wildcat women’s athletes of the Title IX era were recognized on stage at Big Blue Madness as well as during the UK football game vs. Mississippi State during Homecoming Weekend.

The UK Athletics Title IX Top 50 is one of the leading parts of the department’s multi-faceted celebration of the 50th Anniversary of Title IX, which includes commemorative events like the and experiences like the movie screening, multimedia coverage and community activations.

UK Athletics kicked off its 50th Anniversary celebration of Title IX inside Rupp Arena at Central Bank Center on Feb. 2 when all of the department’s women student-athletes were honored on the court for “National Girls and Women in Sports Day.”

All of UK’s 12 women’s sports teams, plus the women of the coed rifle team, and the cheerleading and dance teams took the court at halftime of the Kentucky Men’s Basketball game in front of 20,000 members of Big Blue Nation.

In celebration of Mother’s Day, UK Athletics honored many of the department staff super moms who were elite athletes in their playing days with a fun video featuring their children offering a unique perspective on the legacy Title IX continues to build on.

Athletics Director Mitch Barnhart was part of a distinguished group of “SEC Trailblazers” from all 14 SEC member institutions that were honored at the SEC Women’s Basketball Tournament, which the Wildcats won.

Each of the honorees contributed to the advancement of women and the growth of women’s athletics at their universities and within the Conference.

Throughout the year, UK will continue its decades-long legacy of growing access and opportunity to women’s athletics while renewing its commitment to equity.

Title IX at 50
“No person in the United States shall, on the basis of sex, be excluded from participation in, be denied the benefits of, or be subjected to discrimination under any education program or activity receiving Federal financial assistance.” – Signed by President Richard Nixon on June 23, 1972.

While the federal legislation applied to the entire education sector, some of the greatest impacts of Title IX applied in the athletics field.

Two UK women’s sports teams, volleyball and women’s basketball, won SEC Championships in 2021-22, and the coed rifle team won a second NCAA Team title in a row. Riley Gaines was named SEC Community Service Leader of the Year in 2022, and many other women athletes earned prestigious academic and athletic honors throughout the year. 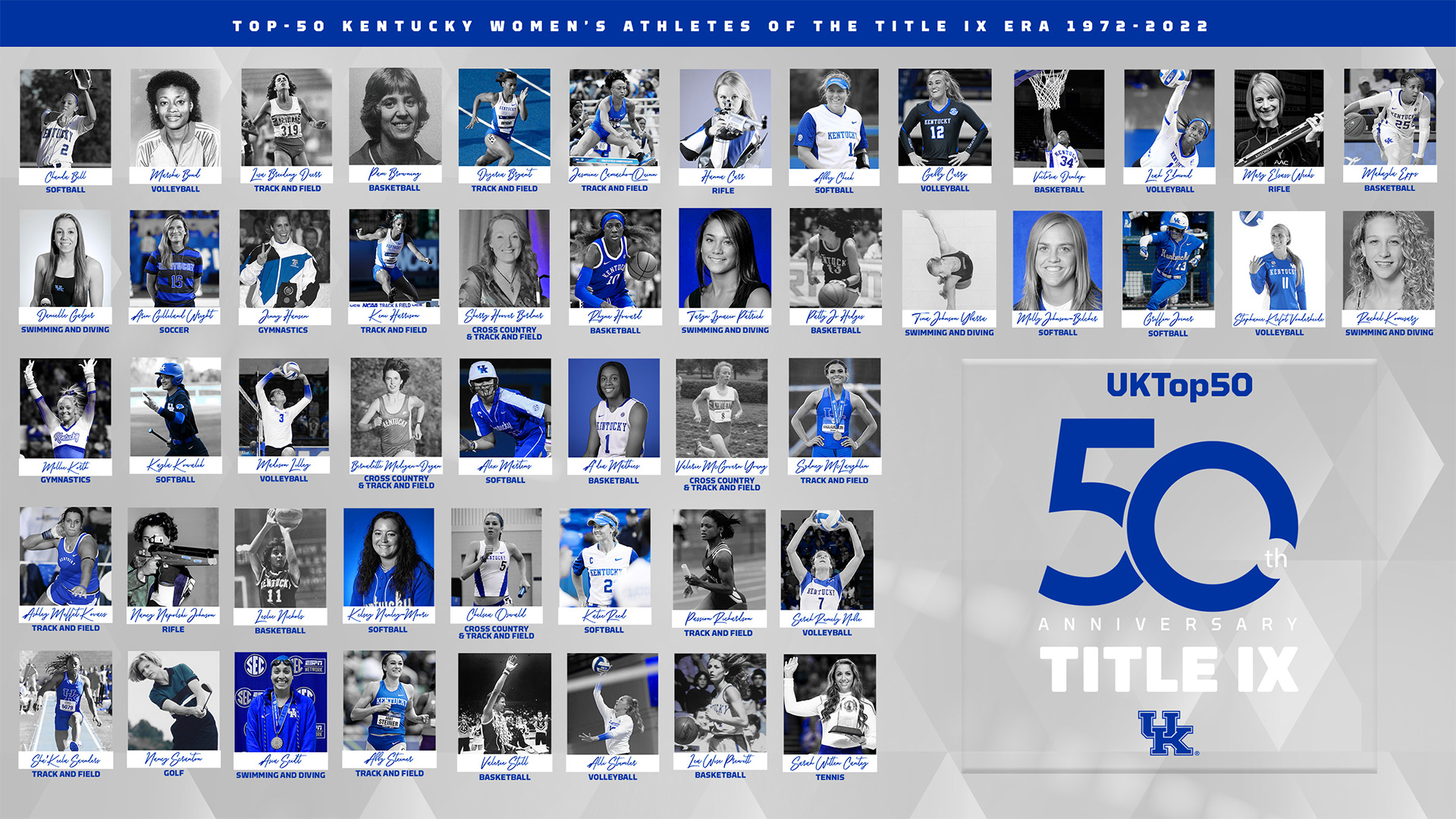