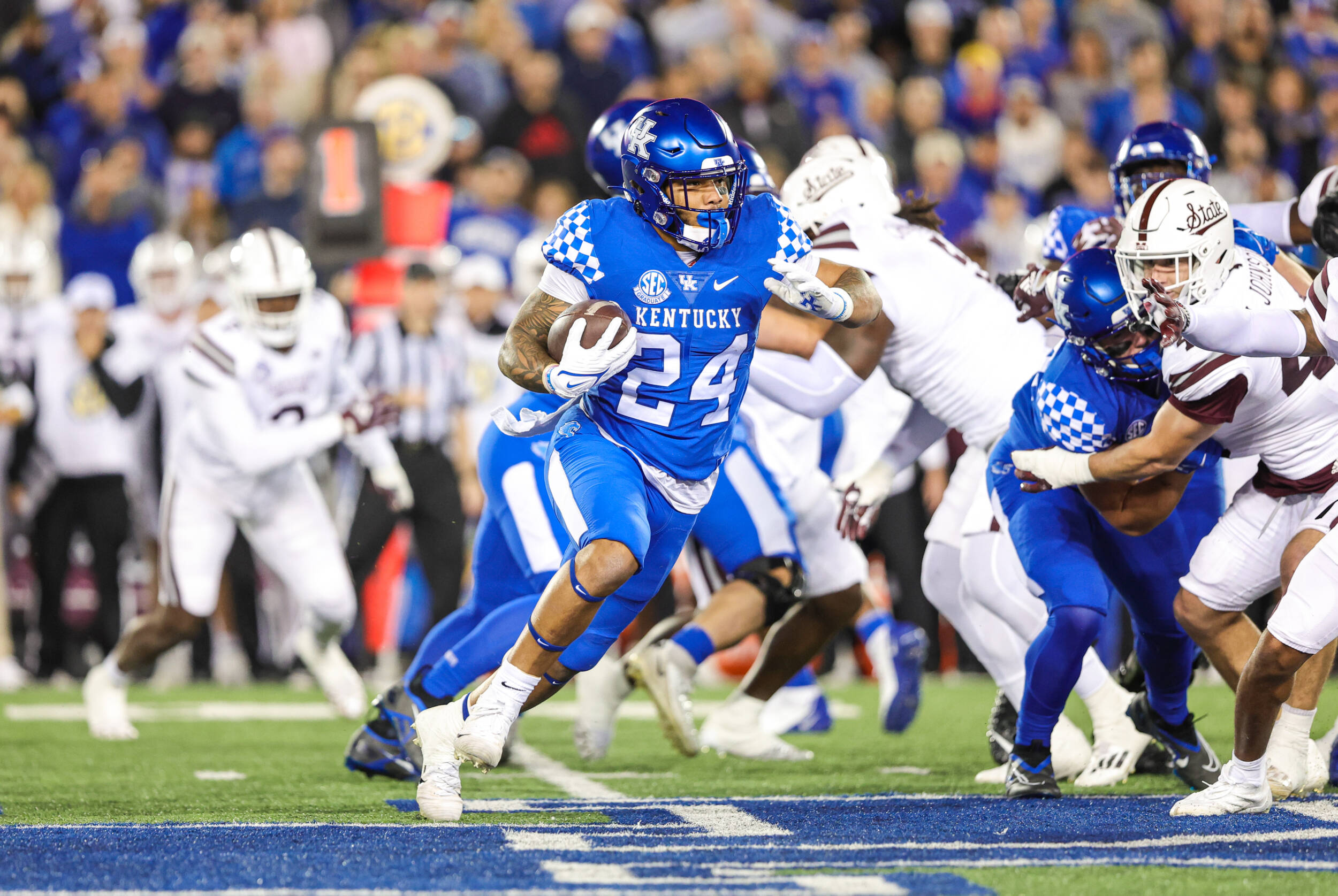 Mississippi State took the opening kickoff and quickly crossed midfield. But the Cats’ defense would force a punt, and UK would take over at its own 20.

Kentucky took the ball and was able to advance into Mississippi State territory. However, when Levis connected with Rahsaan Lewis, it appeared to be enough for the first down. Instead, Lewis was stripped and MSU recovered at its own 36 with 7:45 left in the first.

MSU was forced to punt on its next possession and the Cats appeared to have the game’s first big play. Barion Brown took the punt and raced down the right sideline for an apparent touchdown. But the Cats were flagged for a block in the back, negating Brown’s big effort.

Kentucky appeared to be stopped on its next possession before Levis hit Dane Key down the left sideline on a 31-yard completion, taking UK near midfield. Later in the possession, the Cats would convert a fourth-and-one on a Levis quarterback sneak. But a couple of penalties set Kentucky back and the Cats were set to punt as the scoreless first quarter expired.

MSU would break the scoring drought on its next drive. The Bulldogs would cover 57 yards in 13 plays and would get a 48-yard field goal from Massimo Biscardi to take a 3-0 lead with 8:24 to play in the first half.

Kentucky would sustain a drive on its next possession, riding on the back of Rodriguez, who carried for 27 yards on the drive. UK would face a fourth-and-eight from the 33 and would attempt a 51-yard field goal by Matt Ruffolo. The kick had the distance but sailed wide left and the score remained 3-0.

Kentucky would take advantage of the final possession. The Cats, with the help of a couple of MSU penalties, got into the Bulldogs’ red zone but would not be able to get into the end zone. Ruffolo would be called upon again, and would convert from 28 yards out, tying the game 3-3 with four seconds left in the half. That would be the halftime score.

Tied up at halftime. pic.twitter.com/HTkRDyr6DD

The Cats would get the opening possession of the second half and the Cats advanced into MSU territory quickly, but at a cost. Levis hit Brown on a 33-yard completion. However, Levis injured his left shoulder on the play and was forced out of the game. Backup quarterback Kaiya Sheron entered as the Cats got into the MSU red zone. But the drive stalled and Ruffolo was called on for a field goal, this one from 36 yards out, which Ruffolo converted, giving the Cats a 6-3 lead with 11:34 left in the third quarter.

MSU would answer with a drive that produced the game’s first touchdown. The Bulldogs would cover 75 yards in eight plays and would end when, on fourth-and-one from the one, Rogers connected with tight end Austin Williams in the front corner of the end zone for the score. Biscardi added the PAT and Mississippi State led 10-6 with 8:28 left in the third quarter.

Levis returned on the next drive, when the Cats when back to the ground game. Kentucky gave the ball to Rodriguez on four consecutive plays, the fourth of which was a 47-yard scamper that put the senior over 100 yards for the game and got the Cats to the MSU eight.

From there, UK tried Rodriguez three times but he was not able to get into the end zone. Then, on fourth-and-goal from the MSU three yard line, Levis connected with Lewis for a touchdown, the first of Lewis’ career. Ruffolo added the PAT and Kentucky led 13-10 with 4:10 left in the third quarter.

First career TD catch for @RahsaanL! Clutch from @will_levis too.

The third period would end with the Cats holding a 13-10 advantage.

MSU would be forced to punt on its next possession, and the Cats would take advantage. Kentucky would cap off the seven-play, 80-yard scoring drive with two spectacular plays. First, Levis connected with JuTahn McClain on a sidearm pass thrown between two defenders, a play that McClain took for 31 yards. On the next play, Rodriguez ran left, broke two tackles, and found the end zone for another UK touchdown. Ruffolo added the PAT and the Cats had a 20-10 lead with 11:43 to play.

The Kentucky defense would force another MSU punt on the next possession, and things went from bad to worse for the Bulldogs on that punt. Backup punter George Georgopoulos shanked it off the side of his foot, resulting in a four-yard punt that gave Kentucky the ball at the MSU 45 with 10:14 to play in the game.

The Cats seemed to be ready to put the game away with a solid drive. In fact, UK went for it on fourth-and-eight from the MSU 43. But on the play, MSU’s Emmanuel Forbes cut off the route of Chauncey Magwood and intercepted Levis at the MSU 41. Forbes raced untouched to the end zone for a touchdown that got MSU back in the game with 8:33 to play. Biscardi added another point after, making it 20-17 Kentucky.