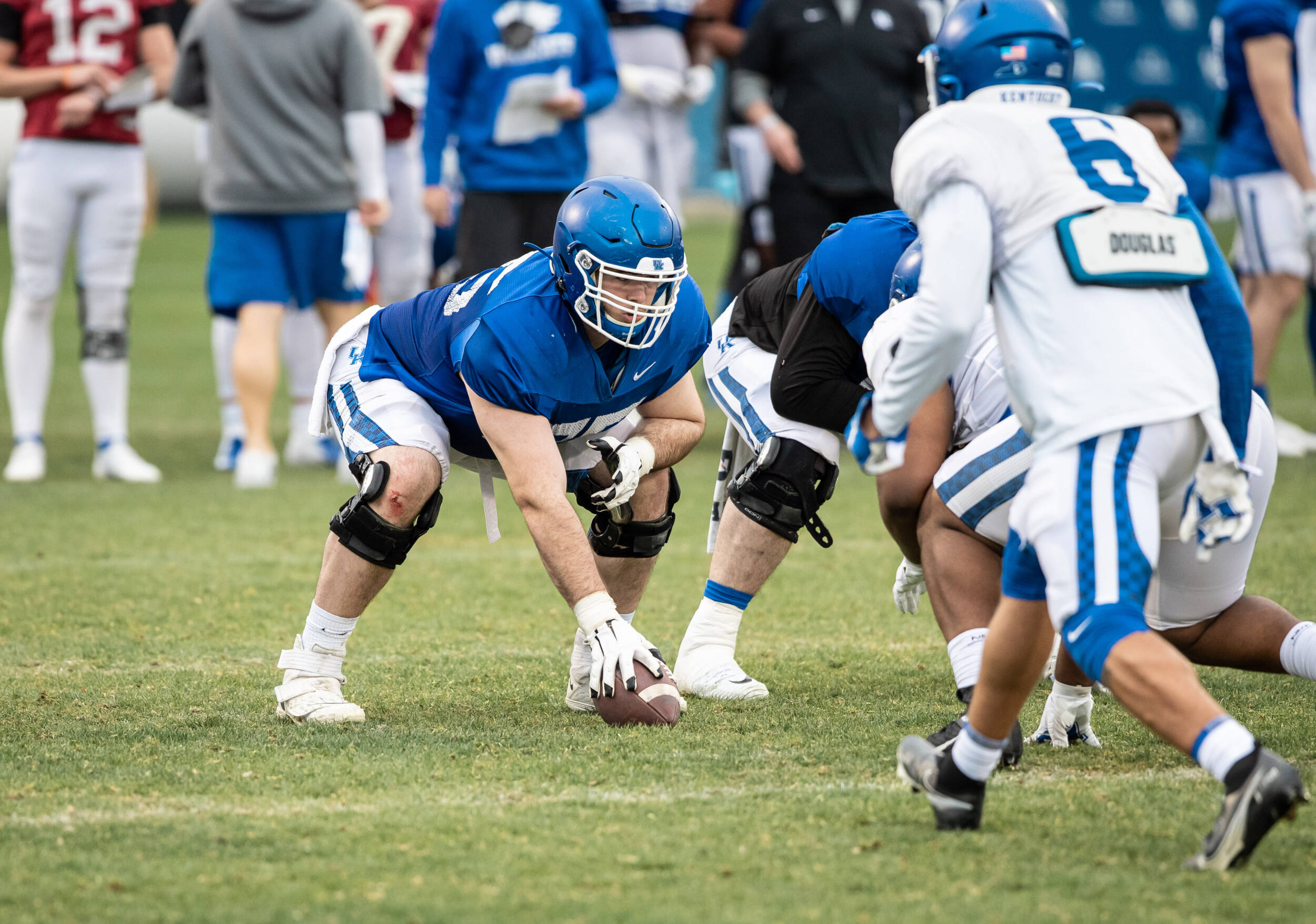 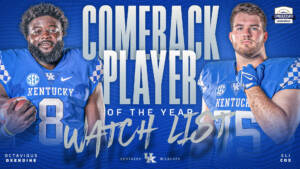 Junior center Eli Cox and junior defensive lineman Octavious Oxendine have been named to the watch list for the 2022 Comeback Player of the Year Award, it was announced today by the College Sports Communicators (formerly College Sports Information Directors of America [CoSIDA]) in association with The Associated Press (AP) and the Fiesta Bowl Organization.

Cox, a 6-foot-4, 298-pounder of Nicholasville, Kentucky, started at right guard in the first nine games of the 2021 season before suffering a hand injury vs. Tennessee.

The injury, which required surgery, was diagnosed as a torn flexor digitorum profundus (FDP) tendon in his left little finger, an injury that ended his season and prevented him from moving the finger or using it to grasp in any meaningful way.

“[Eli] puts a lot of force through his fingers. He is like a force of nature in terms of the amount he is generating through the flexor tendons of his fingers,” said Dr. Chase Kluemper, an orthopaedic surgeon at the UK HealthCare Hand Center. “There are two tendons that flex the finger and they curl the finger down into the palm. He ripped one of them off the bone, and it takes a significant amount of force to do that.”

The recovery process took approximately 14 weeks before he could use his hand again.

Prior to the injury, Cox was having a standout season even earning Midseason All-America honors from ESPN and AP for his play on the Big Blue Wall. He was named the Southeastern Conference Co-Offensive Line Player of the Week in helping UK pile up 330 rushing yards in the win over LSU.

He moved to center for the 2022 season to fill the void of departing center Luke Fortner to the NFL Draft. Cox is currently on the Outland Trophy Watch List for the nation’s top interior lineman.

Oxendine, a 6-1, 281-pound native of Radcliff, Kentucky, was having a breakout sophomore season, when midway through the fourth quarter against LSU, he tore and flipped the lateral meniscus in his right knee. Prior to the injury, he had three tackles, including the first two quarterback sacks of his career, good for 16 yards of loss, and was on track for an eye-popping performance.

The Wildcats went on to win 42-21 win and Oxendine was named the SEC co-Defensive Player of the Week for his efforts.

In six total games with three starting assignments in 2021, he had 15 tackles, including 3.5 tackles for loss, 2.0 sacks and a quarterback hurry.

After surgery and a rigorous rehabilitation process., Oxendine dropped more than 30 pounds in the offseason to improve his explosiveness. He has started in five of six games this season and has 14 tackles and two quarterback hurries.

About College Sports Communicators: College Sports Communicators (formerly College Sports Information Directors of America [CoSIDA]) is a 3,600+ member national organization, comprised of the athletic communications, media relations, digital and creative professionals throughout all levels of collegiate athletics in the United States and Canada.  Founded in 1957, the organization is the second oldest management association in intercollegiate athletics. The organization’s signature program is the Academic All-America program, honoring thousands of outstanding scholar-athletes annually.  To learn more, visit collegesportscommunicators.com