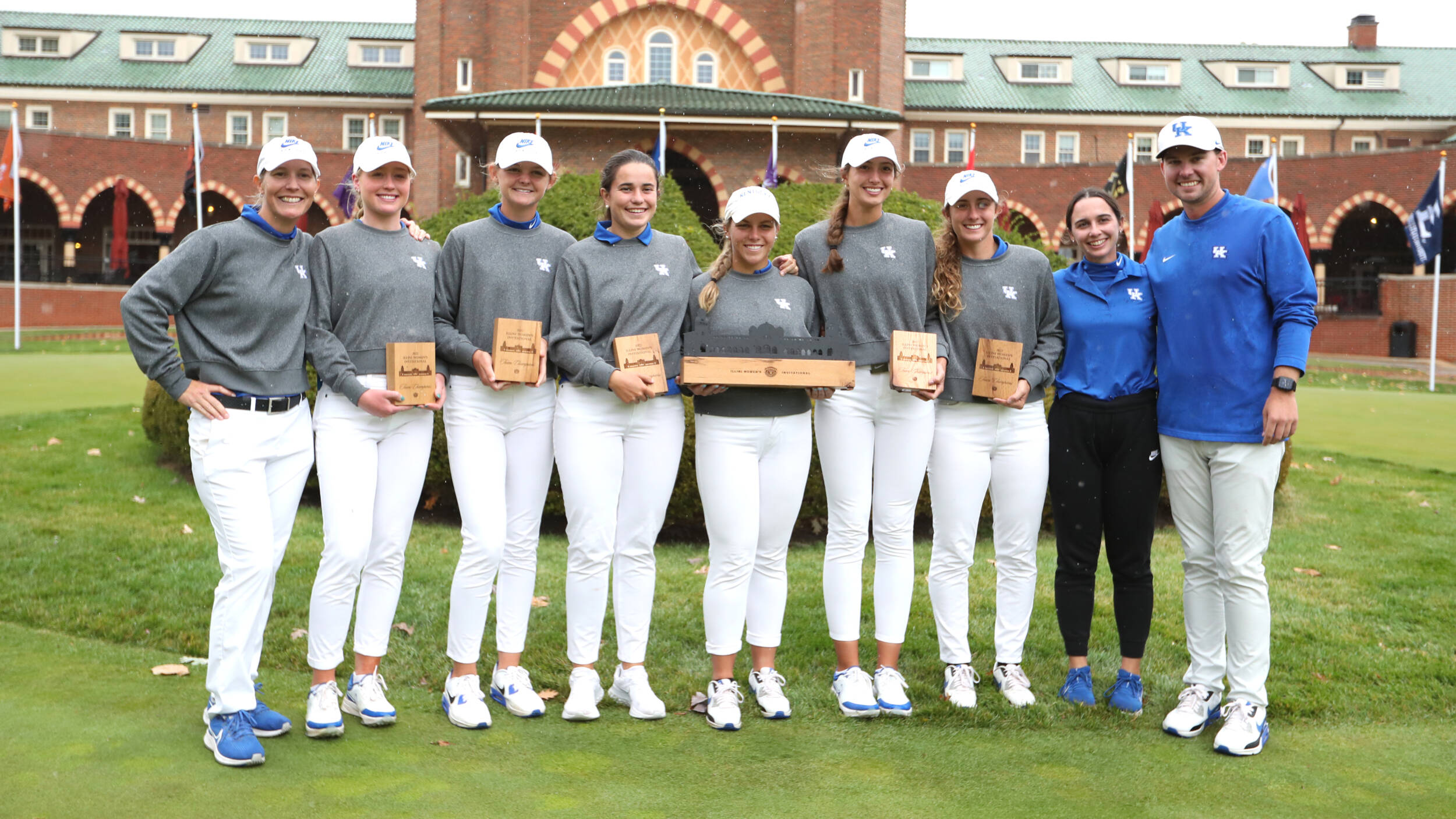 MEDINAH, Ill. – The Wildcats topped the leaderboard for the first time in two years, bringing home the Illini Women’s Invitational tournament title at the famous Medinah Country Club in Medinah, Illinois, Tuesday. The University of Kentucky women’s golf team strung together three of the best scores in program history – 275, 277 and 278 – to turn in a school record 34-under-par 830 for first place.

The Cats won by five strokes and broke the previous school record, which was set in Spring 2022, by three strokes.

It all began when the lineup recorded a school record 275 (-13) in the first round Monday, a round that had four of its five players shoot under par. The lineup didn’t stop there, however, because later that afternoon, the team recorded a 277 (-11) in the second round that marked the third-best team round in program history.

The Wildcats, who played 36 holes Monday, took their 24-under-par 552 into the final round Tuesday, just one stroke within reach of the leader.

With just 18 holes to play this morning, Kentucky began to work its way into a tie for the top spot on the leaderboard before eventually taking the solo lead through the tenth hole. The Wildcats finished the final round with a 10-under-par 278, tied for the fourth-best team total in program history. Meanwhile, all five players in the lineup produced a round under par in the final 18 holes for the first time this season – Laney Frye (-5), Jensen Castle (-3), María Villanueva Aperribay (-2), Ivy Shepherd (-2) and Marissa Wenzler (-2).

“It’s hard to even find words for how excited we are,” said head coach Golda Borst. “I haven’t quite gotten over it yet. We tried to be really calm throughout the day. The girls handled it tremendously all day, and whatever came their way, they just kept grinding to give themselves opportunities. They were ready to take on the challenge today. They played different. They played a lot harder. Some of the hole locations were tougher, but they were prepared and ready to go.”

Frye, a junior from Lexington, Kentucky, recorded her second straight score in the 60s Tuesday. She went 3-under through her first nine holes before recording her solo blemish of the round – a bogey on the par-4 No. 11. She rebounded with ease though, collecting five pars and three straight birdies to conclude the final round with a 5-under-par 67. It tied her career low, while it is the second instance she has recorded a 67 this season.

The Wildcat produced an impressive 10-under-par 206, a career best, while she tabbed her second finished inside the top 10 this season, finding a share of seventh place.

Castle, a senior from West Columbia, South Carolina, paced the lineup for the second straight tournament. She rallied a first-round 66, which is a career best, a second-round 70 and a third-round 69. Castle teed off on hole No. 1 Tuesday, recording a blemish-free front nine, and then some, going 2-under through her first 12 holes. She suffered a bogey on the par-4 No. 13, but bounced back with three birdies over her next four holes. The Cat played right into the wind and a forthcoming storm on her last hole of the final round, taking a six on the par-5 No. 18.

Marissa Wenzler recorded her third straight round under par, turning in a 1-under-par 71 Tuesday. Throughout the tournament, she recorded scores of 68, which was her career best, 69 and 71 to produce an 8-under-par 208. That is a monster career best for the senior, trumping her previous career best by eight strokes.

It is the first tournament total under par of her career – through 28 rounds in more than three seasons. Moreover, she has never recorded three straight rounds of par-or-better in her collegiate career.

The Dayton, Ohio, native concluded the tournament tied for 11th place, her best finish since tying for sixth place as a freshman in 2019-20.

María Villanueva Aperribay earned her second straight round under par Tuesday, recording a 1-under-par 71. It marked the second-best score of the senior’s season thus far, while it is the first instance she has recorded back-to-back rounds under par since last fall. The San Sebastián, Spain, native rallied a 1-under-par 215 for a share of 35th place, the second-best tournament total of her career.

Ivy Shepherd shined at the Illini Women’s Invitational, carding a 1-under-par 71 in the final round for an even-par 216 in the event. The graduate transfer tied for 40th place, which marks the best tournament total and finish of the season. Her first- and third-round scores of 1-under-par 71 were also season bests for the Peachtree City, Georgia, native.

The Wildcats will take a brief hiatus, before traveling to Chapel Hill, North Carolina, to compete in the Ruth’s Chris Tar Heel Invitational from Oct. 17-18.