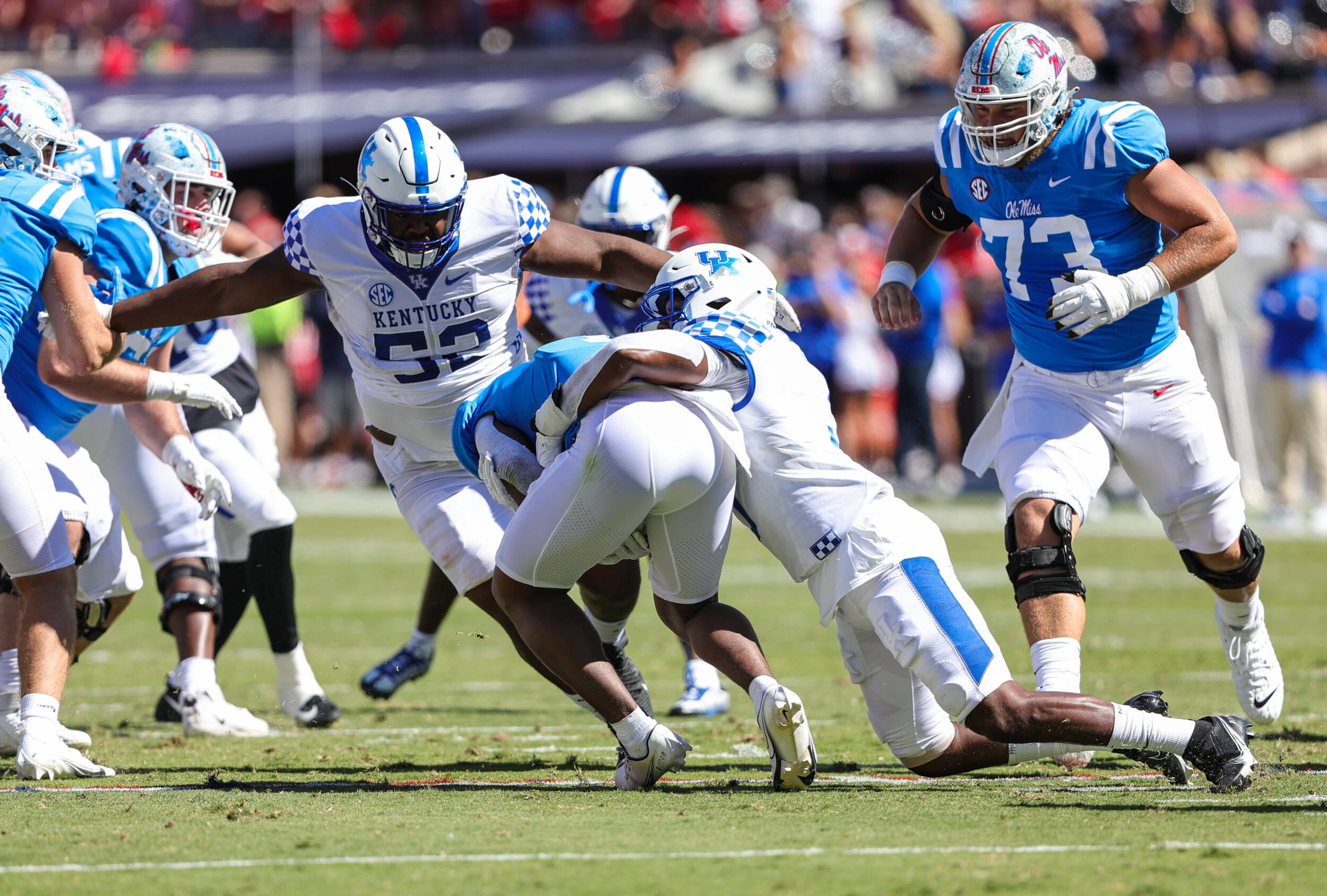 Opening Statement:
“Obviously a very difficult loss for our team, heartbreaking for our players. I thought they played extremely hard, extremely tough, extremely resilient. We didn’t play very clean, not
very precise in certain areas. You just lump it all together and say “well coach”, one of you guys is gonna ask me what’s wrong with your special teams? And I’m gonna say, “Well
look at the kickoff return.” The kick off return was exceptional. Then the snaps, getting one blocked, I thought was a low kick. Second one, bad snap. Missed the field goal, that one
I thought he hit good. We left points on the board, we left five points on the board right there. I also think a critical drive was when we got one first down, after getting it off our one
yard line, our inch line, we got one first down, and then go backwards to get safety. I thought that was a critical drive for us, and a mistake for us to give them the two points. I’m
extremely proud of our team with a lot of bad things going on, with ourselves making a lot of mistakes, and with them doing some good things, with the adversity that we faced.
Coming in at halftime, nobody flinching, everybody had a calmness about them, and it felt like we were going to go back out there in the second half and compete and come back to
win the football game. We certainly had our opportunities. With all that being said, to come down with two opportunities late in the game, in the red zone there, but we came away
with zero. That’s the difference in the game, thought it was a very close game, thought it was an even match going into it. That’s a good football team, coming into this environment,
at times we handled it very well, and other times we shot ourselves in the foot and made some mistakes. We have a very good team, I thought the way they handled all that, fought
back, believed, came back and competed to win the game. Had every opportunity to win it, just didn’t happen. We’ve got to go back to work, we have a lot to play for, and a lot we
know we can improve on.”

On how Will Levis played and how he was protected:
“I thought at times he played exceptionally well, protection was pretty good. With this structure, there were times he was maybe looking, holding the ball a little bit. You watch tape,
and it will be easier once you watch tape to say “hey you could have went with the ball here now or there”, but for him there’s a lot of moving pieces, a lot going on, he’s playing very
good football. You know, if we get our guys set, he throws a dime, wins the game, and everyone is saying “wow, pretty impressive”, to lead us back on two drives late in the game.
Not sure on the very last fumble, what happened on the protection.”

On finding something in Barion Brown:
“The big plays have been there for us all season, whether that be in special teams or whether it be in the pass game. We felt like we had a couple opportunities, he missed the one
there late on the last drive as well, just out of reach. He will continue to work on that, I expect him to make that play. I’ve seen him make it in practice, but even on the one that got
us down there, I feel like he could have got in. He was a little banged up too, he will be fine, but it was a rough game. A bunch of our guys got beat up, we are just sore, banged up,
and bruised. But, I thought he was gonna break away the kickoff return and that pass play. He’s a very talented young man, and he also plays extremely tough.”

On how were they hurting UK in the first half, and what adjustments were made:
“You know its gonna be a challenge, you know that going in. We’ve talked enough over the years about the tempo and getting used to it. They can only go so fast for so long, and our
guys get our feet in the ground a little bit. Settle down and start used to that pace, its almost impossible to practice that. We try, we do a variety of things to, but it’s still difficult early
on. Also to their credit, they blocked us, they made us miss, and hit some explosive runs, and got us on our heals a touch. Later in the game we settled in, and played complementary
football in the second half. The offense moved the ball, had some good possessions, defenses got some good stops. We flipped it, first half we felt like we were in bad field position
and they had good field position, second half it flipped. We ended up getting some good field position, defense getting a good stop and getting the ball back at the 50. I thought god
gave us some good momentum to get back in that game.“

On How he wants his team to respond to this game:
“We talked all week, I told them, the more precise team will win. We weren’t precise enough in certain situations. I love the way they didn’t even blink, they had full confidence that
we will come back and win this game. We just didn’t make the plays right at the end. We are fractions off. You’re one guy getting set from winning that game. They will learn from
it, that showed a lot because it was kinda the same situation in Florida, everything wasn’t going smooth, behind on the road. Okay, go in regroup, make our adjustments, come out
and execute and go put ourselves in a situation to win a game. You’re not always gonna do it, but you’re gonna darn sure work at it and give yourself an opportunity to go win.”

On the last two fumbles:
“On the first one he just made a good play. We could have been better at securing the ball. On the second one, I was trying to hit a double move and then was throwing it as he was
coming out of his break and just came off the ball inside. We just have to get the ball out earlier.”

On the frustrating loss:
“Coach Stoops always talks about teams beating themselves and the other team beating them and that’s what we felt like happened. They’re a really good football team and they
played really well but I feel like we became a better team towards the end there but we shot ourselves in the foot when it mattered. I needed to be a better game manager at the end
there especially on that touchdown pass when we were obviously trying to catch them off guard with that call. We have to make sure everyone is set and that’s my job. That’s on me.
That’s the game if we could have completed that. I’ll put it on me. Can’t turn the log like that whether it’s a strip or a fumble. Just have to be better.”

On what’s ahead for the team:
“I mean we still have everything we want on the table for us. We just have to take it one week, one game, one day at a time. I’m really proud of how our guys battles today. We have
a lot of guys banged up. We showed that we can win games like this. We should’ve won. We should’ve won games like this. Were obviously doing things right and we just have to keep
trusting our operations.”

KENTUCKY WR BARION BROWN
On his plays and the ones he missed:
“Being a little hard on myself, that I let down myself. That’s why we go to practice every day and work hard every day so I’m going to be looking forward to a great practice on Monday.”

On the coaching staff:
“We always work hard on the plays that we do and that we put in for me and also for my other fellows. Knowing that we have plays for everybody is cool.”

On the message to other captains:
“Will is a strong guy. I just tell him to keep going. He doesn’t hang his head. He will be alright.”

On the defensive players:
“I told them in the locker room, I said you stepped in fairly well and I’m proud of him. The reserves work really hard. They are always ready for the opportunity and they showed up
today.”