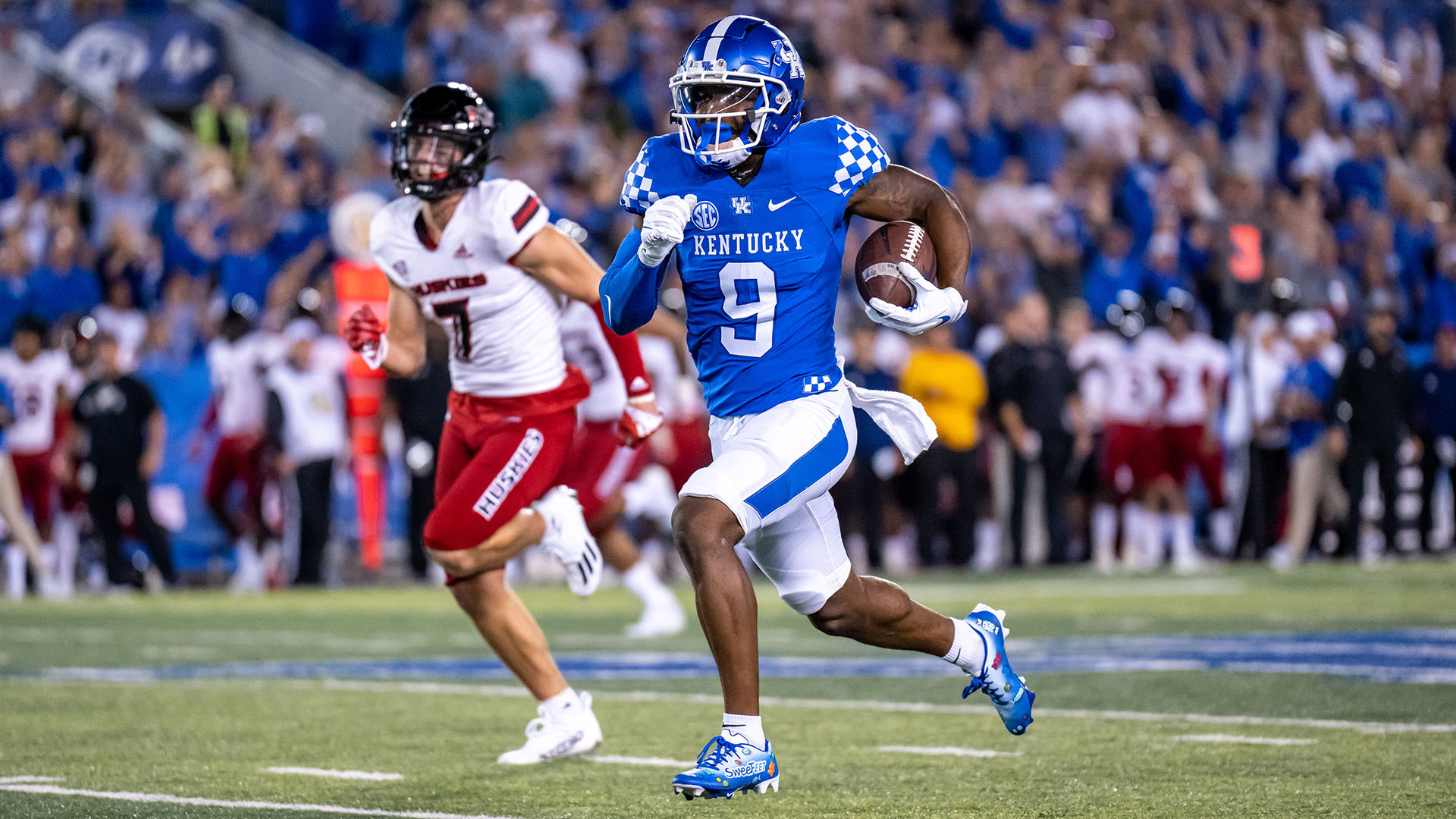 LEXINGTON, Ky. – Senior quarterback Will Levis connected on 18 of his 26 passes for 303 yards and four touchdowns as No. 8 Kentucky held off a tough Northern Illinois squad 31-23 on Saturday night at Kroger Field.

Kavosiey Smoke rushed 12 times for 85 yards in the game as the Cats rushed for 103 yards as a team.

Defensively, Jacquez Jones led the Cats with 12 tackles, including four of the solo variety. DeAndre Square and Jordan Wright each had six tackles for UK in the win.

Northern Illinois took the opening kickoff and wasted little time in getting the scoring underway. The Huskies used the ground game to move deep into Kentucky territory. A 20-yard rush by Antario Brown got the Huskies inside the UK five yard line. Then, on third-and-goal, quarterback Ethan Hampton connected with Tristen Tewes on a two-yard touchdown pass. John Richardson added the PAT and NIU led 7-0 with 8:53 to play in the first quarter.

Kentucky would answer with a scoring drive of its own. The Cats started slowly, having to go for it on fourth down early in the drive, but found their rhythm later in the possession. Unlike NIU, the Cats went the air, riding the passing of Levis, who hit on six of his nine passes on the drive for 55 yards. The drive culminated with a 15-yard touchdown to freshman Brown. Matt Ruffolo added the PAT and the game was tied 7-7 with 48 seconds left in the first quarter. That would be the score as the period came to an end.

Northern Illinois would drive near midfield with its next drive but, on fourth down, used a quick kick from Hampton to end the drive. The punt went into the end zone and the Cats took over at their own 20 with 13:01 left in the first half. Kentucky did very little with the next drive and punted the ball back to Northern Illinois with 8:50 to play in the half.

NIU punted on its next possession as well, with punter Tom Foley drilling a 61 yarder and pinning the Cats at their own two yard line with 6:47 to play in the half.

It took just one play for the Cats to get out of that hole. On first down, Smoke broke through the left side for a 27-yard run, getting the Cats out of the shadow of their own goalpost and into manageable territory. Later in the drive, Levis hit a streaking Robinson, who outraced the defense on his way to the end zone. It was a 69-yard touchdown and, when Ruffolo added the PAT, the Cats led 14-7 with 5:08 to play in the half.

Late in the half, NIU had the ball near midfield and was forced to punt. On the ensuing UK drive, Smoke fumbled and NIU recovered at the Kentucky 34 with 42 seconds left in the half. The Huskies got a 20-yard completion from Hampton to Cole Tucker on first down, then another completion, this one from Hampton to Fabian McCray, getting NIU to the UK five yard line.

UK appeared to be poised for a big defensive stop. But on third and goal, NIU ran a reverse to Shemar Thornton, who pulled up and connected with Tewes on a three-yard scoring pass with just six seconds left in the half. Richardson added the point after and the game was tied at 14-14. That would be the halftime score.

Kentucky had the first possession of the second half and, on the second play from scrimmage, Levis appeared to be intercepted. However, the NIU defender could not come up with the catch, giving new life to the UK drive. On the next play, Levis made the Huskies pay, connecting with Brown across the middle and watching the freshman do the rest, as he took it to the house for a 70-yard touchdown. Ruffolo added the PAT and the Cats grabbed a 21-14 lead just 58 seconds into the third quarter.

The next three drives, two by NIU and one by UK, all ended with punts. Kentucky took over at its own 33 with 7:16 left in the third. The Cats would take the ball into NIU territory before the drive stalled. UK would cap the drive with a 49-yard field goal from Ruffolo to take a 24-14 lead with 3:04 remaining in the third period. The third quarter would come to an end with the Cats holding that 10-point advantage.

After another NIU punt, the Kentucky offense again put points on the board. The Cats were able to march 78 yards in 11 plays, culminating when Levis connected with Robinson for a second touchdown pass, this one covering 40 yards. Ruffolo made another point after and UK led 31-14 with 8:46 to play.

NIU would add a 38-yard Thornton field goal to make it 31-17 with 5:26 to play. After UK was forced to punt, the Huskies struck quickly, as Hampton connected with Kacper Rutkiewicz on a 63-yard gain, getting the ball to the UK five. The UK defense appeared to have stopped the Huskies, but a defensive holding call on fourth down gave NIU a first down, with the ball at the two. On the next play, Justin Lynch ran left and scored, cutting the UK lead to 31-23. The Huskies two-point conversion was broken up by Zion Childress and the Cats led by eight with 2:47 to play.

After an unsuccessful onside kick by NIU, Kentucky was able to run out the clock and clinch the victory.

Kentucky returns to action next week, visiting Oxford, Mississippi, to face Ole Miss. Kickoff is set for noon ET and the game can be seen on ESPN.