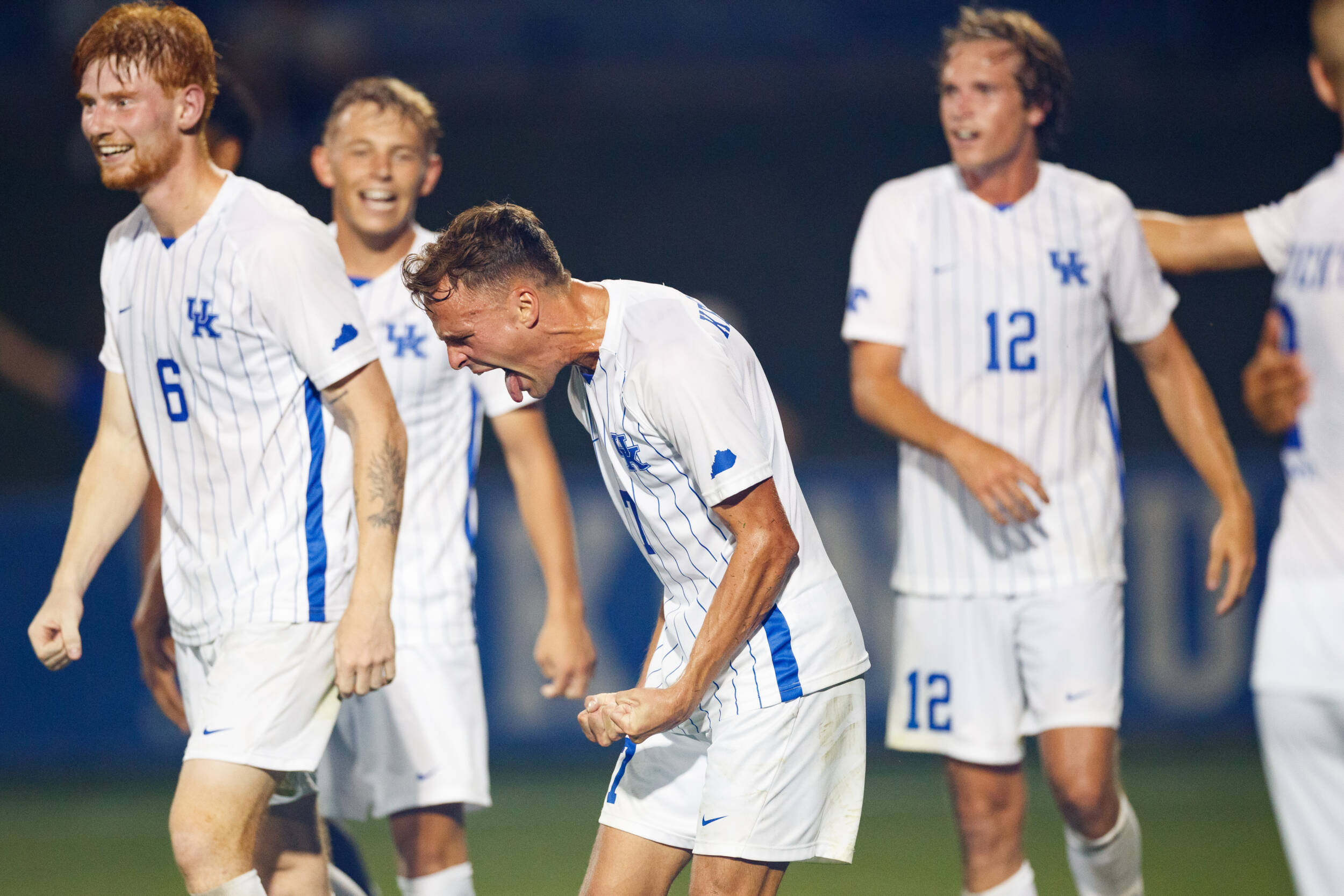 LEXINGTON, Ky. – Eythor Bjorgolfsson, Nick Gutmann and Casper Grening scored as the No. 5 Kentucky Men’s Soccer (4-0-0) came back from a goal down to win 3-2 against in-state rival No. 10 Louisville (3-1-0) at the Wendell & Vickie Bell Soccer Complex on Tuesday.

An electric crowd of 2,004 members of Big Blue Nation went wild as the Wildcats equalized in quick succession and then quickly took the lead in the second half before Grening scored what proved to be the winner in the 74th minute.

The Wildcats defeated Louisville for the third season in a row, and the fourth time in a row at home in the series that rotates between on-campus venues each year. The Wildcats improved to 15-8-5 all-time against the Cardinals.

Louisville took the lead on an own goal in the 10th minute, but the Wildcats were not deterred and leveled proceedings shortly thereafter. Bjorgolfsson used height to his advantage to head a Grening cross into the net for his second goal of the season.

“The grit and the resiliency from our guys to claw themselves back in to tie the game going into halftime, I thought was great for our guys,” said assistant coach Ryan Zinkhan. “They really executed the game plan well.”

Entering the second half of the match tied 1-1, the Wildcats took the lead just after the restart. Gutmann, scored his second goal of the season and first since the season opener, thanks to an assist by Enzo Mauriz. The junior’s through ball played Gutmann in on goal where he fired a right-footed ball into the back of the net. Mauriz tallied his first assist of 2022.

Grening added margin to the Wildcats’ lead in the 73rd minute. After firing four shots throughout the contest, one of his three on goal gave Kentucky a 3-1 lead. Grening broke away in transition, dribbled into the box and lofted the ball over the goalkeeper and a sliding, trailing defender, Grening scored his second goal in two games.

Louisville kept the result in doubt with a 80th-minute goal, but UK controlled possession in the last few minutes of the game and the defense, which conceded their first two goals of the season during the game, was resolute when they were called upon in what could have been nervous closing moments.

The Wildcats travel to Tulsa, Okla., for the first road test of the season. Kentucky will face the No. 20 Golden Hurricanes in a non-conference match on Sunday for an 8 p.m. ET matchup.