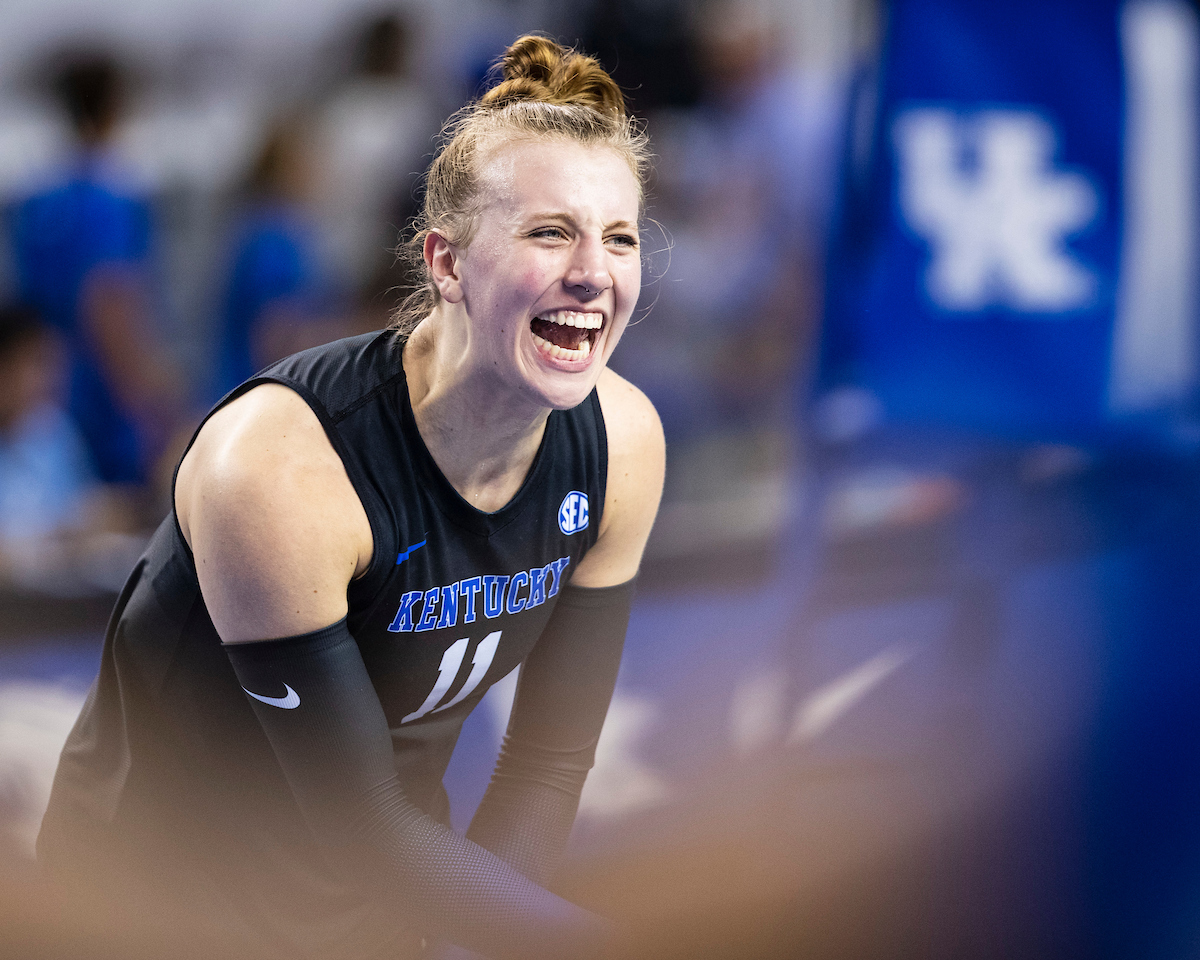 Goetzinger and Tealer Block No. 25 Southern Cal as UK Sweeps

OMAHA, Neb. – Elise Goetzinger and Azhani Tealer each had four blocks as the No. 16 Kentucky Volleyball team overpowered No. 25 Southern California in a 3-0 (25-17, 25-16, 25-14) sweep to secure the 2022 Hilton Omaha Bluejay Invitational championship thanks to an undefeated weekend.

Reagan Rutherford had another sensational match with 14 kills on 27 swings and hit .444 for the match. Rutherford was named the Bluejay Invitational tournament MVP, with sophomore setter Emma Grome and junior middle blocker Elise Goetzinger named to the all-tournament team.

Goetzinger was outstanding Saturday night, logging 11 kills and no errors on 14 swings with a whopping .786 hitting percentage to couple with her four blocks.

In the eight years of the rotating event, Kentucky had never gone 3-0 against Northern Iowa, Creighton and Southern Cal until this year, the eighth and final iteration of the event. UK won the tournament for the first time, as well.

Kentucky will play host to No. 6 Wisconsin on Friday night, Sept. 9 at 6 p.m. ET inside Memorial Coliseum in its next match. The match has been moved up an hour to 6 p.m. ET and will be shown live on ESPNU with Eric Frede and Holly McPeak on the call from Lexington.

Reagan Rutherford picked up right where she left off in the morning with a thunderous kill to start the Kentucky offense assisted by the power from Adanna Rollins on the other side of the net. Rutherford then went on a 3-0 service run punctuated by an overpass kill from Azhani Tealer to make it a 15-12 Kentucky lead at the media timeout. The Wildcats then extended their lead to 17-13 and USC was forced into its first timeout trailing by a set-high four points. Back-to-back blocks by Azhani Tealer and Emma Grome ballooned the Kentucky lead to seven at 21-14 and USC fell into its second timeout. An Elise Goetzinger kill ended the set with UK taking the opener 25-17 thanks to Adanna Rollins’ team-high five kills and hitting .464 as a team, more than .100 higher than the Trojans. Emma Grome had 12 assists in the match through the opening frame and Tealer had two blocks to lead all players in the match.

Elise Goetzinger capitalized on terrific passing in the midway point of the second set to win back-to-back points and give the Wildcats a 13-10 lead thanks to a kill in transition and a stuff block. Kentucky faced tough serving pressure the entire first part of the set but was able to weather the storm and turned a 10-9 deficit into a 14-10 lead after the timeout as Rutherford pounded her eighth kill of the match to the floor in transition. Kentucky’s lead grew to six points at 18-12 and the Trojans called their final timeout after an Elise Goetzinger kill, her eighth of the match to co-lead the Wildcats to that point in the match with Rutherford. Goetzinger then ended the set with a stuff block, her third of the set, to give the Wildcats a 2-0 lead thanks to a 25-16 second frame win. UK hit .548 in the set while holding the Trojans to just .257 offensively and registering five blocks to the Trojans zero.

Kentucky took a 15-8 lead at the media timeout of the third set after Emma Grome pelted the Trojans with her first service ace of the evening, one of six in the match for the Wildcats to that point. Rutherford’s 13th kill of the match increased the lead to 19-10 and USC called its final timeout of the set down by nine. The Wildcats rolled to the finish with a service error ending the match and UK taking the three-set sweep over the Trojans in Omaha.