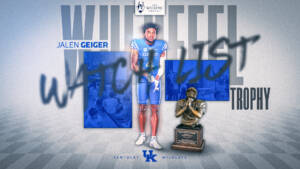 Junior defensive back Jalen Geiger has been named to the watch list for the Wuerffel Trophy, College Football’s Premier Award for Community Service, it was announced Thursday.

Geiger is one of 115 players from college football’s Football Bowl Subdivision (FBS) on the watch list for the trophy, which is named after Danny Wuerffel, the 1996 Heisman Trophy-winning quarterback from the University of Florida. The Wuerffel Trophy is presented each February in Fort Walton Beach, Florida, and honors college football players who serve others, celebrate their positive impact on society and inspire greater service in the world.

Geiger, a product of Columbia, South Carolina, grew up in a military family as his dad Tony was a Chief Warrant Officer (CW3) in the United States Army for 21 years with five combat deployments, while his mom Ramona retired as a First Sergeant (E-8) after 25 years of service with three combat deployments in the Army. Due to his parents’ military service, Jalen attended six different schools from kindergarten through 12th grade. He knows a thing or two about what it feels like to be the new kid in class and how hard it can be to make new friends. Because of his background, Jalen has a passion for helping elementary school-age kids not feel alone and he uses his platform as a football player to help kids in need. In 2021, he found a mentorship opportunity at Liberty Elementary in Lexington. He visited the school on several occasions, playing with the kids and talking to them about learning and trusting their teachers. He will continue that work in 2022 with plans to talk more to the kids about anti-bullying and being kind to one another.

“Everyone that has met Jalen is so very impressed with everything about him,” Liberty Elementary Child Guidance Specialist Bethany Dewsnap said. “He takes his role as a mentor seriously and encourages our students to be great. He talks to them about the importance of learning and taking advantage of the opportunities they are given, even when they have to work for it. When asked by the principal about working hard for Coach Stoops, he said he works hard because Coach Stoops believes in him and knows what he is capable of accomplishing. He related it back to trusting your teachers and working hard for them because they want you to be your best. Jalen is quiet in nature, but what he says really resonates with my students.”

Other community service events Jalen has volunteered for are below:

On the field, the 6-foot-1, 197-pounder, played in all 13 games last season with two starting assignments. He totaled 18 tackles, a tackle for loss, a quarterback hurry, a pass breakup and an interception for a touchdown.

The formal announcement of the 2022 recipient is scheduled to be made on December 8, and the presentation of the 2022 Wuerffel Trophy will occur on February 24, 2023.