EUGENE, Ore. — Kentucky track and field alumnae Sydney McLaughlin and Abby Steiner win gold at World Athletics Championships in the 400-Meter hurdles and 4x100m relay, respectively, with McLaughlin’s win being a world record over the weekend.

McLaughlin smashed her own 400m hurdles world record by nearly a second for her first World Athletics gold, clocking 50.68 as the first and only woman to run under 51 seconds in the event.

McLaughlin now has four of the five fastest times in world history in the 400m hurdles.

Steiner earned her first World Athletics title as the second leg of the Team USA 4x100m, which won the race in 41.14 and upset the Jamaicans with the fifth fastest time in world history and fastest on American soil. Steiner ran a 9.86 split, the fastest among Team USA athletes and tied for third fastest in the race.

That 4x100m marked Steiner’s 56th race over seven months, including silver at the NCAA Championships in the 4x100m with UKTF.

All three UKTF-affiliated athletes in the 100m hurdles qualified for semifinals on Saturday, with Jasmine Camacho-Quinn running the top time of the three (12.52Q), followed by Keni Harrison with the fifth fastest time of the heats (12.60Q) and Devynne Charlton in seventh (12.69Q).

The three Tokyo 2020 finalists in the event, in which Camacho-Quinn won gold and Harrison silver, run in the semifinal at 8:10 p.m. ET and the final at 10 p.m. on Sunday, the final day of competition.

Day 7
Steiner finished fifth in the 200-meter dash in her first World Athletics Championships on Thursday evening at Hayward Field.

Steiner earned fifth with a time of 22.26, running her final individual event of her 55-race season.

The reigning Olympic gold medalist, reigning world champion and several other Olympic and world medalists joined Steiner in the talent-packed final that was ultimately won by Jamaica’s Shericka Jackson in near world record time.

Steiner remains the second fastest runner in the world this season with her 21.77 to win the United States 200m title in June.

Three years ago, 52.17 would have been a world record, and McLaughlin showed signs of easing up towards the end of the race.

Day 5
Steiner qualified for the 200-meter final while McLaughlin punched her ticket to 400m hurdles semifinals at World Athletics Championships on Tuesday evening.

The reigning U.S. 200m champion ran 22.15 in semifinals and placed second in her heat to receive an automatic bid to the final in her first World Championships.

Steiner currently has the second fastest 200m time in the world this year (21.77) behind Jamaica’s Shericka Jackson (21.55). 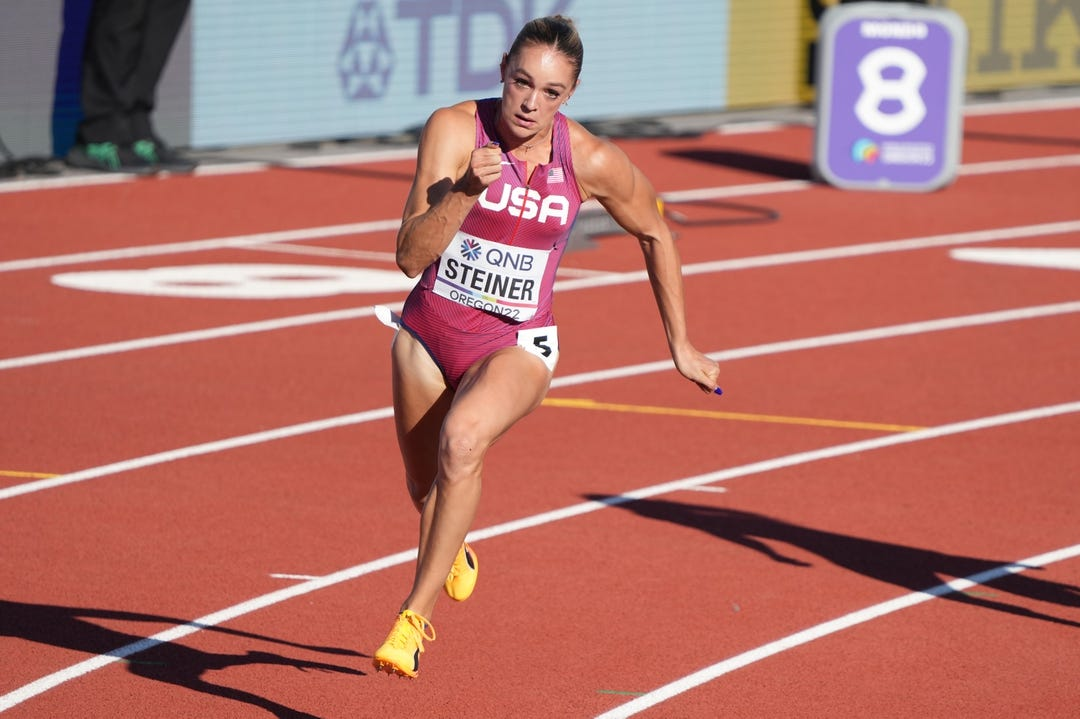