The Boz is Back: Bosma to Return for 2023 Season

LEXINGTON, Ky. – Senior left-handed pitcher Tyler Bosma announced on Thursday he intends to return to Kentucky for his final season of collegiate eligibility for the 2023 season. His presence gives the Wildcats an experienced, frontline starter for its weekend pitching rotation.

Bosma, from Holland, Michigan, was electric in his Southeastern Conference Tournament debut, pitching a no-hitter versus high-powered LSU into the seventh. In that outing he came the first UK pitcher since Cole Stupp in 2021 to record 10 or more strikeouts.

He carried the momentum over to the famed Cape Cod summer baseball league, posting a 1.68 earned run average in 16 innings over four starts. He did not allow a run over his final seven innings. 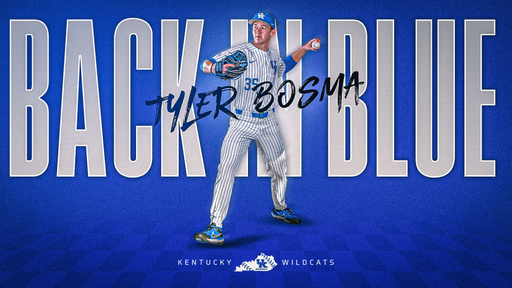 Bosma was off to a terrific start in 2022, his first season at UK after transferring from Miami (Ohio), before nagging shoulder soreness derailed his effectiveness before returning with a vengeance at the end of the season. He had a 4.79 ERA with 43 strikeouts in 41 innings over 11 games.

UK now returns Bosma, Magdiel Cotto, Ryan Hagenow, Austin Strickland and potentially Zack Lee with starting experience in the SEC. Senior Darren Williams, who started a pair of games, is expected back from injury at some point during the 2023 season as well.