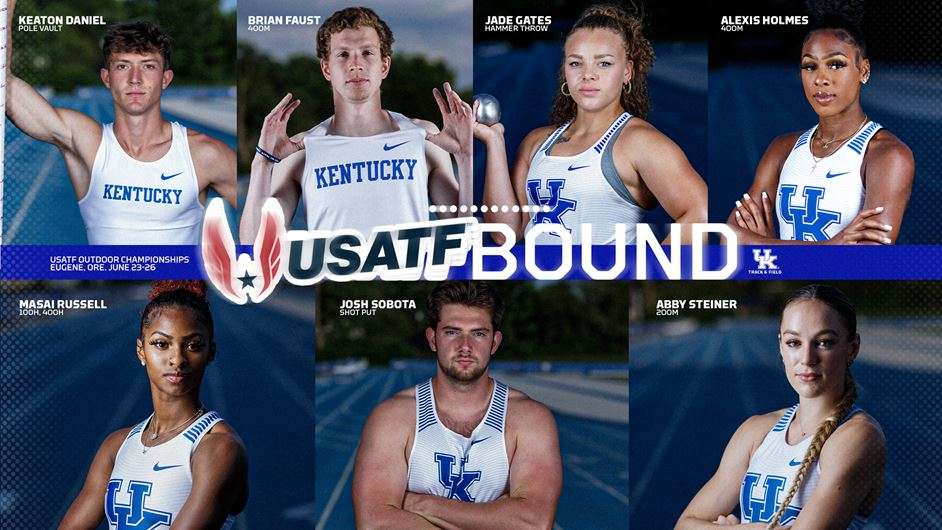 UKTF signees Jordan Anthony, Brandon Miller and Victoria Perrow will be competing in the USATF U20 Outdoor National Championships, also in Eugene, from Thursday through Saturday.

USATF Outdoor National Championships Meet Information
The meet begins on Thursday at 7:50 p.m. ET for the Wildcats with the 400m hurdles first round and concludes Sunday with the men’s 110m hurdles final at 5:54 p.m.

USATF U20 Outdoor National Championships Meet Information
The meet begins Thursday with the decathlon and heptathlon events, but UKTF signees Miller and Anthony will take the track for the first time on Friday at 5:12 p.m. ET for the 100m first round. The men’s 100m final is at 7:37 p.m. ET.

Javianne Oliver, also an Olympic silver medalist, will be competing in her best event, the 100m. She earned silver in the 4x100m relay for Team USA in Tokyo.

Sha’keela Saunders, Olivia Gruver and Dezerea Bryant all earned NCAA medals during their time at UK. Saunders was a three-time NCAA runner-up in long jump and holds UK’s indoor and outdoor program records. At the U.S. Olympic Team Trials in 2021, Saunders finished fourth with a 22-foot jump.

Gruver holds UK’s indoor and outdoor pole vault school records, in which she became NCAA champion in 2017 and 2018 before transferring to University of Washington. Dezerea Bryant will compete in both the 100m and 200m this week. She finished ninth in the 100m at last year’s U.S. Olympic Trials and sixth in the 200m. She currently sits second all-time for UK in the 60m, 100m and 200m, second only to Abby Steiner.