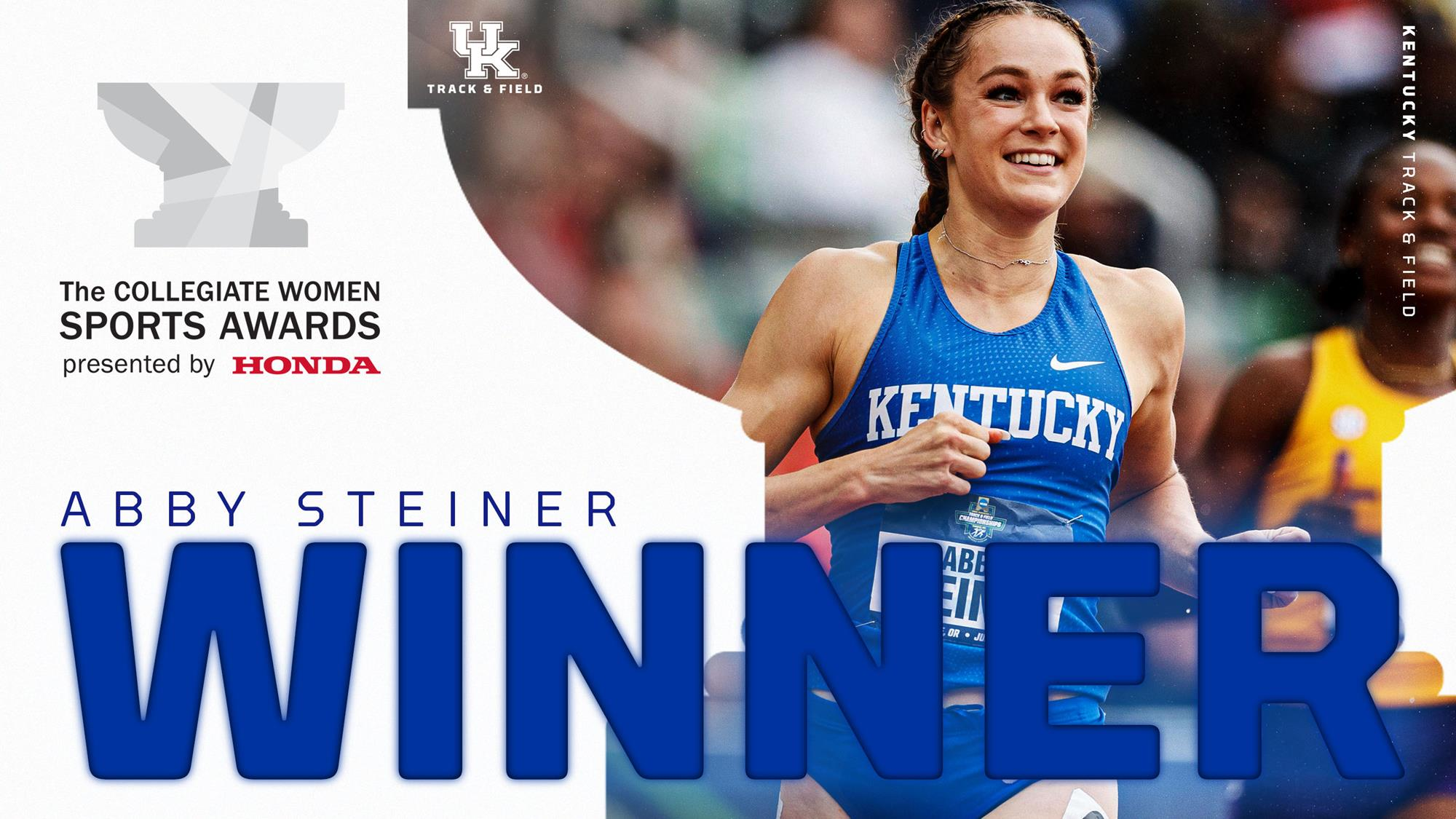 “It’s a great honor to be selected as the track and field recipient of this award and to be nominated among so many other talented and strong women. A special thank you to my coaches, my parents, my teammates, and all the other people I have met along the way to get me to this point. It has been an honor to run track at Kentucky and be able to represent the Wildcats. Go Cats and thank you,” Steiner said.

Steiner is coming off NCAA titles in the 200-meter dash and 4x400m relay last weekend, after winning the indoor 200m at the NCAA Indoor Championships in March. She now has the collegiate record in the 200m (21.80), which is the eighth fastest in American history and 21st fastest in world history. She also ran the third leg of the winning 4x400m relay, taking the Wildcats from fourth to first with a blazing 48.92 split to show off her #SteinerSpeed.

The Honda Sport Award has been presented annually by the CWSA for the past 46 years to the top women athletes in 12 NCAA-sanctioned sports and signifies “the best of the best in collegiate athletics”. The winner of the sport award becomes a finalist for the Collegiate Woman Athlete of the Year and the prestigious 2022 Honda Cup which will be presented during the live telecast of the Collegiate Women Sports Awards Presented by Honda on CBS Sports Network on June 27, at 9 p.m. ET.

“We are so proud of Abby, who is so deserving of this honor bestowed by the Collegiate Women Sports Awards,” Kentucky Track and Field Head Coach Lonnie Greene said. “Abby exemplifies ‘The best of the best in college athletics’ because of her commitment to greatness, not just as a world-class athlete, but also as a top-class person and leader. Abby is a record breaker, a role model and a leader. For her to be the first Kentucky Wildcat to win this prestigious award for the sport of track and field is even more of a testament to what a special student-athlete and person she is. Kudos to Abby and her amazing family, as well as Coach Tim Hall and our staff here.”

“The Honda Sport Award is one of the most prestigious honors in college athletics so we are unbelievably proud of Abby Steiner for earning this accolade,” Kentucky Director of Athletics Mitch Barnhart said. “Congratulations go out to Abby, her family, coaches and those who support her. Thank you to the CWSA and the hundreds of voters who selected Abby for this honor. She is a tremendous competitor, hard-worker and role model. We are lucky to be able to work with Abby. She has an even brighter future and we look forward to seeing what she has in store.”

The senior from Dublin, Ohio is now a 15-time All-American featuring 11 first-team honors and a four-time SEC champion.