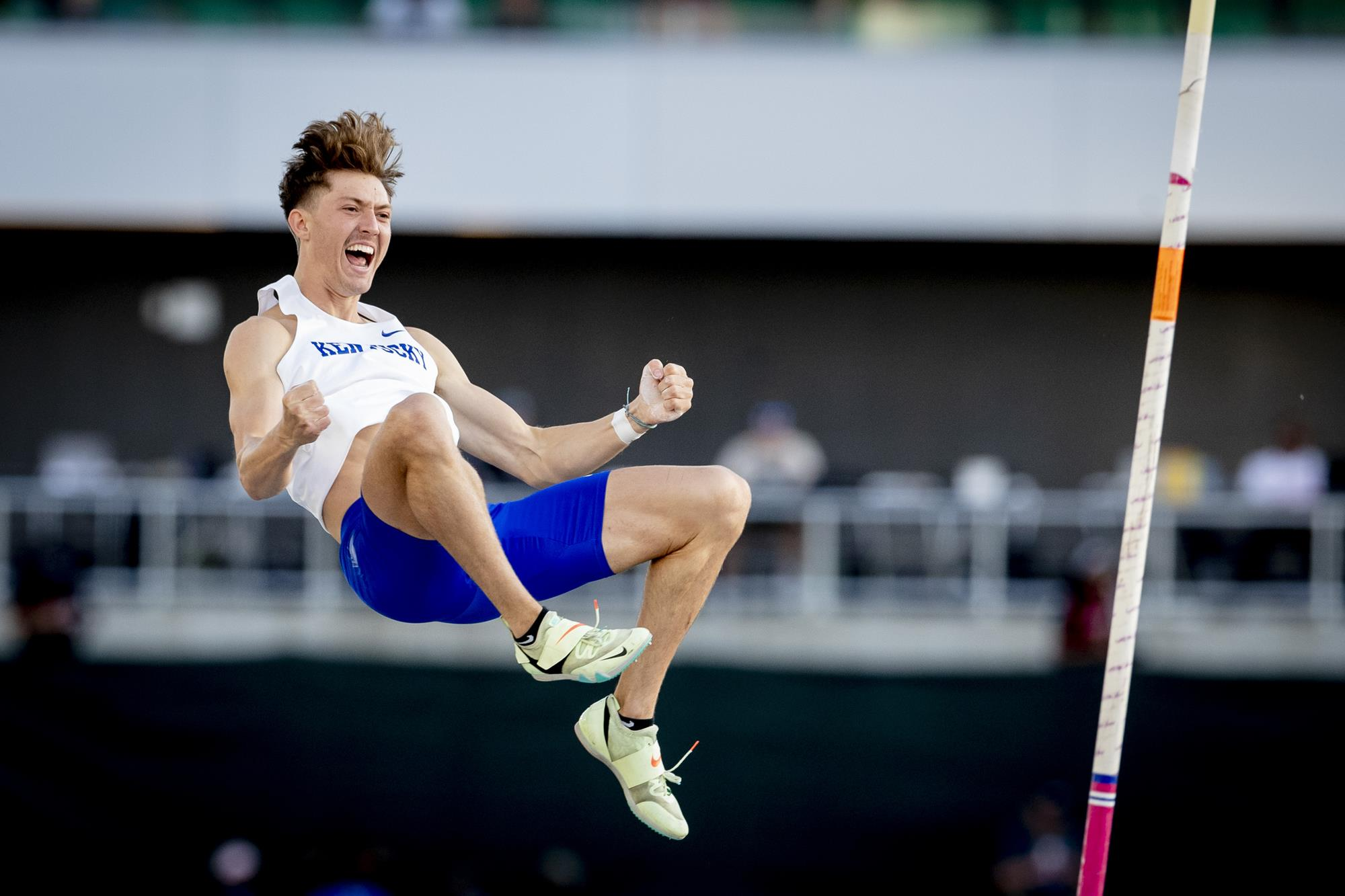 by Jake Most
Share
EUGENE, Ore. – Sophomore pole vaulter Keaton Daniel scored six points for the Kentucky track and field team, earning a bronze medal to back up the silver he claimed last season, on the first night of the 2022 NCAA Outdoor Championships on Wednesday in Hayward Field.

Daniel, the two-time defending Southeastern Conference outdoor champion, cleared a season best 18’6.5″/5.65 meters after making each of his previous three attempts of the series. He was unable to get over the bar at 18’8.25″/5.70m on one attempt and then passed up to 18’10.25″/5.75m once third place was assured but missed on each of those attempts.

“It’s a good feeling,” Daniel said. “I definitely know I have more in me though. I went through clean, it was a good competition, and I came out with the bronze. All good.

“It was a long competition. We were vaulting for about three hours, 30 minutes so I had to be strategic on when I was warming up and staying loose. Ultimately, we handled it well. Ended up clean throughout the competition and just got out a little bit too early.”

UK’s men’s 4x100m relay of Lance Lang, Dwight St. Hillaire, Jacob Smith, and Rodney Heath had the 18th fastest time of the semifinals (39.23) and did not advance to Friday’s final.

Nineteen Wildcats qualified for the NCAA finals site by finishing in the top 12 of their respective individual and relay events at NCAA East Prelims in Bloomington, Indiana, over Memorial Day weekend.

Meet Information
The UK women’s team goes into the meet No. 7 on USTFCCCA’s National Track and Field Ratings Index.

Start lists and results will be at flashresults.ncaa.com.
Below is a list of Wildcats competing and what events they will be competing in.
Women:
Men
Wildcats to Watch
Women’s team
UK’s women’x 4x400m relay of Karimah Davis, Megan Moss, Dajour Miles and Alexis Holmes, which set the collegiate record (3:21.93) en route to the Southeastern Conference title last month, earned the top qualifying spot out of East Prelims.
Steiner also qualified in two individual events, running the top time of the 200m quarterfinal (22.01w, +2.1) in Bloomington. Steiner ran the second fastest time of 100m quarterfinals (11.04).
The 4x100m featuring Steiner, Shadajah Ballard, Masai Russell and Davis was second fastest time of the first round (42.63).
Russell qualified for NCAA Outdoors in the 100m hurdles and 400m hurdles for the second year in a row with her 12.84 (-1.5) 100m hurdles at NCAA East Prelims and a personal best in the 400m hurdles (55.36).

Holmes is in the midst of an impressive streak of sub-52-second times, and qualified for the NCAA 400m outdoors for the first time in her career.

Perri Bockrath ran the school record in the 3k steeplechase of 9:52.00 at East Prelims to make the NCAA Championships for the first time in her career. Freshman Sophie Galloway is an NCAA qualfier in the triple jump.

Davis earned a qualification spot in the 200m and Moss made the individual 400m field. Jade Gates also made NCAAs for the first time in the hammer throw.

The men’s team tied for 15th place – UK’s best showing in seven years – at the 2021 NCAA Championships with 17 points. The UK men’s team’s best ever NCAA Outdoor finish was seventh in 1996 on 22 points.
Follow Kentucky Track and Field and Cross Country on Facebook, Instagram, Twitter and at UKathletics.com.