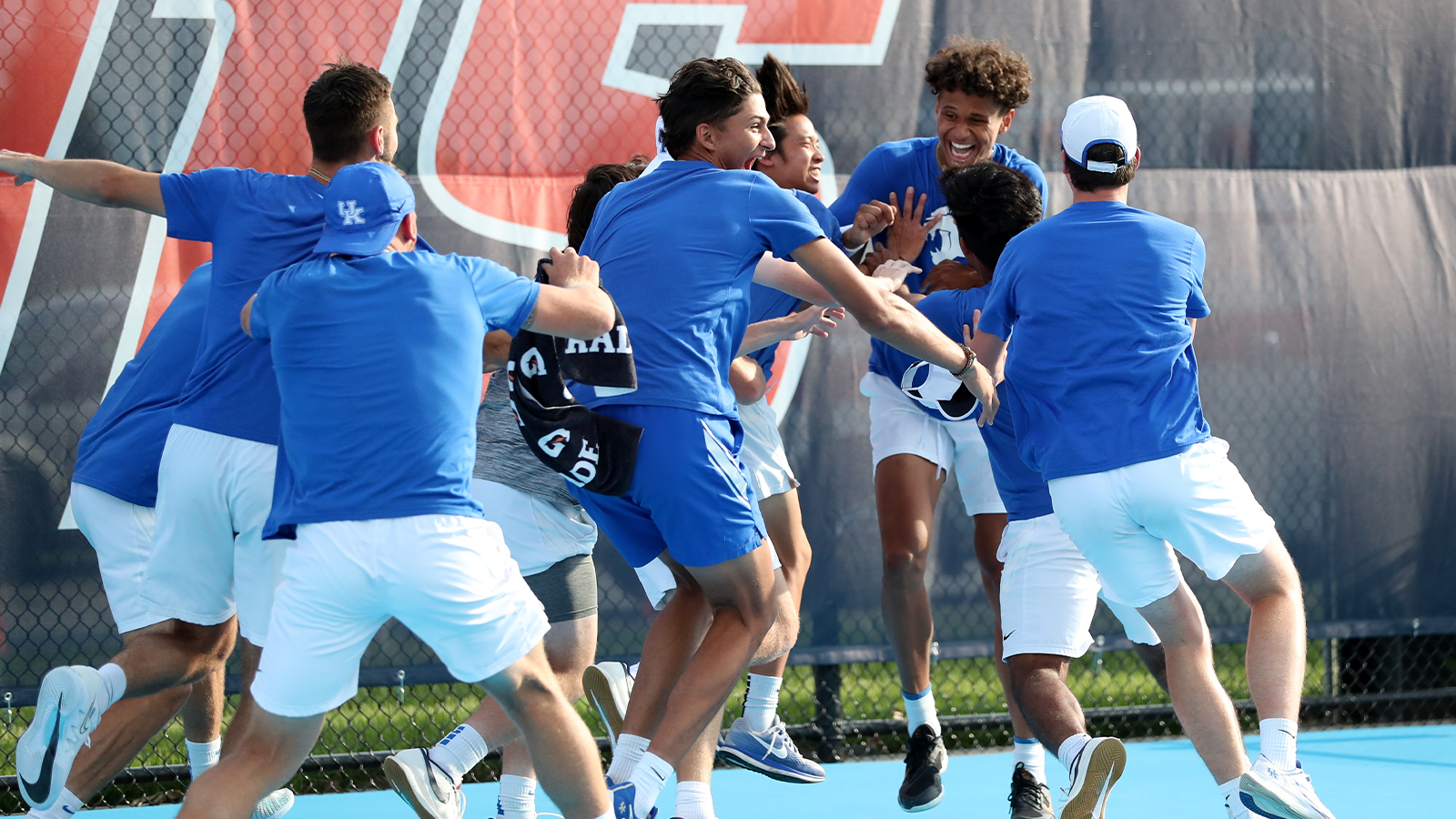 The match came down to court two, where No. 21 Gabriel Diallo was in a tight third set against 16th-ranked Juan Carlos Aguilar with the match on the line. The Wildcats found themselves in close matches all year and knew they could trust each other if push came to shove. The Kentucky junior prevailed, clinching the match by a 3-6, 6-2, 6-4 result.

“I just think they love each other. I do,” said head coach Cedric Kauffmann. “I think they’re just brothers. We always say to them, ‘We want you guys to be good teammates to each other,’ but I think they’re brothers. I think that’s what is going to push us through this tournament.”

The match started in doubles, with momentum swinging back and forth between the two teams throughout the first four games. While TCU claimed the first on all three, Kentucky responded by tying it at one on each court. The Horned Frogs again took a one-game lead across the board and the Wildcats did just the same, claiming games on all three courts to tie each match, 2-2.

On court one, No. 55 Millen Hurrion and Francois Musitelli claimed the next two and took a 4-2 lead after winning an important deuce point against the top doubles tandem in the country. Hurrion and Musitelli eventually went unfinished, leading by a 5-4 score.

Diallo and Joshua Lapadat split the next two against Sander Jong and Lui Maxsted for a 3-3 tie. However, the pair was unable to overcome Jong and Maxsted, ultimately falling, 6-3. While tied 2-2 early on, Liam Draxl and Alexandre LeBlanc fell behind and were unable to win against TCU’s Juan Aguliar and Pedro Vives, dropping their match in a 6-3 decision.

With the doubles point in hand, the Horned Frogs took an early 1-0 lead into singles competition, but the Wildcats did not allow it to phase them. Kentucky battled early in singles, claiming three first sets on courts one, three and four.

No. 4 Draxl was both the first Wildcat to win a set and the first point earned in singles competition. While the reigning Intercollegiate Tennis Association Player of the Year took on the 12th-ranked player in the country, Luc Fomba, he prevailed in straight sets, claiming the first point for the blue and white and the first tie of the night.

However, the Horned Frogs pulled away within minutes. JJ Mercer was unable to get his footing against Tomas Jirousek and ultimately lost on court six by a 6-1, 6-1 result.

Captain No. 83 Hurrion followed up his clinching win in the Sweet 16 by defeating TCU’s Sander Jong, tying the match at two. His straight-set win gave the fifth year his seventh victory against a ranked opponent this season, claiming a 6-3, 6-4 win.

Following Hurrion’s result, TCU took its final lead of the afternoon. No. 113 Lapadat’s eight match win streak came to an end against Pedro Vives, who won the match from the fifth position at 7-5, 6-3. The Kentucky sophomore moved to 21-3 in dual matches this season following the loss.

With the Horned Frogs now holding a 3-2 lead, just courts two and four were left. Musitelli earned one of his most important wins of the season over No. 95 Jake Fearnley, standing victorious after a 6-4, 4-6, 6-4 thriller went in his favor. The graduate transfer put a strong forehand just out of his opponents reach to claim his 13th win from court four on the year.

Diallo then sealed the deal for Kentucky, putting together an impressive third set on the back of his thunderous serve. The junior leaned on his training up to this point to clinch the match, overcome the pressure of the moment and etch himself into Wildcat history.

“I had an idea that it was going to come down to me,” said Diallo. “I was just trying to focus on my service game. I was mostly just trying to win every point in my service game, and it made me loose on my returning game. Obviously, I was nervous, but I feel like hearing these guys cheering for me, the nerves kind of go away.”

With Kentucky still dancing, it will now wait to find out who its opponent will be in the NCAA Tournament Semifinals. The Wildcats will play the winner of No. 4 Ohio State and No. 5 Michigan on Saturday at 12 p.m. ET at the Kahn Outdoor Tennis Complex.