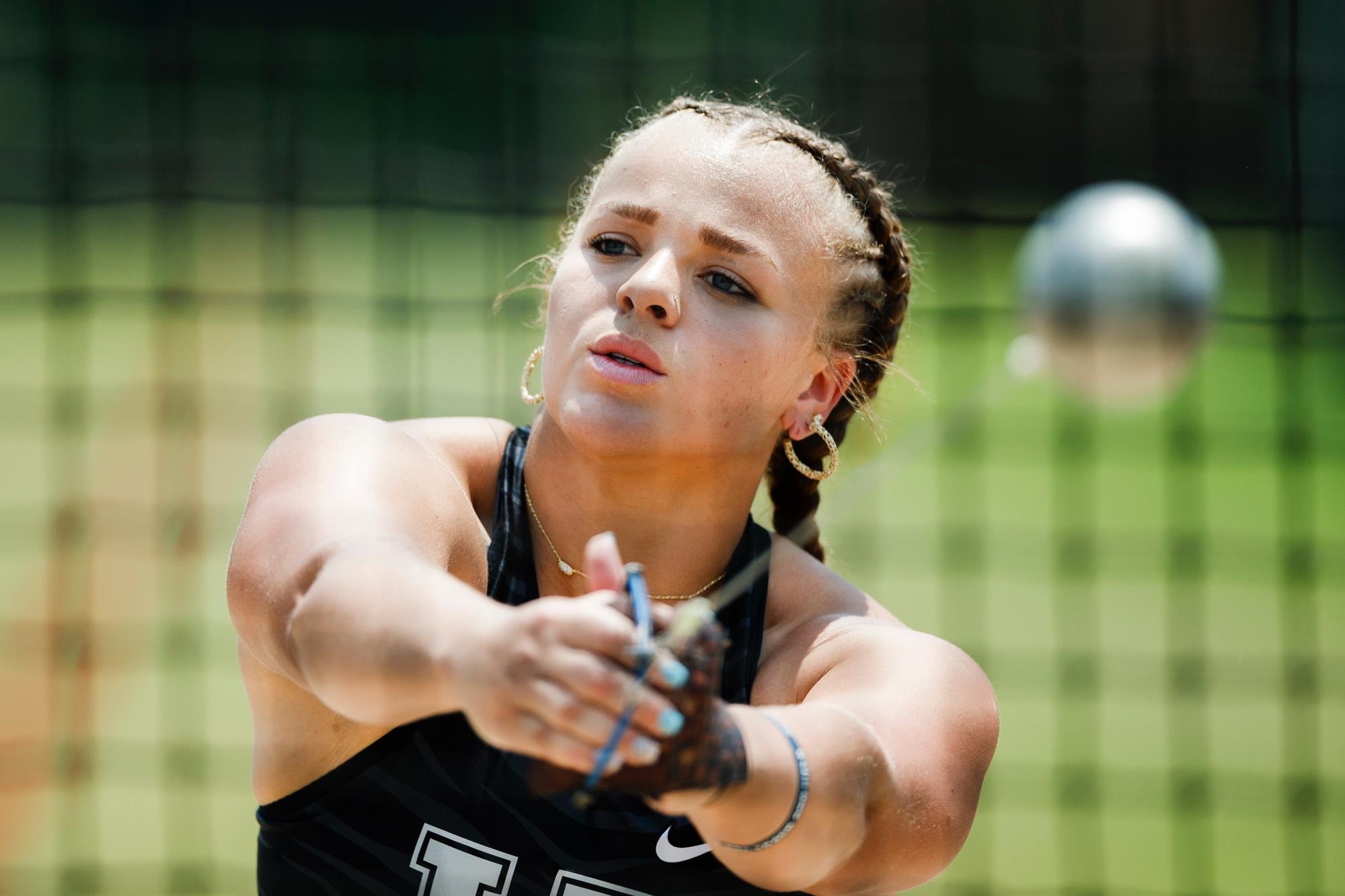 OXFORD, Miss. – Kentucky track & field senior thrower Jade Gates threw for a silver medal in the hammer throw with a school record mark on the first day of the Southeastern Conference Outdoor Championships at the University of Mississippi at the Ole Miss Track and Field Facility.

Gates was the star of day one for UKTF, earning silver in the hammer throw with a school record mark of 219’11″/67.05m. The previous school record, which also belonged to Gates, was 219’1″/ from the Kentucky Invitational.

The senior from St. Louis is now ranked 14th in the NCAA this season and will make the trip to NCAA regionals in Bloomington in two weeks’ time.

Steiner took the second fastest time in the 200m prelims with a time of 22.38Q, running under the then-facility record of 22.41, and will compete in Saturday’s final.

Masai Russell took the third fastest time in the 400m hurdles prelim (56.32Q) and second fastest in her heat. She will return to the event final on Saturday after earning bronze at last year’s SEC Outdoor Championships.

Reigning SEC indoor 200m gold medalist Lance Lang ran the fourth fastest time in the 200m prelims (20.55) and won his heat to automatically qualify for Saturday’s final. He will be joined by teammate Jacob Smith, who ran a personal best 20.65 for the final qualifying spot.

Three Wildcats are set to compete in 800m finals on Saturday after running impressive times in prelims. Jenna Schwinghamer was the sixth fastest qualifier with a time of 2:04.93, Jenna Gearing was seventh (2:05.03) and Deanna Martin was the final qualifier in ninth (2:05.56).

Kenroy Williams will run to the 400m hurdles final for the second year in a row, automatically qualifying with a second-place finish in his heat (50.59). Williams finished fifth in the event last year.

Junior Michael Browning made it to finals in the hammer throw and finished ninth (197’9″/60.28m), tying his personal best.

UKTF brought 53 student-athletes to face 13 SEC teams and compete for the men’s and women’s titles.

The Wildcats entered SEC Championships ranked seventh (women) and 15th (men), with 22 performances ranked in the 2022 NCAA top 50 for the women and 15 for the men.

Gates was the No. 15 ranked hammer thrower in the NCAA this season with her school record throw of 219’1″/66.77m from the Kentucky Invitational until earning SEC silver and getting a new school record