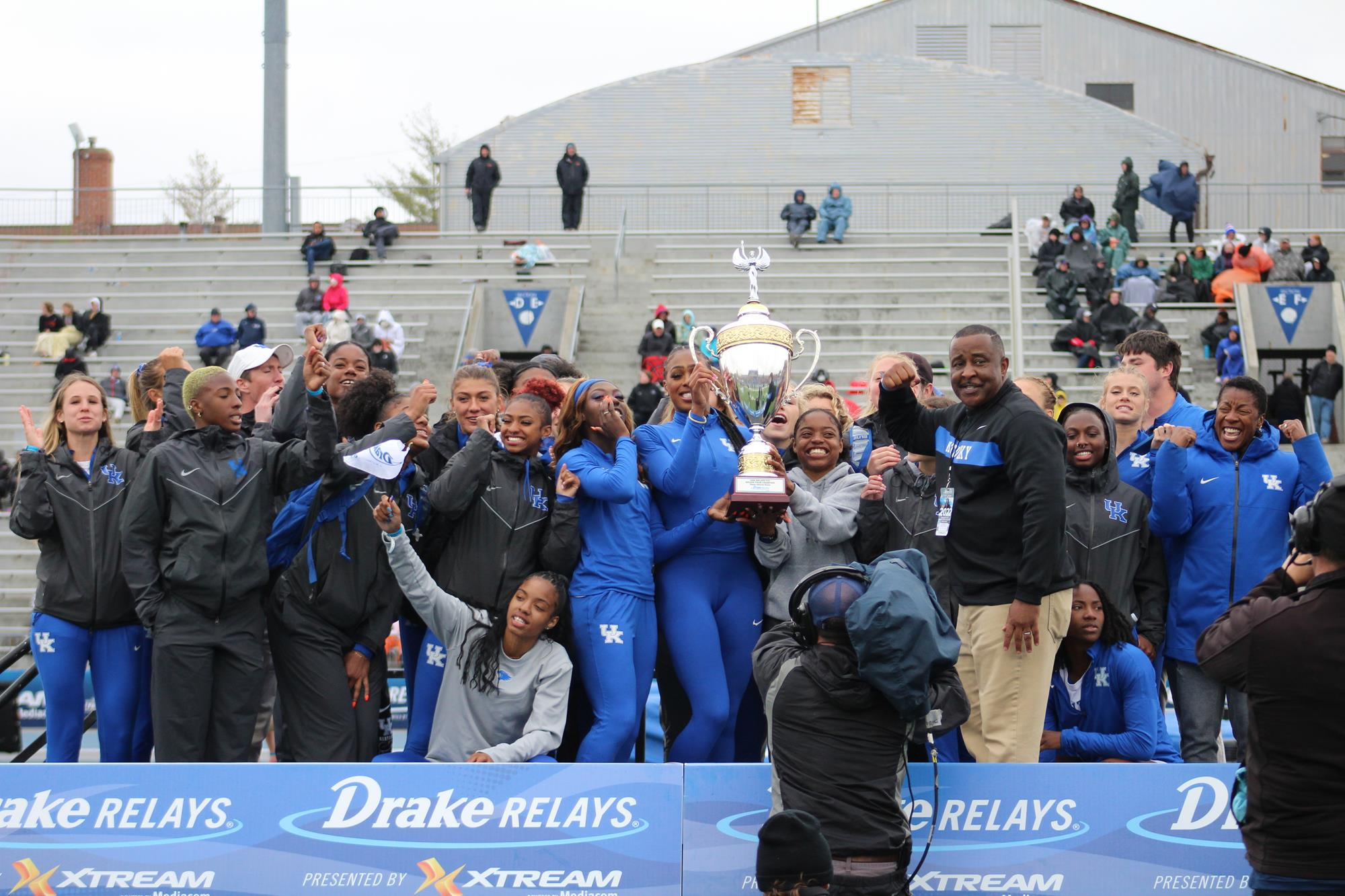 DES MOINES, Iowa – Kentucky women’s track and field won the relay cup with 36 points at Drake Relays due to wins in the 4x800m, 4x400m and sprint medley relay aired on CBS Sports.

The men’s team placed second with 26 points after winning the 4x100m and placing second in the 4x400m.

The Wildcats wowed the 14,000-person crowd with three relay wins on the final day of competition.

The women’s 4x400m earned Kentucky’s final win of the meet with a team of Karimah Davis, Dajour Miles, Megan Moss and Alexis Holmes finishing in 3:33.60.

Three of the 4x400m (Holmes, Davis and Miles) also ran in the winning sprint medley relay (3:48.65) with the addition of Jenna Schwinghamer running the anchor 800m leg.

In the 4x100m, the men’s team of Tai Brown, Dwight St. Hillaire, Kennedy Lightner and Rodney Heath Jr. won with a solid 39.59 time.

Another second-place finisher on Saturday was Masai Russell in the 100m hurdles, finishing with a time of 13.53, after also placing second in prelims. Darci Khan followed her in third at 13.56.

The women’s DMR placed third with a time of 11:21.15, while the men’s sprint medley relay and women’s shuttle hurdle relay both placed fourth.

Molly Leppelmeier and Jade Gates led the Cats once again the hammer throw, this time with Leppelmeier finishing on top with a personal best throw of 215’9″/65.76m, which is second all-time for UK. Jade Gates followed her in fifth (214’4″/65.34m).

The women’s 4x800m stole the show with a meet record time of 8:25.25. The team of Phoebe McCowan, Deanna Martin, Jenna Gearing and Schwinghamer ran for the Cats first ever win in the event and the world-lead.

Kentucky’s 4x200m relays swept the competition with the women running a time of 1:32.98 and the men running 1:23.11. The women’s team of Miles, Moss, Shadajah Ballard and Holmes earned the current third fastest time in the U.S. and fifth fastest in the world this year.

Russell was crowned the Drake Relays 400m hurdles Champion with a 56.27 finish in the race. She also was the second finisher in the 100m hurdles prelims with a time of 13.59 and a 2.3 m/s headwind.

Rahman Minor jumped for second in the high jump with a height of 7’1″/2.16m. He has jumped over seven feet in each outdoor meet this season and has yet to finish outside the top two.

The Cats’ next best finishers was Areti Filipidou, a freshman from Greece, who broke into the UK all-time list in the discus at eighth all-time (171’8″/52.32m) with her fourth-place finish at Drake.

Siobhan Szerencsits also finished fourth in her respective event, the pole vault, with a mark of (13’2.25″/4.02m).

Head Coach Lonnie Greene was officially inducted into the Drake Relays Hall of Fame on Thursday for his leadership of what is now 40 relay wins at Drake Relays over the past 10 years with Purdue and Kentucky.

In 2019, the Wildcats’ first time at Drake Relays since 1988 and the last time the team attended the meet, Kentucky won eight events, highlighted by Daniel Roberts’ victory over world and Olympic gold medalist Omar McLeod in the World Showdown Invitational 110-meter hurdles.

Faith Ross became just the third runner and first since 2004 to sweep the university-college 100 hurdles and 400 hurdles and was voted the Outstanding Performer in the women’s division. The Wildcats also swept the men’s and women’s 4×200 relays, with Celera Barnes, Abby Steiner, Chloe Abbott and Kianna Gray taking the women’s title and Dwight St. Hillaire, Jacob Smith, Daniel Roberts and Cameron Council earning the men’s title.