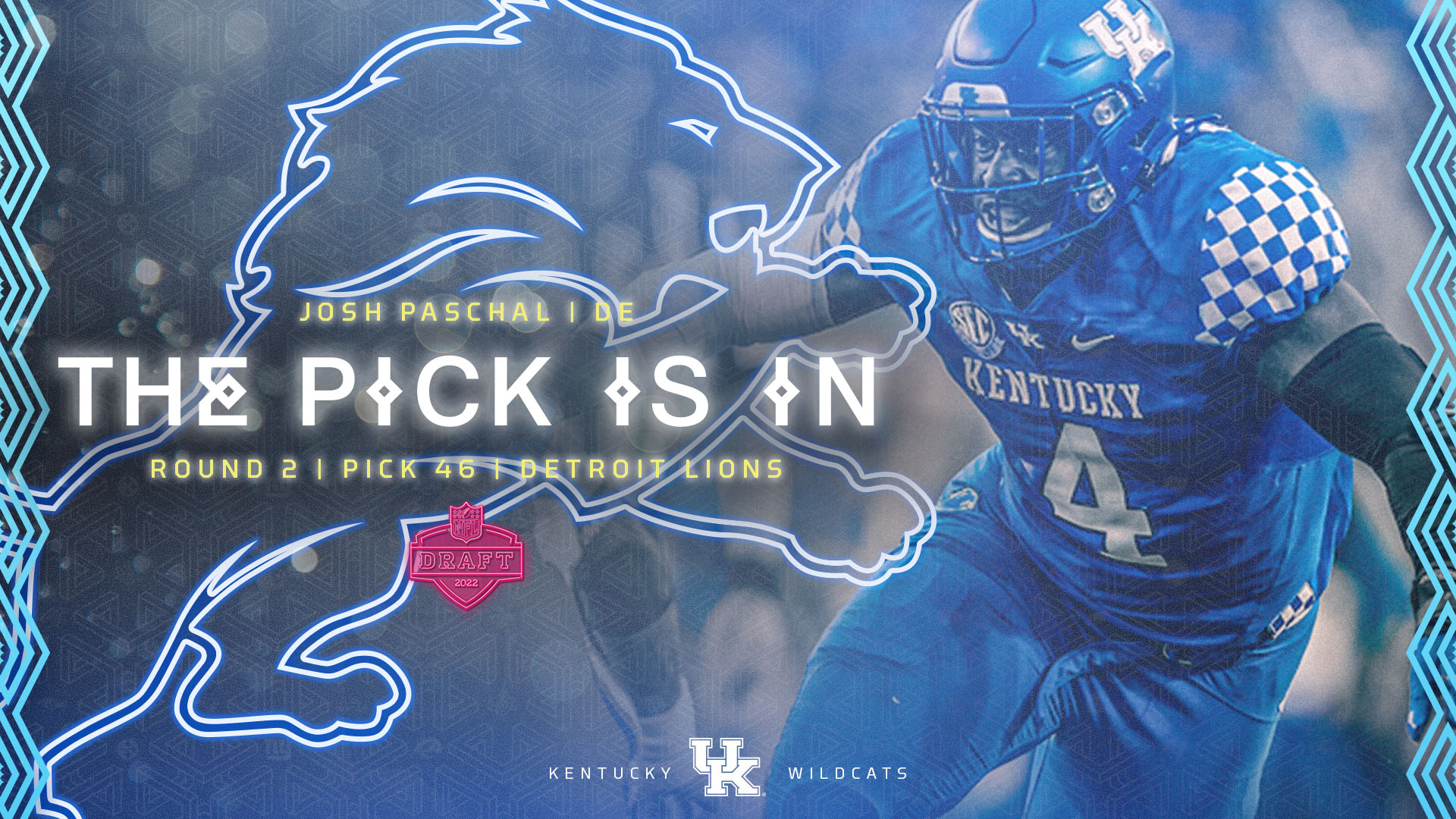 Kentucky senior defensive end Joshua Paschal was chosen in the second round by the Detroit Lions as the 46th overall pick in the 2022 National Football League Draft on Friday in Las Vegas.

Paschal, a native of Prince George’s County, Maryland, was the only three-time full-season team captain in school history and was revered by his teammates for his leadership. Since learning he had cancer in the summer of 2018, Paschal has made a significant impact on the Kentucky Football program and thousands of people.

He was diagnosed with malignant melanoma that appeared on the bottom of his foot just before training camp was to open in July of 2018. After undergoing three surgeries and monthly immunotherapy treatments for more than a year, he was cleared to play in the final three games of UK’s historic 10-win season.

He never used cancer as an excuse to not attend practice, a media session or a community service event, but instead he has used it as a platform to talk to people about his faith and how going through cancer has helped him become stronger as both a person and a player. He spoke to countless churches, school groups, cancer groups and media entities on his faith and how he beat cancer. He kept his grades up through it all, earning a spot on the Dean’s List and the SEC Fall Academic Honor Roll. He also appeared on NBC’s Today Show! in May 2019 as a guest on a panel discussing the seriousness of melanoma.

In 2020, he was elected one of three representatives for UK Football on the Student-Athlete Advisory Committee (SAAC) and the SEC Football Leadership Council. He took the lead on social justice initiatives over the summer of 2020, helping lead a peaceful walk for racial and social justice in the city of Lexington, as well as a players’ movement during training camp to raise awareness for those issues. Each time he was one of only a few players selected to speak on behalf of the team. He also recorded videos encouraging fellow students and fans to wear their masks during Covid-19 pandemic, #MaskUpCats.

In 2021, he led the team and ranked second in the Southeastern Conference with 15.5 tackles for loss. He totaled 53 tackles, 5.5 sacks, a team-high eight quarterback hurries, a forced fumble and a blocked field goal that a teammate returned for a touchdown.

Paschal earned Jason Witten Collegiate Man of the Year honors and was named a second-team All-American by CBS/247Sports and USA Today.  He also was named to the All-SEC first team by the Associated Press and Phil Steele. Continuing strong in the classroom, he has earned Academic All-America honors as well.

Off the field, he graduated in May of 2021 with a degree in family science and a minor in health promotion.

The Draft concludes with rounds 4–7 on Saturday, April 30 at noon ET. The Draft will be televised nationally by NFL Network, ABC, ESPN and ESPN Deportes, and can be heard nationwide on Westwood One Radio, SiriusXM NFL Radio and ESPN Radio.