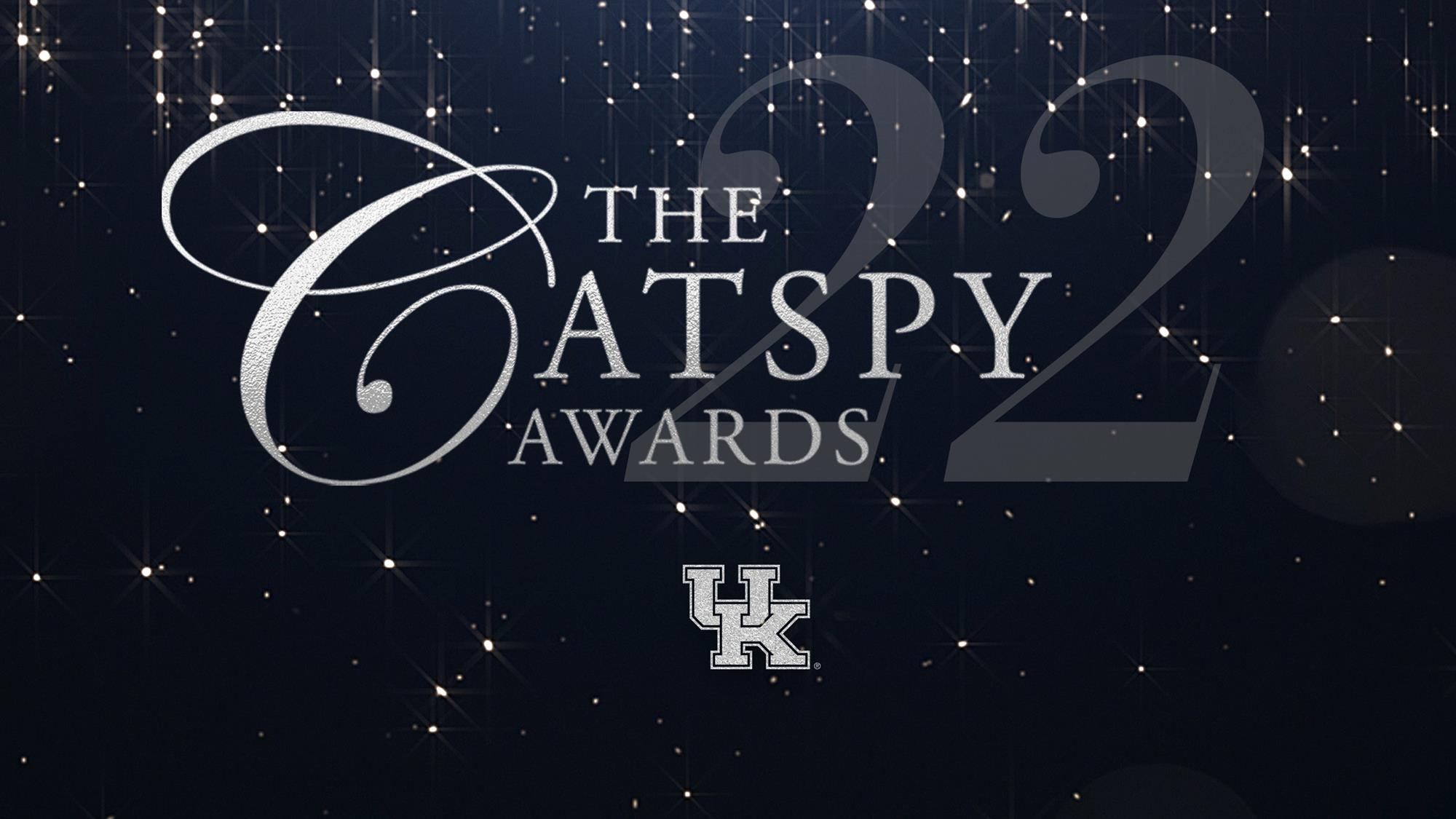 LEXINGTON, Ky. –The 20th annual CATSPY Awards were held Wednesday at the Central Bank Center to recognize athletic and academic performances during the 2021-22 year in the UK Athletics Department. With multiple winners in some categories, 61 individuals were recognized as well as nine teams.

Headlining the awards were the Teams of the Year – women’s basketball, football, rifle, men’s soccer, women’s track and field, and volleyball.

Dramatic finishes were a recurring theme for the top Cat squads.  Women’s basketball overcame a rash of injuries to win 10 games in a row late in the season, capped by a 3-pointer in the final seconds of the Southeastern Conference Tournament which gave UK the championship over South Carolina, a team that went on to win the national championship.  The football team won 10 games, including a thrilling come-from-behind win over Iowa in the Vrbo Citrus Bowl. Rifle also had a climactic ending while winning a second-consecutive national championship, its fourth natty since 2011.  Men’s soccer followed the script with an overtime goal in the title tilt to win the Conference USA Tournament championship. Women’s indoor track and field equaled its best finish in school history by landing on the third-place podium at the NCAA Championships. Volleyball again dominated the league en route to its fifth-consecutive SEC championship.

The Male Athlete of the Year was Oscar Tshiebwe, the unanimous National Player of the Year in men’s basketball.  The Female Athletes of the Year were Rhyne Howard of basketball and Abby Steiner from track and field.  Howard earned first-team All-America honors for the third-straight year and was the overall No. 1 selection of the WNBA Draft. Steiner shattered several NCAA, SEC and school records and ran the second-fastest indoor 200 meters in world history.

The Mr. And Miss Wildcat awards – dedicated in honor of the late Bruno Agostinelli, a UK men’s tennis All-American and past Mr. Wildcat winner – are presented to Wildcats who have represented all-around excellence in athletics, academics, character and service during their Kentucky careers.  Named Mr. Wildcat for 2021-22 were Tshiebwe, Luke Fortner, Will Levis and Josh Paschal of football and Will Shaner from rifle.  Miss Wildcat went to Steiner, swimmer Riley Gaines, Kayla Kowalik of softball, Masai Russell from track and field, and Alli Stumler of volleyball.

Baseball and gymnastics were the Academic Teams of the Year.  Five Wildcats – Renee Abernathy of softball, Sarah Michels of track and field/cross country, Casey Ott of women’s golf, Kelly Rodriguez of women’s swimming and diving, and Ben Wendell of men’s soccer – earned Scholar-Athletes of the Year while maintaining career grade-point averages of 4.0.

Awards reflecting dedication and perseverance are the Blue Heart Award and Heart of a Wildcat.  Mason Hazelwood of baseball, Miranda Jimenez from women’s soccer and football’s JJ Weaver won the Blue Heart Award for overcoming injuries to return to action and make significant contributions to their teams. Heart of a Wildcat went to the new STUNT team, initially comprised entirely of walk-ons, which advanced to the national tournament in its first year of existence.

A total of 31 Wildcats were recognized with the Elite Performance award that highlighted outstanding plays, moments and performances of the past year. A list of those honorees is below.

Christi Thomas of the UK Sports Network was the host of this year’s event.

Heart of a Wildcat
STUNT