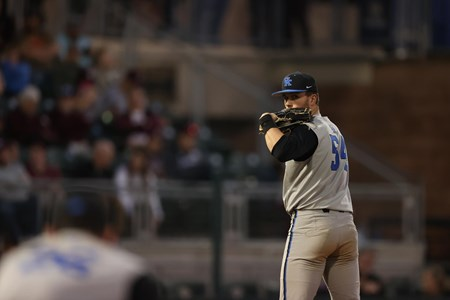 COLLEGE STATION, Texas – Daniel Harper pitched three scoreless innings and Daniel Harris IV had three hits, including a two-run knockout blow in the eighth inning, as Kentucky evened its series with Texas A&M with a 7-3 victory at Blue Bell Park on Friday night.

UK has won seven of the past nine contests in College Station.

UK (19-12, 4-7 SEC) took an early 4-0 lead with a mix of line drives and good fortune. An A&M error led to a run in the second inning before the Cats got three in the third. Hunter Jump led off with a well-struck single before Daniel Harris IV drove his fourth hit in five at-bats to left field and Chase Estep walked to load the bases. Adam Fogel smashed a liner through the left side to score a pair and Jacob Plastiak added another when he smacked a ground ball off the third baseman’s glove.

The Aggies battled back to within one at 4-3 before the Cats added insurance runs with a three-run eighth inning that included massive two-out hits by Hunter Jump and Harris. That gave reliever Tyler Guilfoil (4.0 IP, 0 runs. 8 K) breathing room to earn his third save of the season and make a winner out of Harper.


ON DECK
Kentucky concludes its series at Texas A&M on Saturday. First pitch on Friday is at 4 p.m. ET on the SEC Network. The radio call will be on the UK Sports Network.