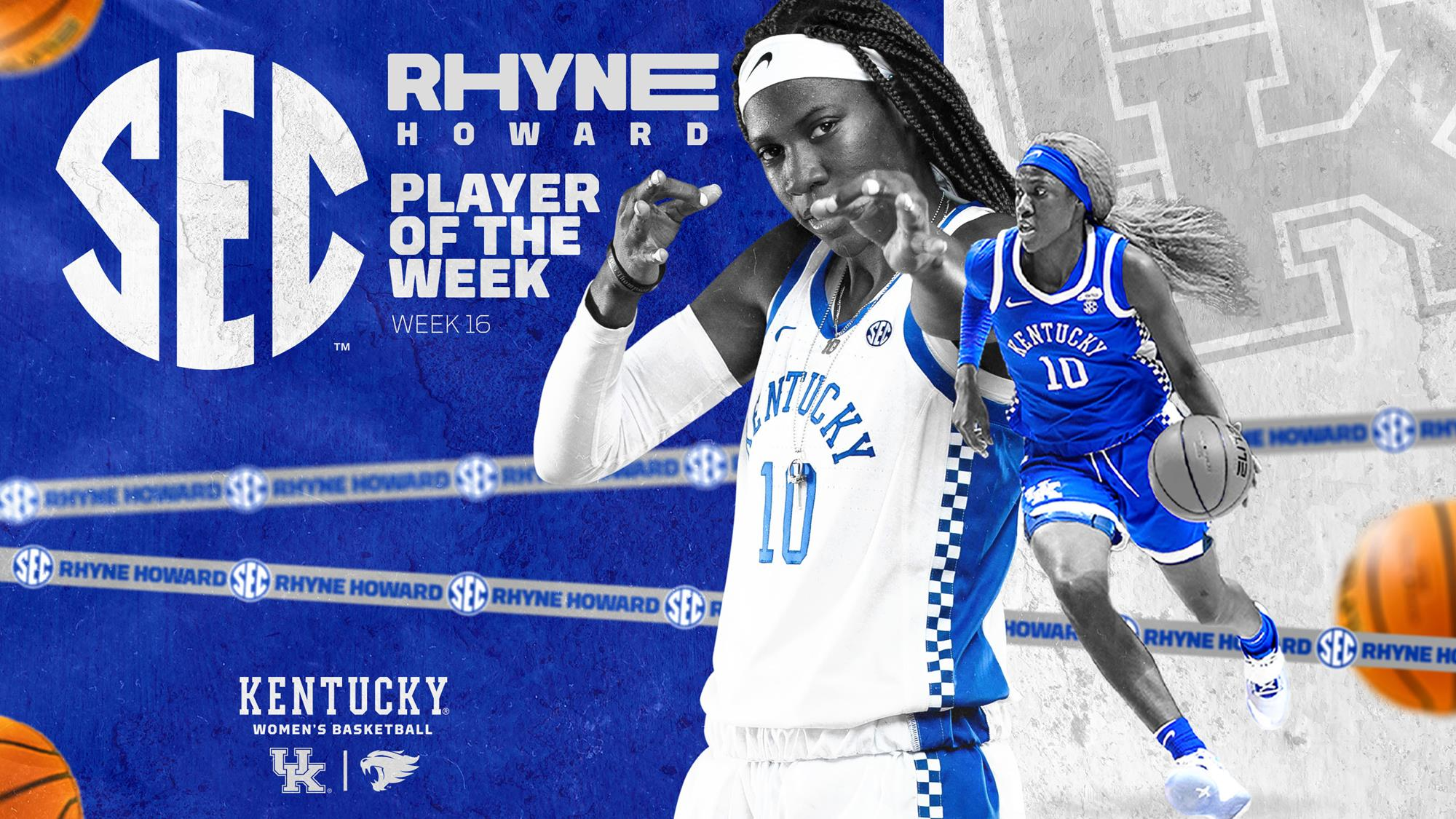 LEXINGTON, Ky. – After breaking multiple school records and scoring the most points by a Wildcat senior on Senior Day in school history, University of Kentucky women’s basketball superstar Rhyne Howard has been named the Southeastern Conference Player of the Week, the league office announced Monday.

Kentucky celebrated Rhyne Howard Day on Sunday vs. Auburn as the guard played her final game inside Memorial Coliseum and went out in style. Howard scored 32 points in the game, which is the most points ever by a Kentucky senior on Senior Day. The performance moved Howard into the top-25 all-time in scoring in the SEC, currently placing 24th with 2,185 points. Howard hit eight 3s in the game, which was a new school record for 3s made in a game. She had six 3s in the first half, which was a new school record for 3s in half. The eight makes from long range gave Howard 272 career 3s, which makes her the school’s career record holder in 3s made. Her 32 points were a season high and the performance gave her the second-most 30-point games in school history with nine. Started the week with 19 points and a season-best 12 rebounds at Mizzou, adding four assists and four steals against MU as the Wildcats claimed back-to-back road wins in the SEC by 15+ points for the first time since 2016. The double-double against Missouri was her team-leading 10th of the season.

Last week, Howard was named the Naismith Trophy National Player of the Week after an incredible week. Howard was brilliant in all three Kentucky games that week, starting with 16 points, 11 rebounds, six assists, two steals and two 3s against Mississippi State. She helped Kentucky power back from down 15 points in the fourth quarter for the 11th-largest comeback in program history. Against Vanderbilt, Howard scored 17 points with four rebounds, three assists and three 3s. Her best outing came at Arkansas, scoring 29 points with five 3s, adding 10 rebounds, two assists and two blocks. She went 9-of-16 from the field and 5-of-10 from 3. Two of the three games were double-doubles for Howard.

Prior to this weekend, her best game this season came against top-15 ranked Georgia, scoring 30 points in the game, including 22 in the second half. She scored 17 points in the fourth quarter. On top of scoring UK’s last 10 points in the game, she scored 13 of UK’s last 17 points overall. She also shined against West Virginia, when she scored 27 points, going 5-of-7 from long range with six rebounds, four assists and three steals. Against Winthrop, Howard joined an exclusive club by becoming the third player in UK history to record a triple-double in a game. She scored 22 points against the Eagles with 10 rebounds and 10 assists, adding five steals.

Howard has been playing at another level the last few games with 20+ points in seven of the last 12 games. She has recorded a double-double in seven of the last 12 games for UK, including a season-best 12 rebounds at No. 12 LSU and at Mizzou. Against Auburn in early February, she scored 29 points with nine rebounds, hitting five 3s. The guard scored 17 points in the fourth quarter against Auburn to help propel UK to the victory. Against No. 1 South Carolina, Howard led Kentucky in points, rebounds, assists, steals and blocks.

For her career, Howard has scored 2,185 career points sitting second in UK history in points scored. Against Vanderbilt, Howard scored her 2,000 career points, becoming just the third Wildcat in school history – both men’s and women’s – to record 2,000 or more points in 100 games or less. She joined Hall of Famers Dan Issel and Valerie Still in that category. Howard ranks second in school history in career scoring average at 20.0, while she is tied for second in field-goals made with 757, first in career 3s made with 272 and third in career 3-point field-goal percentage at 37.9. She is also fourth in UK history in steals per game at 2.367.

Howard’s junior season was one for the record books at Kentucky, earning first-team All-America honors from the Associated Press, Women’s Basketball Coaches Association, United States Basketball Writers Association and Wooden Award. She was one of four finalists for the WBCA Wade Trophy, one of five finalists for the John R. Wooden Award, one of four finalists for the 2021 Naismith Trophy and a finalist for the 2021 Cheryl Miller Award. For the second year in a row, Southeastern Conference coaches named Howard the SEC Player of the Year, while she earned All-SEC First Team honors for the third straight season.

The native of Cleveland, Tennessee, played 24 games last season with nearly half of those coming against top-25 ranked opponents. In those games, Howard showed she is the best player in the country with impressive numbers. In 11 games against ranked opponents, Howard averaged 22.3 points per game, hitting 47.1 percent from the field and 39.7 percent from 3 with 6.7 rebounds per game and 3.0 assists per game. Howard had four 30+ scoring games during the season with three coming against top-25 ranked teams.

One of her best performances of the year was when she scored 33 points at No. 12 Mississippi State, hitting four 3s with 10 rebounds and six assists. She scored 25 points in the fourth quarter and overtime against the Bulldogs, scoring 25 of UK’s last 31 points, including 10 of 14 in overtime. Other impressive performances on the biggest stage include 32 points with seven rebounds, three assists and two steals against No. 5 South Carolina and 24 points with four 3s, 10 rebounds and four assists against No. 10 Arkansas. She also posted 22 points against No. 13 Indiana and at No. 8 Texas A&M. Howard took over for Kentucky at No. 17 Georgia with 27 points, four rebounds, four steals, two assists and went 4-of-4 from 3 and then followed with a 33-point performance against the Bulldogs in the SEC Tournament.