BRYAN-COLLEGE STATION, Texas — Kentucky track and field senior Abby Steiner shattered the American indoor 200-meter record en route to her third Southeastern Conference gold in a row in the event. Alexis Holmes defended the 400m crown she won in 2020, and Lance Lang gave the Kentucky track and field program a men’s and women’s 200m sweep on Saturday at the SEC Championships inside Gilliam Indoor Stadium.

“I’m just happy with the way Kentucky is performing. We are setting this thing up to make a good push, a good run to represent Big Blue Nation in a huge way at the national championship,” Head Coach Lonnie Greene said.

The meet featured nine ranked teams on the women’s side and nine on the men’s side per the United States Track & Field and Cross Country Coaches Association top 25 rankings. Kentucky women’s track & field is currently ranked No. 5 and fourth among SEC teams while the men’s team is ranked No. 9 and fourth among SEC teams. The Kentucky women beat out higher ranked LSU for third place.

Steiner’s time made her the second fastest in the indoor 200m ever, just behind Jamaican Merlene Ottey’s 21.87 indoor world record. 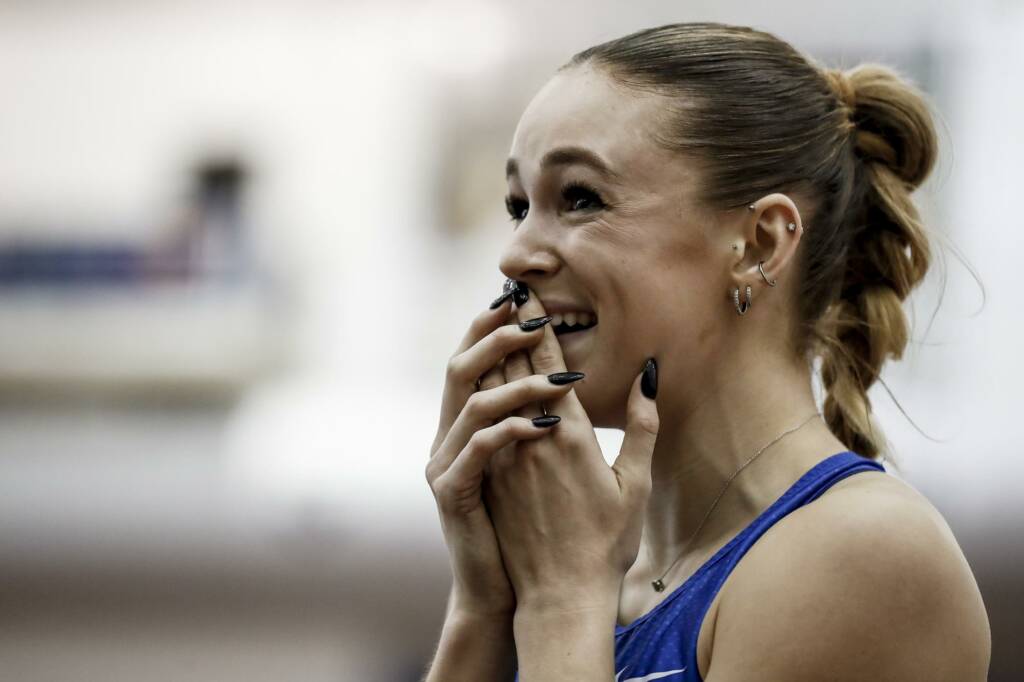 “When this all settles and people understand what Abby accomplished today, you have to understand that that American record stood, it was set before I was in college,” Greene said.

Holmes maintained her 100-percent SEC 400m record winning with a personal best 50.77, which leads the NCAA this year. Holmes won the SEC 400m in 2020, the only other time she competed at the nation’s best conference track and field championship, and missed the competition in 2021.

The star quarter-miler lowered her No. 2 mark on the UK all-time performers’ list.

Lang ran 20.32 to win his first individual SEC gold in the men’s 200m, confirming Kentucky’s dominance in the indoor single-lap sprint as Steiner had just claimed the women’s 200m crown. Kennedy Lightner earned bronze with a time of 20.60.

Lang broke Lightner’s school record, which was recorded at Clemson earlier this season.

Karimah Davis ran 22.79 to join Abby Steiner with a bronze medal on the women’s 200m podium. Her time moved her to No. 4 on the UK all-time list.

More Day-Two Medal Winners
Sophomore Tori Herman continued her meteoric rise with a silver medal in the 3k, running a PB 9:00.60 to score eight points and move to No. 2 on the UK all-time list, within a second of Cally Macumber’s 2013 school record.

The women’s team of Megan Moss, Steiner, Davis and Holmes ran 3:25.89, a new school record by nearly two seconds, to claim bronze in a race where each of the top three (Arkansas, first and Texas A&M, second) ran faster than the previous collegiate record.

The UK men’s 4×4 of Brian Faust, Lang, Dwight St. Hillaire and Kennedy Lightner ran 3:04.04 to place third and score six points. Their time was a season-best and ranks No. 2 on the UK all-time list.

Day One Medal Winners
Matt Peare took silver in the men’s pole vault with a height of 17’3″/5.26m, earning his third SEC medal in three years.

Fourth Place Finishers
Myles Anders narrowly missed out on a medal with a 6.68 run in the 60m final with only .001 between him and teammate Lance Lang who won bronze.

His top finishes came in the long jump and shot put.

She started near the bottom with her 60m hurdles performance but her third place in the high jump and win in the shot put put her back in the game but concluded with a ninth-place finish in the 800m to place sixth.

Her top finish came in the shot put, where she won the event with a personal best put of 43’1″/13.13m, which brought her up to third place.

Her next best mark was her third-place finish in the high jump with mark of 5’9.25″/1.76m, which is only two inches off her personal best from 2021 NCAA Indoor Championships.