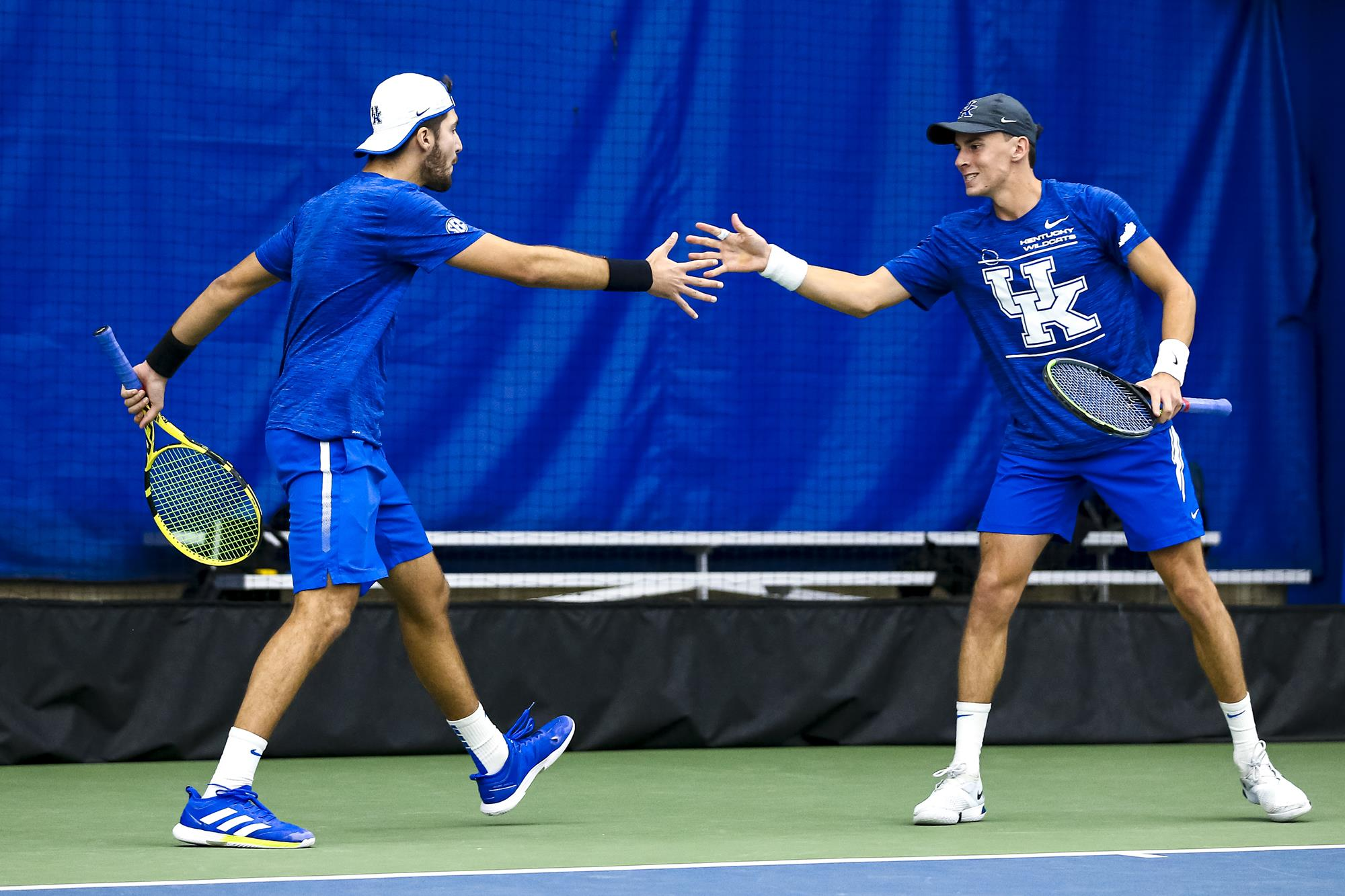 STARKVILLE, Miss. – The 11th-ranked Kentucky men’s tennis team (6-0) took down No. 21 Mississippi State (3-1) by a score of 4-2 on Sunday afternoon to win the Intercollegiate Tennis Association Kickoff Championship and clinched a spot in the ITA Indoor Championship on Feb. 18-21.

This marks the first time since 2013 that Kentucky will make an appearance in the ITA Indoor Championship.

Despite going down early, losing the doubles point and allowing just their first team point of the season, the two-seeded Wildcats dominated in singles to come from behind and remain perfect on the season.

Junior Liam Draxl and fifth-year captain Millen Hurrion dropped their first match as a pair on the season in a 6-3 loss to Bulldogs’ Florian Broska and Gregor Ramskogler. The doubles pair fell to 3-1 on the year.

The 34th-ranked doubles pair in the nation, Joshua Lapadat and JJ Mercer, also dropped their first match of the season and now stand with a 4-1 record. Representing the host team and one-seed, Nemanja Malesevic and Davide Tortora bested Lapadat and Mercer by a 6-4 score.

Down by a 1-0 score in the match, No. 45 Francois Musitielli took down Bautista Vilicich swiftly, 6-0, 6-3. The team soon trailed once again, however. Draxl dropped his first regular season match since this past April, losing to No. 22 Broska 6-4, 6-2. The Newmarket, Ontario native falls to 3-1 in singles on the year.

From there, the match was all blue and white. Down 2-1, Yasha Zemel defeated Tortora, 6-3, 6-4, and No. 90 Lapadat bested Ramskogler by the same score for both to improve to 3-0 in singles. Hurrion went to three sets to earn his second match-clinching point of the season, beating Malesevic 6-1, 4-6, 6-2.

In the 48-year history of the ITA Indoor Championship, the Wildcats have yet to win it all. With today’s win, its next opportunity to do so will come in 19 days.

While Kentucky played two Southeastern Conference foes during the weekend, the wins will only count towards its season record, not its SEC record. The win notches Kentucky’s first against a ranked team this season, with its next opportunity coming on Friday.

UK will host No. 6 Virginia (5-0) at 4 p.m. ET on Feb. 4 at the Hilary J. Boone Tennis Center. While the teams were scheduled to play last year, the match was canceled. The last time the two played in Lexington was in 2019 when the Cavaliers were victorious by a 5-2 score.