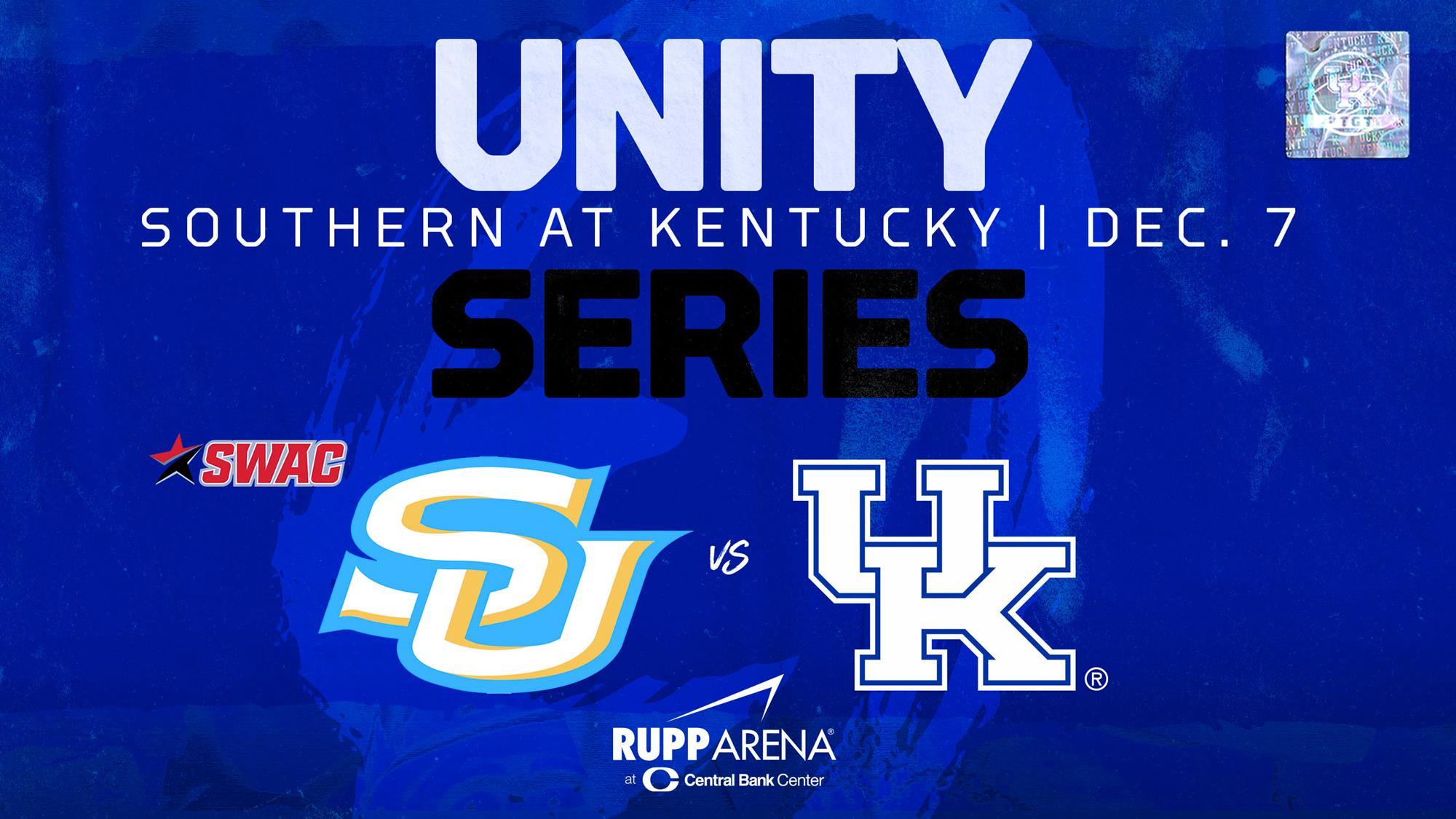 LEXINGTON, Ky. – The Kentucky men’s basketball team will host Southern on Dec. 7 in Rupp Arena as a part of the inaugural Unity Series with the Southwestern Athletic Conference.

The five-year series will feature annual games against schools from the SWAC, which is made up of historically black colleges and universities. Beginning in 2021 and concluding in 2025, the games will seek to raise awareness of the missions of the HBCUs and to raise funds to provide opportunities for students at their institutions.

“I am really proud of our leadership for identifying an opportunity to take what we do on the basketball court and leverage it into an annual weeklong event that will have a major impact on HBCUs and their students,” UK head coach John Calipari said. “My hope is this event not only opens the door for opportunities for students at HBCUs, but that others at our school and across the country will take advantage of the educational opportunities that we will put together to continue the meaningful conversations and changes that have taken place over the last year.”

In the week leading up to the game each year, the Unity Series will feature educational and networking opportunities at UK and SWAC institutions. Campus leaders from Kentucky and SWAC schools will host virtual panels and leadership workshops available to students at all institutions that tackle current issues in multiple disciplines and highlight on-campus educational opportunities. In addition to these panels and workshops, the institutions will provide resources for students to learn more about internships, career planning and networking.

“Our philosophy in the diversity, equity and inclusion division of UK Athletics is opening up areas of opportunities, education, listening and learning,” said Rock Oliver, executive associate athletics director for diversity, equity and inclusion at Kentucky. “This series featuring HBCUs, starting with a great institution like Southern University, will provide those universities with a spotlight on the biggest stage in college basketball. This year’s matchup with Southern is even more special for me because I coached Southern head coach Sean Woods. We are honored to play a part in providing access to our powerful platform.

“We are committed to educational initiatives here at UK so the Unity Series’ educational and networking opportunities will play a part in one of our goals, which is adding to learning resources. We also believe in the power of community so we hope this series will increase awareness of the powerful history and ongoing missions of HBCUs as well as conferences like the SWAC. We look forward to strengthening bonds between our institutions.”

The Unity Series week will culminate with the annual game in Rupp Arena.

“The Southwestern Athletic Conference is extremely excited to partner with the University of Kentucky men’s basketball program on unifying initiatives that will significantly raise the overall awareness of the missions of our 12 member institutions and HBCUs as a whole,” SWAC Commissioner Dr. Charles McClelland said. “The educational and networking opportunities this partnership will provide our students and student-athletes undoubtedly goes well beyond the game of basketball. We’re looking forward to doing our part to make this innovative strategic plan a success. We would like to thank the University of Kentucky Athletics department’s leadership along with Coach Calipari and his staff for making this very worthy initiative a reality.”

The Unity Series game is the latest addition to Kentucky’s nonconference schedule that is expected to be announced in full soon.

Woods led Kentucky in assists in his three seasons of action but he particularly shined during the memorable 1992 season. After helping UK win the Southeastern Conference regular-season and tournament titles that season, he played a key part in UK’s run to the East Regional finals. The 1992 All-Regional Team selection recorded 21 points, nine assists and scored the go-ahead basket with 2.1 seconds left vs. Duke in what many consider the greatest college basketball game of all time. The Blue Devils won in improbable fashion.

“It’s always nice to go back home and take your players to a place where you played at,” Woods said. “I’ve always wanted my guys to have the same kind of experience I had as a student-athlete and what better place to take them than to one of the most historic places in college basketball, Rupp Arena. Looking forward to being competitive and having a chance to win too, but not only that to have a chance to play in front of family and friends and take my guys to a place where it all started for me.”

Woods has coached against his alma mater before in previous head coaching stops at Mississippi Valley State and Morehead State.

Although the official series vs. Southern is 0-0, the two schools have met before. Kentucky defeated the Jaguars 99-84 in the 1988 NCAA Tournament, but the game was erased from the record books as a part of sanctions imposed upon the UK program in 1989.

Southern was 8-11 during the COVID-19 shortened 2020-21 season. The Jaguars are expected to return two of their three leading scorers from a season ago in guards Jayden Saddler and Ahsante Shivers.

Season ticket renewals for the 2021-22 season are now available for all men’s basketball season ticket holders. The renewal deadline is Sept. 9.

Renewals are available online through each season ticket holder’s My UK Athletics Account. Printable invoices are also available online by visiting My UK Athletics Account for those who wish to complete their renewal by mail. Fans needing assistance with their online account are encouraged to contact the UK Ticket Office at (859) 257-1818 (option 4) or send an email to uktickets@uky.edu.

Fans interested in acquiring new tickets are encouraged to enter the men’s basketball season ticket lottery online. For more information on lower-level seating that is currently available with a K Fund pledge commitment, please reach out to the UK Athletics K Fund staff at (859) 257-6300.

While continuing to monitor the latest health and safety guidelines from local and national authorities, UK Athletics plans to operate venues at full capacity this season.

The Wildcats will enter the 2020-21 season as a Final Four contender with one of the nation’s most experienced teams in the country. UK’s roster features a sixth-year graduate, a fifth-year graduate, two redshirt juniors, five juniors, a redshirt sophomore, two sophomores, and three highly touted four- and five-star freshmen.