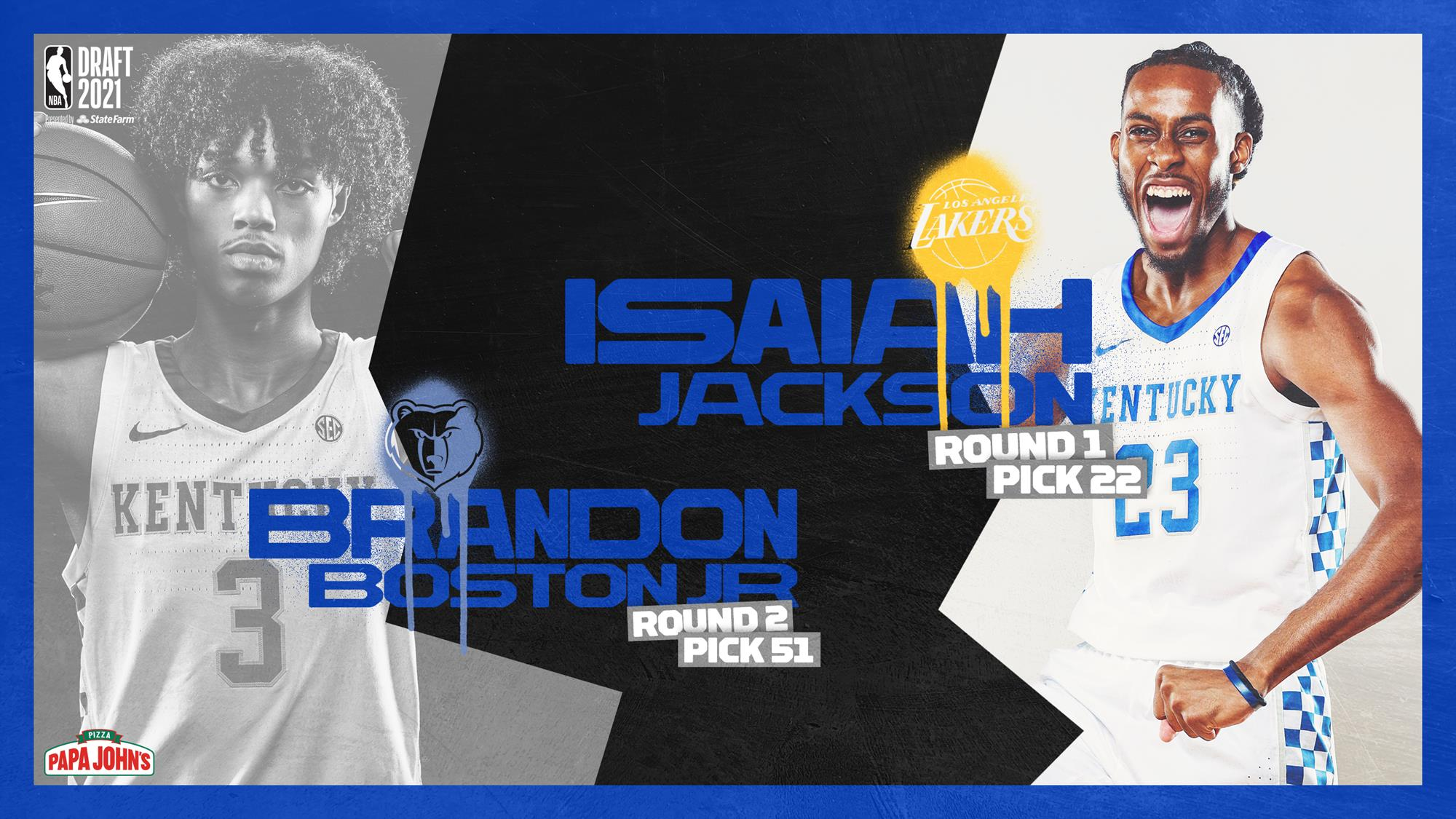 BROOKLYN, N.Y. – In what has become an annual tradition for the Kentucky men’s basketball program under head coach John Calipari – graduation night, as he likes to call it – two more Wildcats were selected in the NBA Draft on Thursday.

Isaiah Jackson (No. 22, Los Angeles Lakers) and Brandon Boston Jr. (No. 51, Memphis Grizzlies) were picked during the 2021 NBA Draft at the Barclays Center in Brooklyn, N.Y., while the late Terrence Clarke was honored by the NBA with a posthumous selection between the 14th and 15th picks.

“I want to thank Adam Silver, Mark Tatum and everyone in the NBA office who gave Terrence’s family and all of us who loved him a special moment tonight,” Calipari said. “It shows the true heart of the league and I thank you all.” 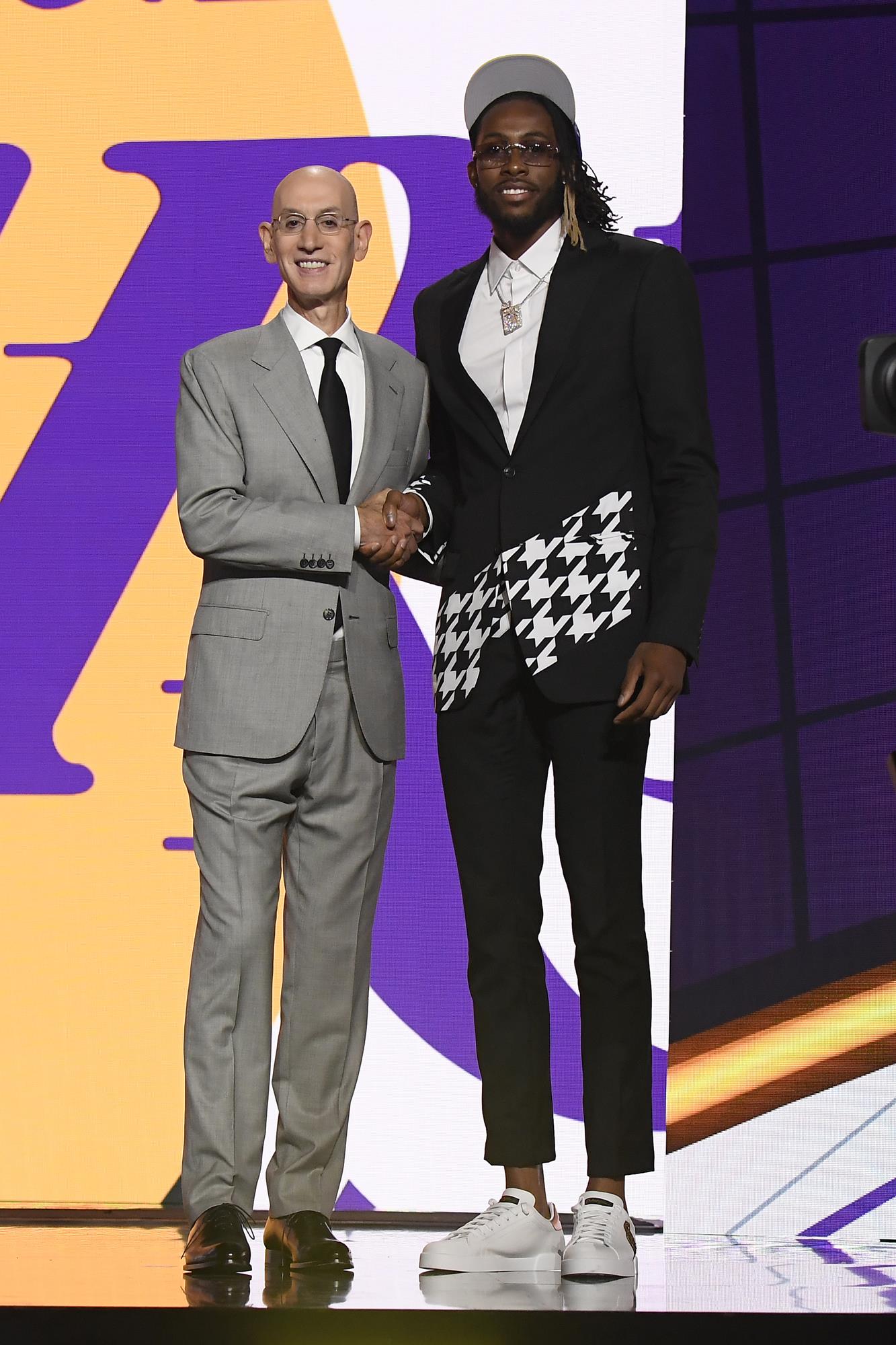 Jackson’s draft rights are a part of the proposed trade between the Lakers, Washington Wizards and Indiana Pacers resulting eventually in Jackson joining the Pacers. Boston’s rights have been proposed in a trade with Memphis, New Orleans and the Los Angeles Clippers with Boston eventually joining the Clippers.

In 12 seasons with Calipari at the helm, Kentucky has churned out three No. 1 selections, 32 first-rounders, 21 lottery picks and 43 total players in the NBA Draft. The 43 draft picks are 15 more than the next closest school (Duke).

“I am so happy for Isaiah Jackson and his family,” Calipari said. “He is just scratching the surface with his talent and is another one of our guys who is going to make a lot of teams regret passing on. Isaiah had an unbelievable spirit with us, and I can’t wait to see him continue to grow at the next level.”

Jackson was the first Wildcat off the board. He is the ninth player in UK program history to be selected by Los Angeles, although his rights are linked to a trade proposal with the Wizards and Pacers.

“It’s a surreal moment,” Jackson said Thursday at the Barclays Center. “Just growing up, just wanting, like having the dream of making it to the NBA, it’s just crazy. So, this is surreal moment for me and I’m enjoying it.

“It lived up to everything, just having my name called, getting drafted. It’s just, it’s mind blowing. … It just feels like a dream in a way. Like, it’s just crazy right now. I’m just trying to bottle all my emotions and it’s just crazy, man.”

Boston was selected 51st by the Memphis Grizzlies. He is the first UK player ever selected by the Grizzlies. However, his draft rights are in the midst of a trade in which he will eventually land with the Clippers.

“BJ is going to use tonight as fuel and is going to have a great NBA career,” Calipari said. “I am sure of it, just as sure as I am that teams are going to look back and wish they would have taken him sooner. BJ has length, an ability to score that few have and a high ceiling.

“He has landed with a great franchise that will give him time to grow, and my guess is we will look back in a couple of years and realize how much he was hurt this season by his hand injury and the COVID year. I know he is a special player.”

The Wildcats have had more top-10 picks, more lottery selections and more first-round picks in the Calipari era than any other team in the country.

Kentucky has had 134 players drafted 136 times in its illustrious history with 57 players selected in the opening round. Calipari is the only coach to have multiple players selected in 14 consecutive NBA Drafts, dating back to his time at Memphis. Of the 30 players at UK in the Calipari era who have declared for the NBA Draft after their freshman seasons, 27 have been first-round draft picks after Jackson’s selection (does not include Clarke). All previous players (not including Jackson or Boston) have played in a game.

Senior Olivier Sarr went undrafted. He is likely to have an opportunity to sign a free-agent deal.

“I am disappointed for Olivier that he did not get selected tonight, but not discouraged,” Calipari said. “Olivier is a mature kid with great skills and range for a player his size. With the right opportunity, I think Olivier is going to find a spot and will have a successful career. I am looking forward to seeing who gets him because it will be a steal.” 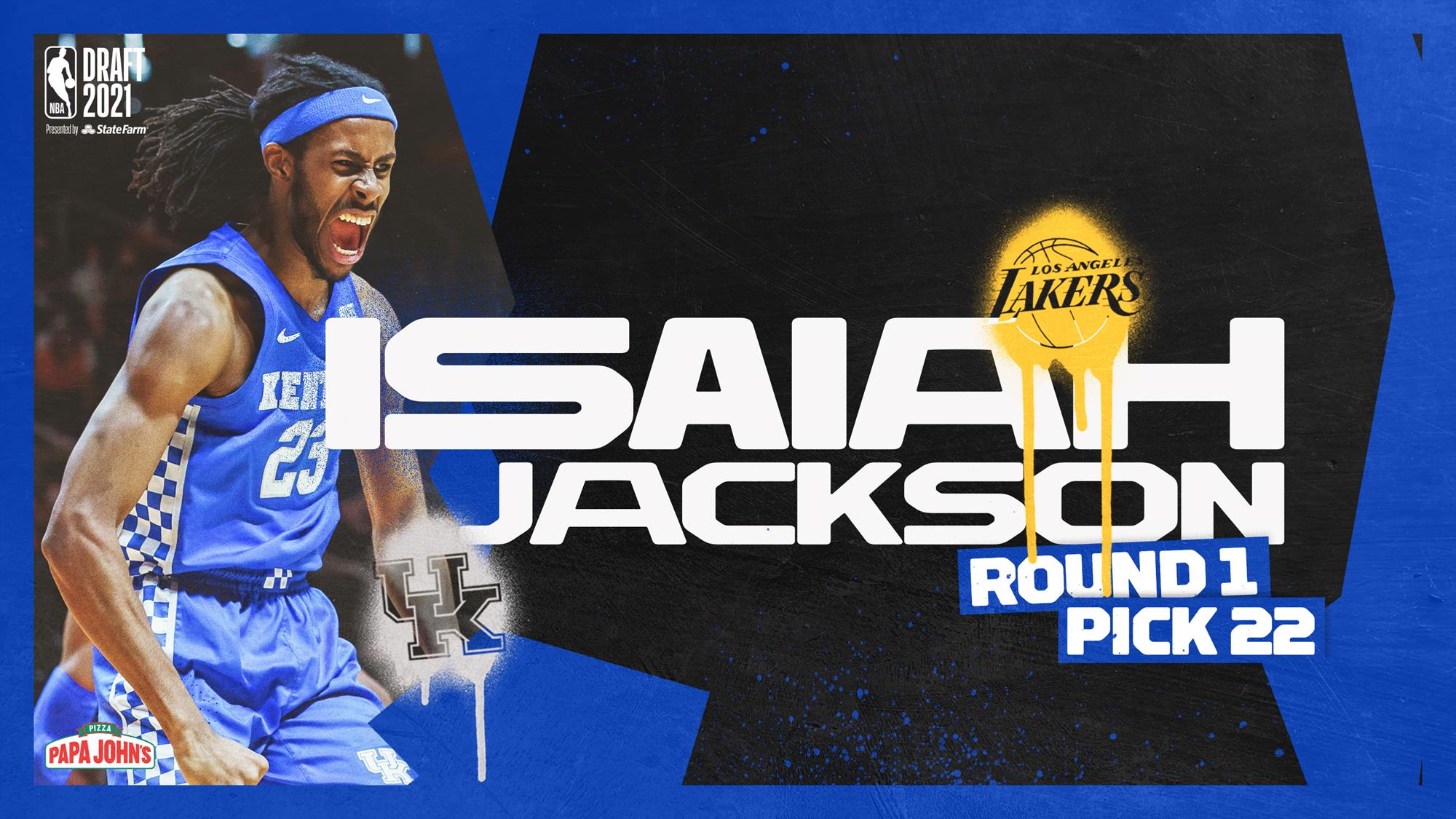 Jackson’s ability and athleticism were evident early in his freshman campaign and he transformed into an All-Southeastern Conference Freshman and Defensive performer by the end of the season.

The freshman forward averaged 8.4 points and 6.6 rebounds in 25 games with 18 starts. Over the last seven outings, he logged 13.3 points and 6.9 boards per game and reached double-figure scoring in all but the last contest. Jackson recorded two double-doubles on the season, both of which came over the last seven games. He shot 63.3% from the floor during that span.

Jackson was an elite shot blocker from the start. He burst onto the national scene in his third career game when he blocked eight shots against No. 7/5 Kansas. It was the most rejections in a game for any Wildcat since Willie Cauley-Stein blocked nine shots against Boise State on Dec. 10, 2013, and it was the most ever by a UK player vs. an Associated Press top-10 opponent in program history.

The Pontiac, Michigan, native swatted 65 shots this past season to lead the nation’s No. 3 shot-blocking team. He led the SEC with 2.6 rejections a game and ranked 15th nationally. Jackson led the Wildcats in blocks in 20 of 25 games and recorded three or more swats in nine outings. The 6-foot-10 forward also induced 19 steals on the season.

Jackson grabbed 12.7 rebounds per 40 minutes, among the best marks during the Calipari era, and recorded a team-high seven double-figure rebounding games. In the second half of a win over LSU, after sitting much of the opening stanza with foul trouble, he hauled in 13 rebounds after halftime. It was the most rebounds by a UK player since Nick Richards hauled in 16 boards vs. Arkansas on Feb. 26, 2019. According to STATS, Jackson became the first player with 15 or more rebounds in fewer than 20 minutes played against a major conference opponent since VMI’s Eric Mann had 17 boards in 19 minutes against South Carolina on Dec. 28, 2000. 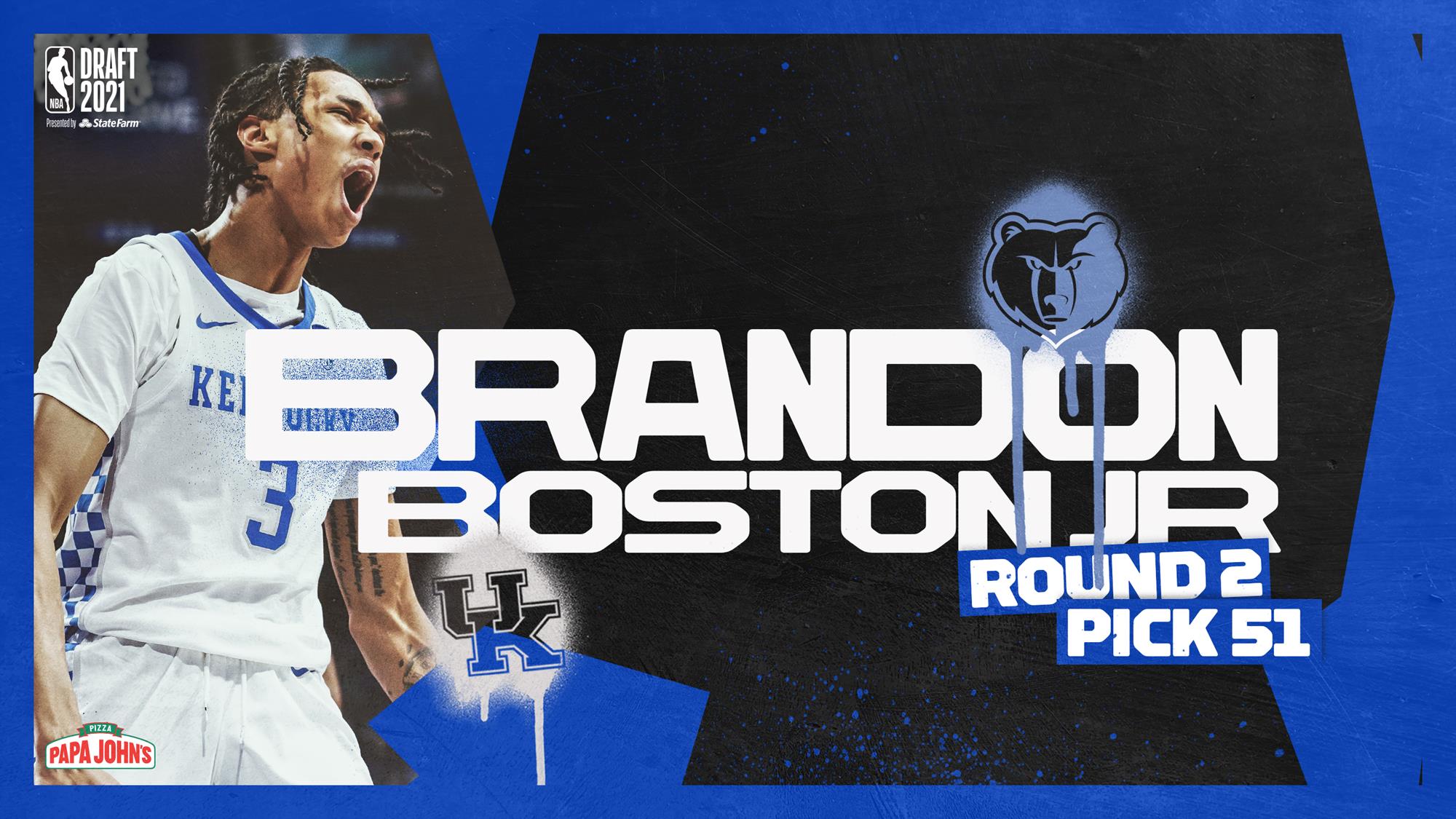 Boston made 24 starts in 25 appearances for the Wildcats last season. He averaged a team-high-tying 11.5 points per game and his 4.5 rebounds per outing led the guards. The Norcross, Georgia, native paced the squad with 33 steals and had six games with three or more swipes.

Known for his ability to score on all three levels, Boston reached double figures in a team-high 17 games and had a pair of 20-point performances. Boston made particular strides from long range as the season wore on, draining 23 3-pointers over the final 12 games.

Boston scored a career-high 21 points with a career-best six 3s in the regular-season finale against South Carolina. He recorded 17 points in back-to-back outings against Arkansas and Auburn. He also posted a career-high four steals in the win over the Tigers. In his return to his home state, Boston scored 18 points at Georgia and followed that with 18 points, six boards, three assists, a block and a steal in the win over LSU.

Boston was the only guard on the team to record a double-double this season with 20 points and a career-best 10 rebounds against Richmond. 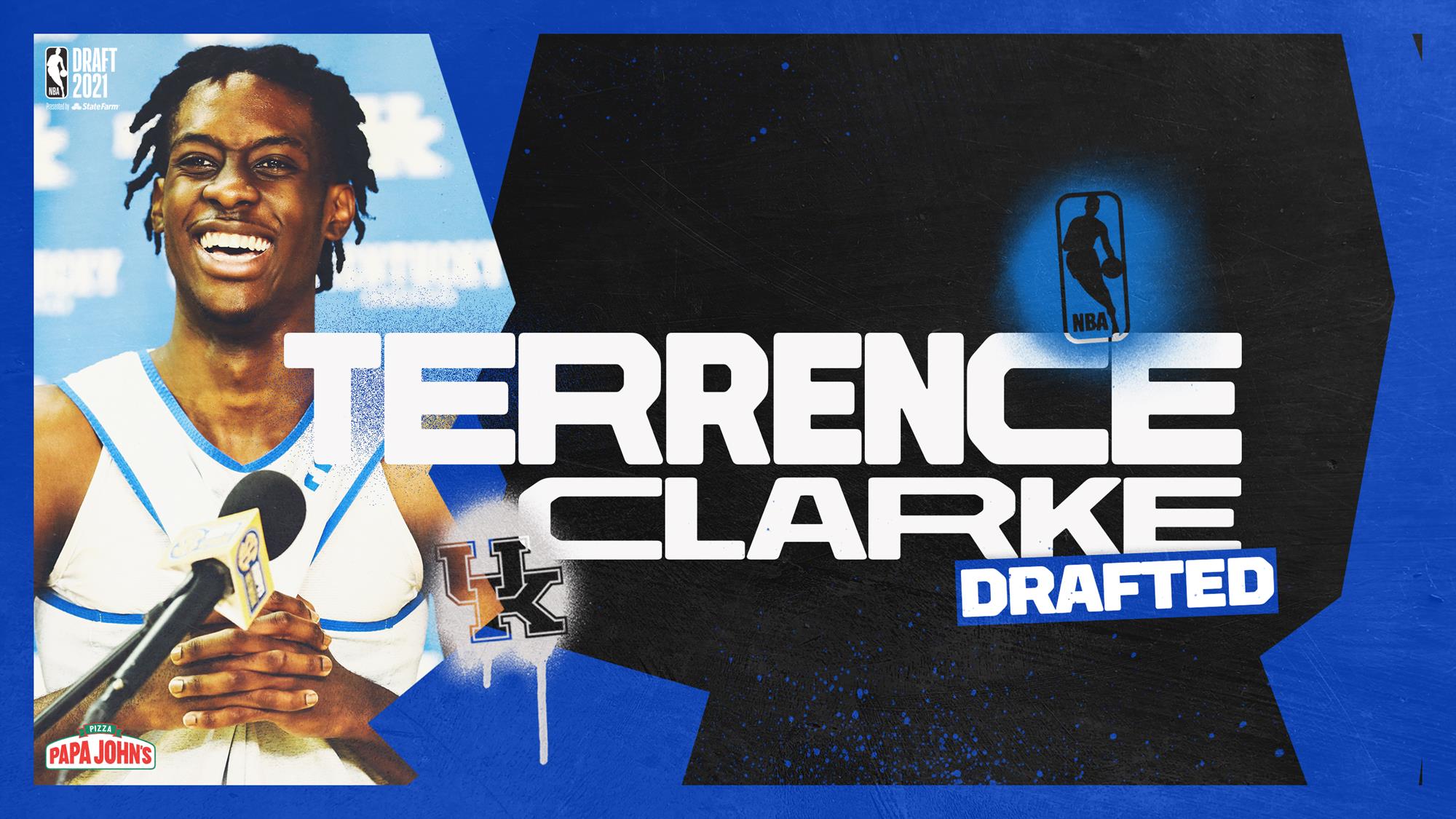 Clarke died on April 22 after sustaining fatal injuries from a car accident in Los Angeles just days after signing with Klutch Sports to pursue his dream of playing in the NBA.

The Boston native was limited to eight games in his lone season with Kentucky in 2020-21 because of a right leg injury. He made six starts and averaged 9.6 points, 2.6 rebounds and 2.0 assists per game.

The 6-foot-7 guard scored in double figures in four of his first five games and was shooting 49.1% prior to the North Carolina game when he suffered his leg injury. Clarke played through the injury vs. UNC and the next game at Louisville before being sidelined for the conference season.

Despite missing more than two months of action, Clarke battled back to provide support and depth for his teammates in the SEC Tournament game vs. Mississippi State.

Clarke’s on-court UK highlights included a 22-point, three-assist game vs. Georgia Tech in early December. He was 9 of 14 from the floor with three 3-pointers. Clarke also scored 15 points and grabbed six rebounds vs. Richmond, posted 14 points with three assists vs. Notre Dame, and made his college debut with 12 points, four assists and three steals in the rout of Morehead State.

Clarke signed with Kentucky as one of the top prospects in the 2020 high school class. A consensus five-star prospect, he was ranked as high as No. 8 in the final Rivals rankings.

He is survived by his parents, Osmine Clarke and Adrian Briggs, and his three siblings, Tatyana Gray, Gavin Clarke and Madison Adrianne.