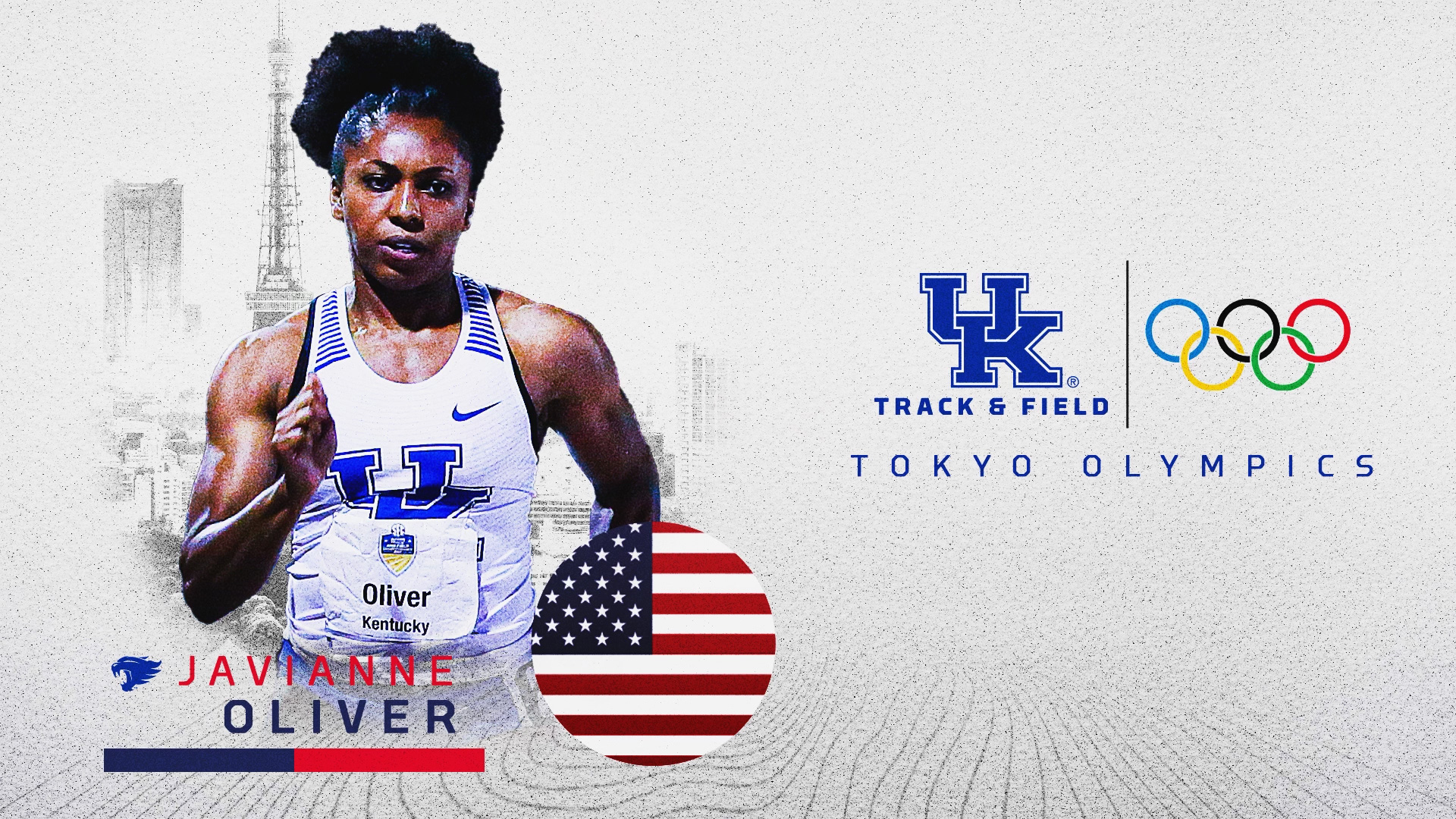 EUGENE, Oregon – Javianne Oliver, who competed for the University of Kentucky from 2015-17, became the first Wildcat to earn a spot on the United States Track and Field Olympic Team on Saturday at Hayward Field in Eugene, Oregon.

Running in the finals of the 100-meter dash finals Saturday night, Oliver got off to a great start and the early lead. She was overtaken near the wire, but her second place finish – timed at 10.99 seconds – earned a ticket to the Tokyo Olympics. Earlier in the evening, she had advanced to the finals by finishing second in the semifinals with a time of 10.83 seconds.

“It’s surreal to put together a full race,” Oliver said. “It came together today and I’m so excited … It went by so fast. All I know was I was running as hard as I could, and it paid off.

“I’m just really grateful to even be here. It’s been a long journey to get here. Reflecting on all the races, I’m just grateful to make it all three (rounds) healthy and to make this team.”

Oliver joined Jasmine Camacho-Quinn (Puerto Rico – 100H) on the list of Wildcat alumni to punch their tickets to Tokyo so far.

Micaela Hazlewood, class of 2019 and coached by Kentucky throws coach Keith McBride, finished second in the discus throw with a personal-record sling of 205’2″/62.54m.  She has yet to meet the Olympic qualifying standard of 63.50m in the event this year, which complicates whether she can make the U.S. Olympic Team.

“In round two I hit a big PR, kind of went after that,” Hazlewood said. “To have a PR today, I can’t complain at all … It’s definitely a bittersweet moment. I need to get that extra 96 centimeters to have that Olympic Standard, but also to be like ‘I hit this, I’m ready, I’m prepared.’ If hitting a personal best, it’s almost like I’m ready to throw the Olympic Standard. I’m ready to do that and I’m capable.

“To compete like this at the Olympic Trials just shows that I’m moving in the right direction. Before this season my PR was only 58.49 so I’ve made big jumps this year. I’m ready to go.”

The World Athletics guidelines allow athletes to chase the standard until June 29, and the 2020 Olympic qualifying standards also afforded athletes ranked highly on the world list this year a chance to qualify without the Olympic Standard, so she still has a window in which to achieve the Olympic Standard and make the U.S. Olympic Team.

Meanwhile, Kendra Harrison, Keaton Daniel and Ethan Shalaway all advanced to the finals in their events.

Harrison ran 12.49 seconds in the first round of the 100-meter hurdles, advancing to Sunday’s semifinals. Harrison, who holds the world record in that event, was elected to the UK Athletics Hall of Fame on Tuesday of this week.

“My mindset is just to come out here and win every round,” Harrison said. “Just think of it as a regular track meet. Don’t put too much pressure on myself and just do what I can do.”

Daniel, currently a redshirt freshman at UK, enjoyed a perfect night in the pole vault qualifying round.  He cleared all four heights on the first attempt, topping out at 18’6.5″/5.65m to move forward to Monday’s finals.

On Sunday, in addition to Harrison in the semifinals – and hopefully finals – of the 100m hurdles, Katy Kunc (Class of 2018) will run in the first round of the 3000m steeplechase.

The 2020 Summer Olympic Games in Tokyo were postponed last year, but are still being known as the 2020 Olympics.

More UK alumni are entered in the meet and will be covered as they compete.

How to qualify for the Olympics
The top three finishers in each event, so long as they have the Olympic qualifying standard which was established by World Athletics months ago, will automatically earn spots on Team USA for the 2020 Summer Olympics to be held in in Tokyo in July-August 2021.

Olympic team trials and their equivalent meetings are taking place across the world in the coming days and weeks.