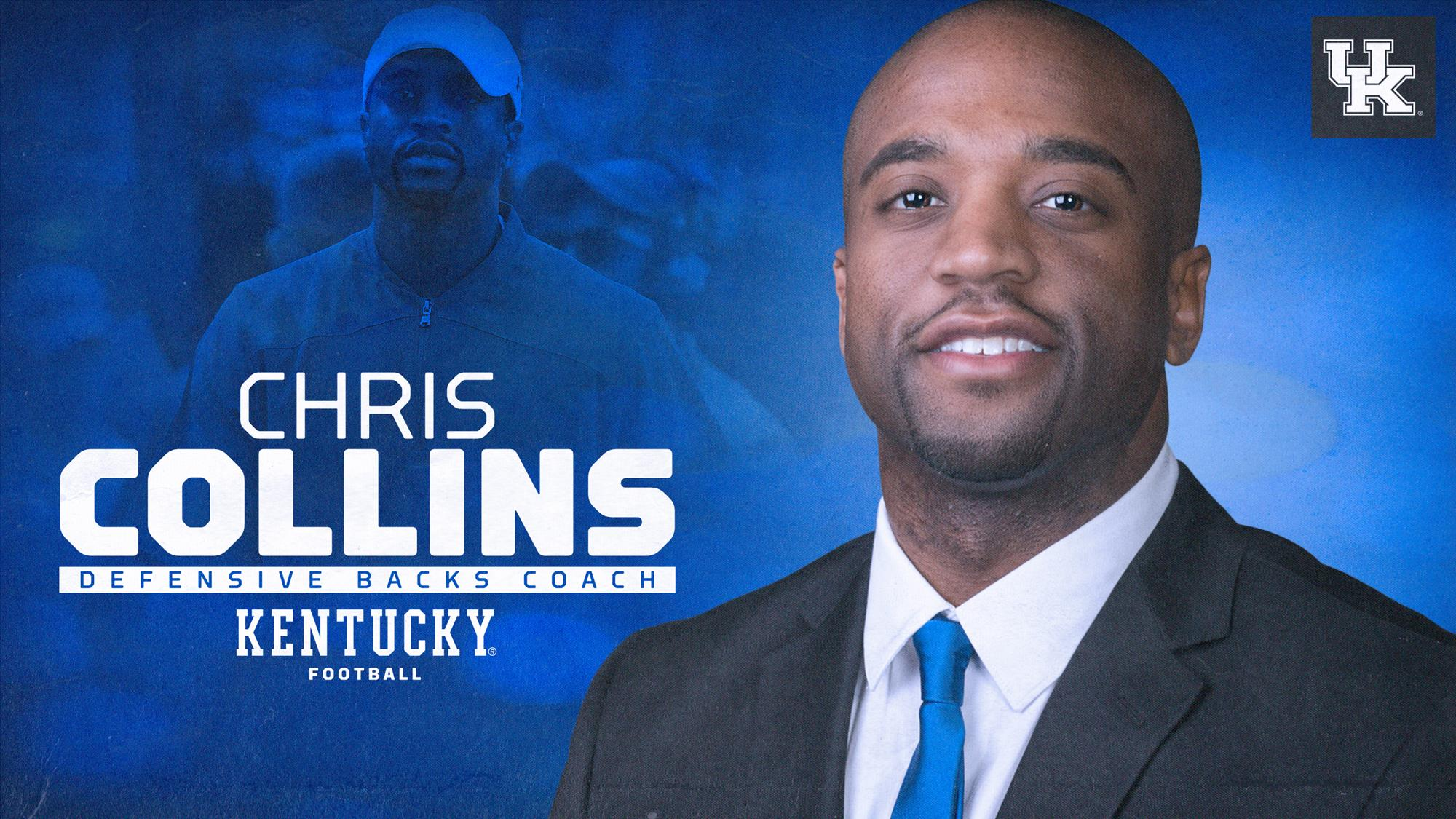 “Going through the hiring process for this job I talked to several candidates but each time I talked to Chris I came away more and more impressed with him,” Stoops said “He brings great energy and enthusiasm to the staff on the field and as a recruiter. We are very excited to have him on board.”

Collins comes to Kentucky after four seasons (2017-20) as the safeties coach at Georgia State, helping the Panthers advance to a bowl game in three of his four seasons.

“My family and I are extremely blessed and excited to be a part of the Kentucky football family,” Collins said. “On top of Kentucky being an elite level program known for developing talent, this interview process has shown me a tremendous amount about Coach Stoops, Coach (Brad) White and the rest of the staff. When they say family first, they really mean it. During this interview process my wife and I were having our first child. Coach Stoops readjusted his schedule to accommodate my time with my wife and son. That showed me everything that I needed to know about the men I would be working with.

“Coach Stoops’ knowledge is second to none when it comes to defensive backs. I’m excited to learn and work with him, Coach White and the rest of the staff to continue to elevate this defense.”

In his first year at GSU in 2017, he helped coach a defensive unit that set the school’s season record for fewest points allowed per game (24.75), while tutoring All-Sun Belt Conference safety Bryan Williams, who tied the school record for interceptions in a season with four. The Panthers finished 7-5 overall with a 27-17 win over Western Kentucky in the AutoNation Cure Bowl.

In 2019, the Panthers again went 7-5 overall with an appearance in the Nova Home Loans Arizona Bowl.
Along with coaching the safeties, he also took on the added responsibility of recruiting coordinator, helping GSU sign a 2020 recruiting class that had the highest average player ranking in program history, according to 247Sports.

Last season, despite the challenges of navigating a season during COVID-19, Collins helped lead the Panthers to a 6-4 overall record which included a 39-21 win over Western Kentucky in the LendingTree Bowl. Redshirt freshman safety Antavious Lane shined under Collins’ tutelage, also tying the school record for interceptions in a season with four in just eight games played. Lane went on to earn second-team All-Sun Belt Conference honors and was a member of the Associated Press All-Bowl team after totaling five tackles and an interception, the first pick thrown by WKU QB Tyrell Pigrome all season after 278 attempts. He helped the GSU defense allow just 284 total yards in the game.

Before Georgia State, Collins coached the linebackers at his alma mater, Western Carolina, in 2016. He was an integral part in helping Tyson Dickson earn second-team All-Southern Conference honors by the league’s head coaches with 86 tackles.

He spent the 2015 season as a defensive graduate assistant coach at Appalachian State, helping the Mountaineers to an 11-2 record and a victory over Ohio in the Raycom Media Camellia Bowl. He worked closely with all-conference linebacker Devan Stringer.

From 2013-14, he served as the secondary coach and special teams coordinator at Catawba College in Salisbury, North Carolina, while also serving as the academic coordinator for the NCAA Division II program. At Catawba, Collins coached All-America defensive back L.J. McCray, who went on to play three seasons in the NFL after signing as a free agent, as well as two all-conference selections in defensive back Mark McDaniel and punter Caleb Berry.

Collins, 32, was a four-year letter winner and two-year captain as a safety and outside linebacker at Western Carolina from 2006-09. He recorded 303 tackles during his collegiate career, including 109 as a senior in 2009, when he earned second-team All-Southern Conference recognition. He finished his career with 19 tackles for loss (including 12.5 as a senior), nine forced fumbles (including a SoCon-best six as a junior) and five pass breakups.

A three-time member of the SoCon’s academic honor roll, Collins graduated from Western Carolina in 2010 with a degree in construction management and a minor in business administration.

Following the conclusion of his playing career, he spent three seasons on WCU’s coaching staff, first as a student assistant in 2010 and as a defensive assistant in 2011-12, working primarily with the Catamounts’ linebackers and defensive backs. In 2010, he helped tutor freshman defensive back Randy Pressely, who was named to the SoCon Coaches’ All-Freshman Team.

The High Point, North Carolina native, graduated from T.W. Andrews High School. He is married to the former Kiara Crutchfield of Greensboro, N.C. The couple has one son, Christopher Collins III.