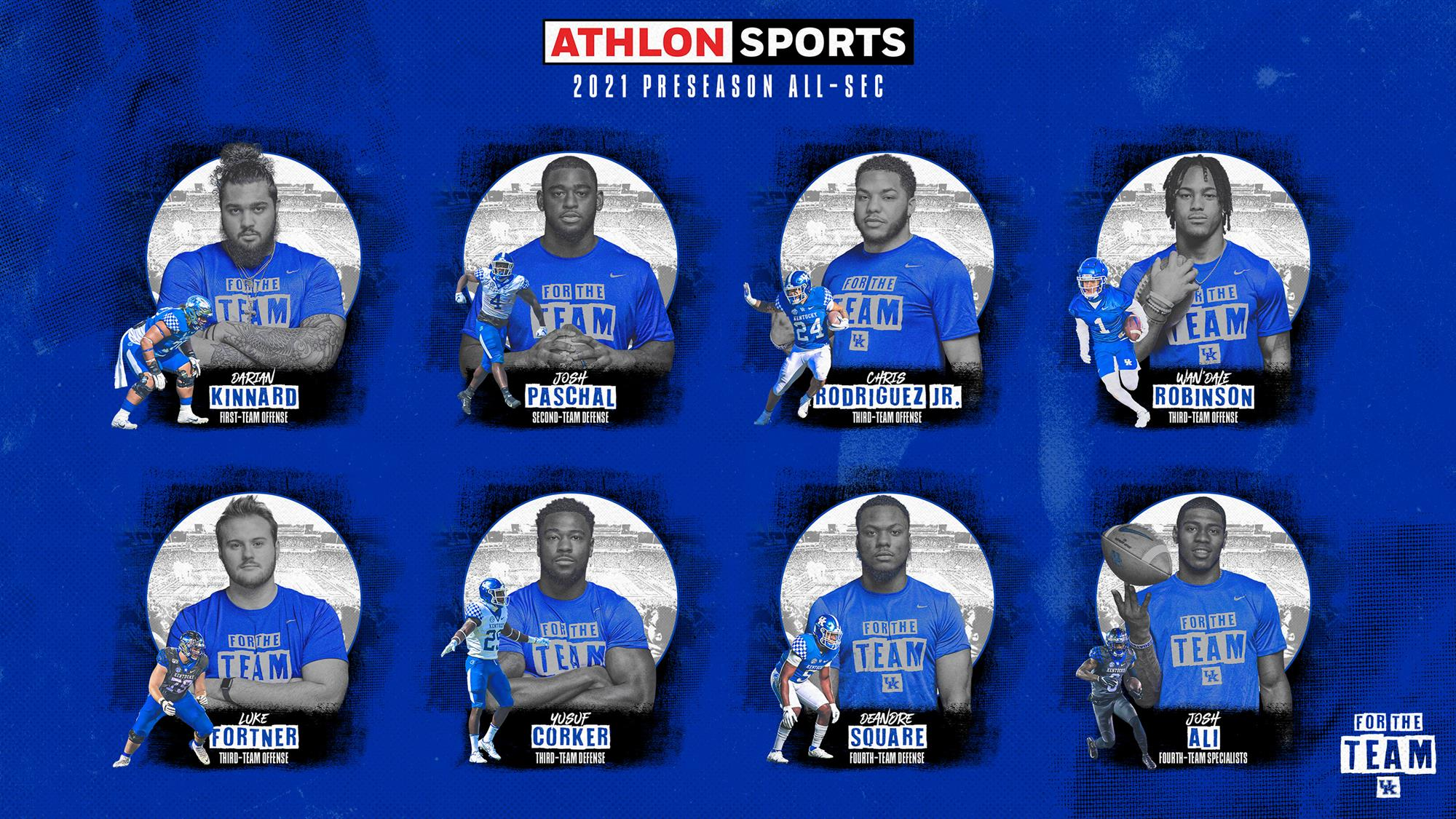 Eight University of Kentucky football players have earned a spot on the 2021 Athlon Sports Preseason All-Southeastern Conference teams it was announced today as four offensive players, three defensive players and one specialist were recognized.

Kentucky’s eight preseason selections tied for the third-most with Auburn, Ole Miss and Mississippi State. Alabama and Georgia led with 15 each, while Texas A&M and LSU had nine apiece.

Kinnard, a 6-foot-5, 338-pound offensive lineman from Knoxville, Tennessee, was graded by Pro Football Focus as college football’s top run-blocking tackle for 2021. The senior has played in 33 career games with 26 consecutive starts and in 2020, he graded at 88 percent in 10 regular season games with 40 knockdown blocks and 138 blocks at the point of attack. He also was a candidate for the Outland Trophy, give to college football’s best interior lineman.

Paschal, a 6-3, 275-pounder from Prince George’s County, Maryland, moved from linebacker to defensive end prior to the 2020 season and immediately became a stalwart on the line. He was named fourth-team All-SEC by Phil Steele’s Football Magazine and All-SEC Honorable Mention by Pro Football Focus in 2020 after totaling 32 tackles, 6.5 tackles for loss, one sack, one quarterback hurry and one interception in 11 games. As a leader on and off the field, Paschal has been elected team captain twice (2019 and 2020) and has been UK football’s representative for the NCAA’s Student-Athlete Advisory Committee and the SEC Leadership Council the past two seasons. He also was named a semifinalist for the Jason Witten Collegiate Man of the Year award last season and was a SEC Fall Academic Honor Roll member.

Paschal graduated in May of 2021 with a degree in family science and a minor in health promotion and is currently working on a second degree in communication.

Rodriguez, a 5-11, 224-pounder from McDonough, Georgia, led the Cats in rushing in 2020 with 785 yards and 11 touchdowns despite missing two games due to COVID-19 protocols. The power back had four 100-yard rushing games, including three of the final four games for which he was available, and was nearly impossible to bring down. He totaled 105 consecutive carries without being tackled behind the line of scrimmage and gained positive yardage on 116 of his 119 total attempts. He delivered a career-best 149 yards vs. Vanderbilt on Nov. 14 and led the SEC in yards per attempt at 6.6. Overall, he ranked fifth in the SEC in rushing yards per game (87.2), earning him first-team All-SEC accolades by Pro Football Focus and fourth-team All-SEC honors from Phil Steele. Rodriguez currently has 1,361 career rushing yards, good for 27th place in school history.

Robinson, a 5-10, 183-pound all-purpose player from Frankfort, Kentucky, transferred back to his home-state school in 2021 after playing two seasons at Nebraska. He will be eligible to play immediately after the new NCAA transfer legislation passed which allows athletes in all sports to transfer one time without having to sit out.

At Nebraska last season, Robinson led the Huskers with 51 catches and 461 receiving yards despite playing only eight games and splitting duties at running back. He was fourth on the team with 240 rushing yards and led Nebraska with 696 all-purpose yards. He was on the Paul Hornung Award Watch List and he earned honorable-mention All-Big Ten honors from the conference coaches. Robinson ranked fourth in the Big Ten and 23rd nationally with 6.4 receptions per game, the fourth-highest average in the country for an underclassman.

Robinson made a name for himself nationally as a freshman in 2019, catching 40 passes for 443 yards and two touchdowns while rushing for 340 yards and three scores. The 40 catches and 443 receiving yards were the most by any true freshman in Nebraska history. He also totaled 1,029 all-purpose yards as a true freshman, which ranked second on the team and was the third-highest total ever by a Husker true freshman.

Because of his versatility and play-making ability, he was named a second-team freshman All-American, an honorable-mention All-Big Ten selection, and was a two-time Big Ten Freshman of the Week. He was also one of four national finalists for the Paul Hornung Award, given to the nation’s most versatile player.

Fortner, a four-year letter winner from Sylvania, Ohio, returns to the “Big Blue Wall” after taking advantage of the NCAA’s extra year of eligibility due to COVID-19. He enters the 2021 season having seen action in 42 career games with 23 consecutive starts at right guard. In 2020, he graded out at 82.9 percent in 10 games played with 26 knockdowns and 146 blocks at the point of attack.

Corker, a 6-0, 204-pounder from McDonough, Georgia, has played in 37 career games with 24 straight starting nods at safety. As a junior in 2020, he finished second on the team in tackles (77) behind NFL first-round draft pick Jamin Davis. He also added 2.5 tackles for loss, two interceptions, two pass breakups and a forced fumble, earning All-SEC Second Team honors by Pro Football Focus and Phil Steele.

Off the field, Corker was named to the Dean’s List and the SEC Fall Academic Honor Roll in 2020. He graduated in May with a degree in economics and is currently working on a second degree in communication.

Square, a 6-1, 221-pound linebacker from Detroit, has played in 36 career games with 22 starting assignments, including 10 starts as a junior last season.  The team captain in 2020 was third on the team in total tackles with 60, second on the team with four quarterback hurries and also charted 2.5 tackles for loss, a pass breakup and a fumble recovery.

Ali, a 6-0, 190-pound wide receiver and punt returner from Hollywood, Florida, is another four-year letter winner taking advantage of the NCAA’s extra year of eligibility due to COVID-19. He has played in 45 career games, starting 24 in a row. As a specialist, Ali has been UK’s top punt returner the last two seasons, combining for 20 punt returns for 150 yards. 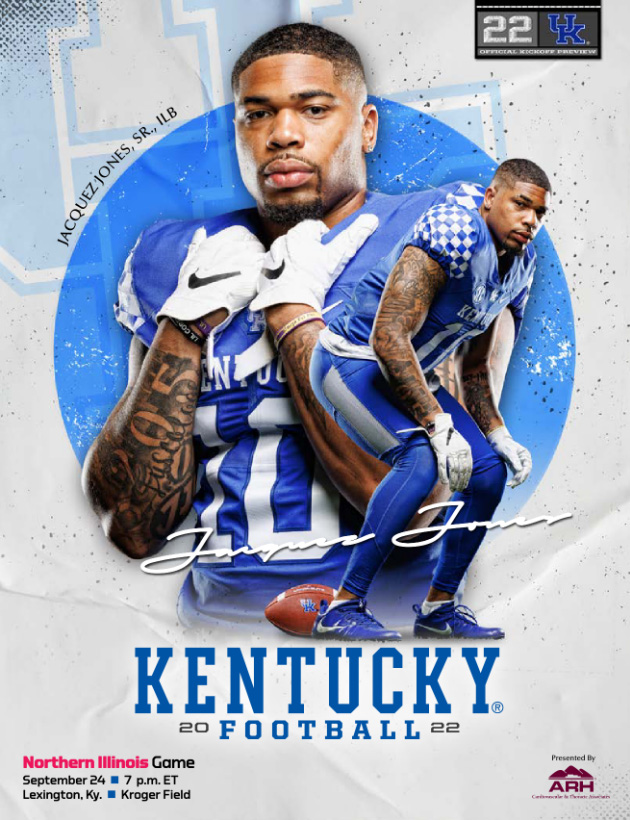 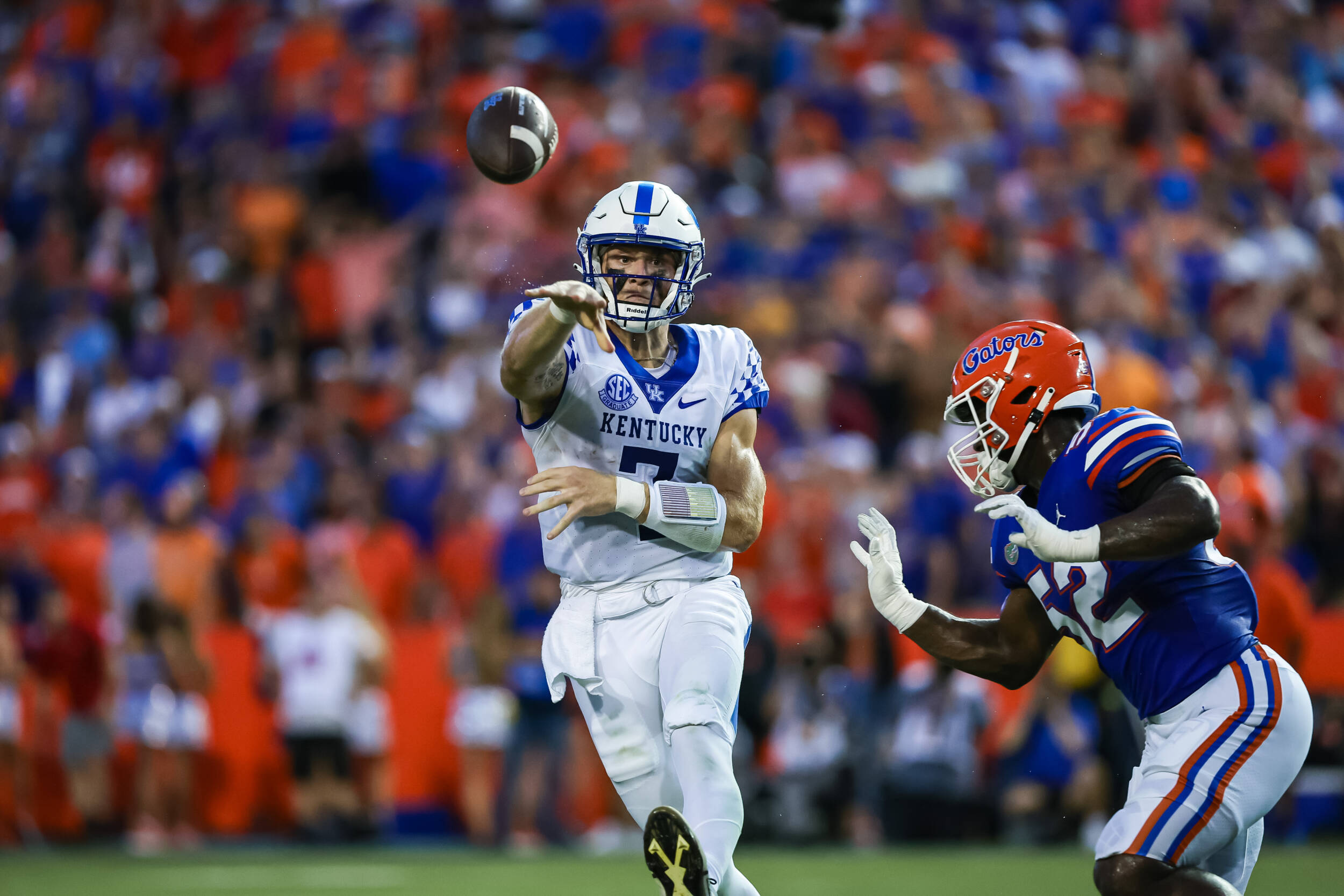