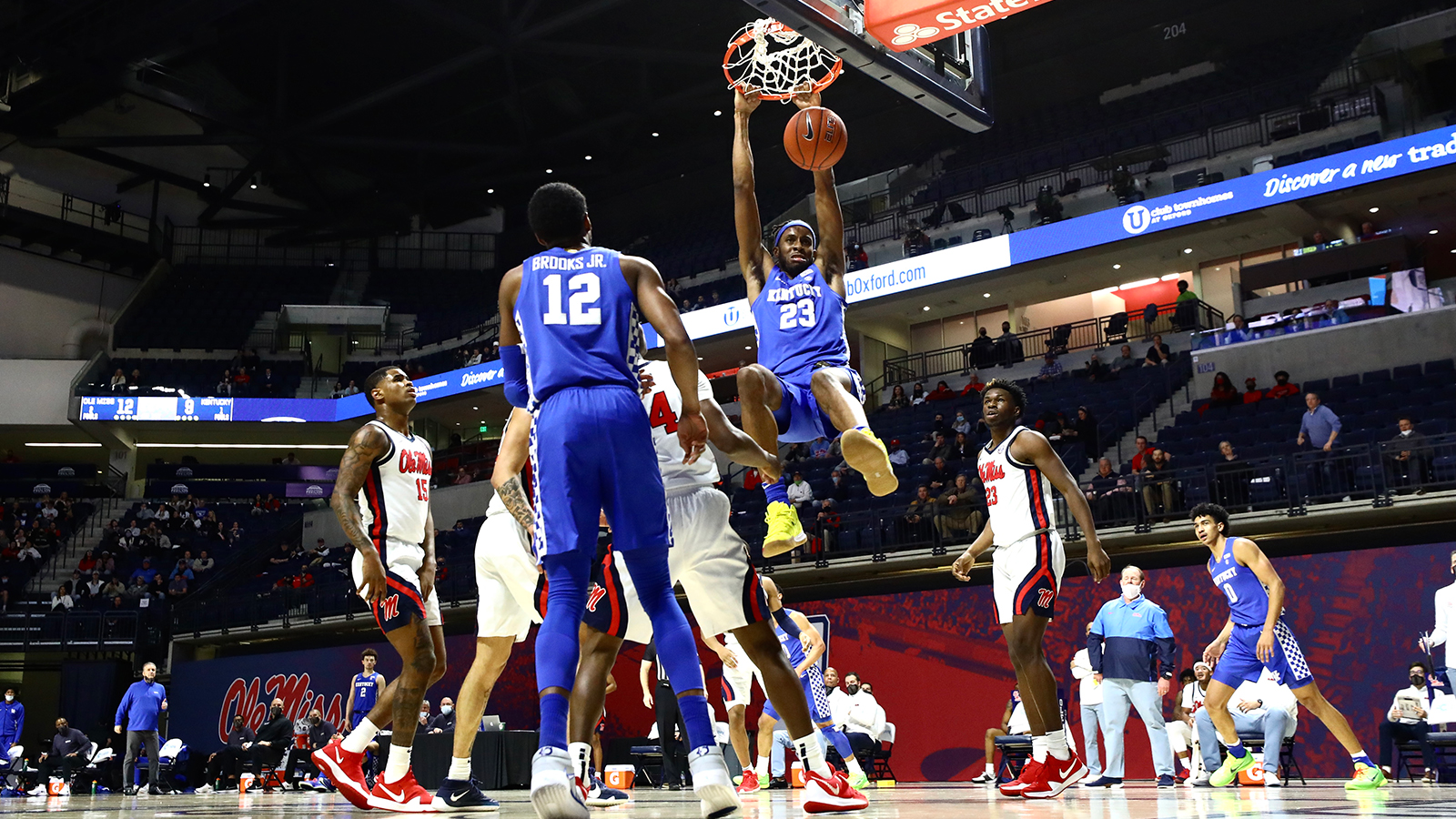 As the Wildcats plugged one hole Tuesday (fewer turnovers and more assists), another started leaking.

“How about we have 16 assists and seven turnovers? What’s that usually mean for us?” Calipari said. “Yeah, (a win). Not when you get outrebounded.

“It’s just disappointing because all I keep saying is, look, we’ve just got to worry about us being our best. Well, you’ve got guys who are trying to be cute. I don’t know. I don’t have an answer. When it’s you and that guy and he throws you to the floor or you’re not ready to battle or you don’t hit first, you’re not going to get the ball.”

Running short on answers, adjustments and “tweaks,” one thing is now certain: Kentucky will have to win four games in four days at next week’s SEC Tournament in Nashville, Tennessee, if it hopes to salvage the season and earn an automatic berth into the NCAA Tournament.

Seeding for the SEC Tournament is still working itself out, but the Wildcats were officially eliminated from the coveted double bye, an advantage UK has earned in every season since the tournament expanded in 2013. Even though they have dominated the league tournament with 31 titles, the Wildcats haven’t won the conference tournament by winning four games since 1952.

With the loss at Ole Miss, Kentucky was not only guaranteed a Thursday date in the SEC Tournament, UK also clinched its first losing season in the SEC since the 1988-89 season.

“It’s winding down,” Calipari said of the big picture of the season. “We’re up against it now.”

Keion Brooks Jr. broke out of a three-game 6-for-21 field-goal slump with 16 points on 8-of-14 shooting for Kentucky. Olivier Sarr added 15 points, Davion Mintz dished out a career-high-tying eight assists in addition to 10 points, and Isaiah Jackson posted 13 points and three blocks before fouling out for the third time in six games.

But the Wildcats were unable to hold on to any momentum they thought they had generated just a week and a half ago with a three-game winning streak.

In addition to Kentucky’s worst rebounding margin of the season, Ole Miss made 8 of 13 from behind the arc. The Rebels entered the game making just 5.1 3-pointers a game on 28.5% shooting.

And at the free-throw line, where UK had made 66 of its last 74 attempts (89.2%) over the previous three games, the Wildcats made just 15 of 25 in this one (60%), missing several key opportunities down the stretch.

In a season to forget for Calipari and his bunch, it feels like if it’s not one thing going wrong, it’s another.

“We were right on the edge of pushing over the edge to go the right way and be right there and do some crazy stuff and then they revert back to what is easier and what they’d rather do,” Calipari said. “Normally my teams understand, ‘OK, I’ve got it, I see what he’s saying, I’m hearing him now and this is the way I play.’ And then they go on from here and they’ve learned how to fight, how to make it personal with another player. ‘It’s you and me’. And they learn all that here.

Calling it “another game we could win,” Calipari’s group had its chances.

After a 5-for-23 start from the floor, Kentucky made its next eight shots and went into the locker room down by just three, what felt like a win after getting punished on the boards early in the game.

The Wildcats took advantage of the opportunity and surged into the lead with an early 8-0 run. Kentucky took its biggest lead of the game at 46-40 after a 7-0 spurt, but that’s where things went south.

Ole Miss answered with a 13-4 stretch to regain the lead midway through the second half and never looked back. UK tried to hang close late, but the Wildcats’ season-long woes in the final four minutes of games persisted as they went more than three minutes without a field goal when the game hung in the balance.

“They wanted it more than us at the end of the day,” Brooks said. “They were more physical at the point of attack, kind of knocking us out of the way a little bit. It just came down to us against you, who’s going to get the ball. And they got a majority of them, if not all of them.”

It was the 11th time in their 15 losses Kentucky led at some point in the second half.

What has disappointed a visibly frustrated Calipari the most is that he felt like his team had finally broken through following the win at previously ranked Tennessee.

As Kentucky gets ready for its final regular-season game of 2020-21 – on Saturday vs. South Carolina in a make-up game from a COVID-19 postponement – Brooks said his teammates will not give up.