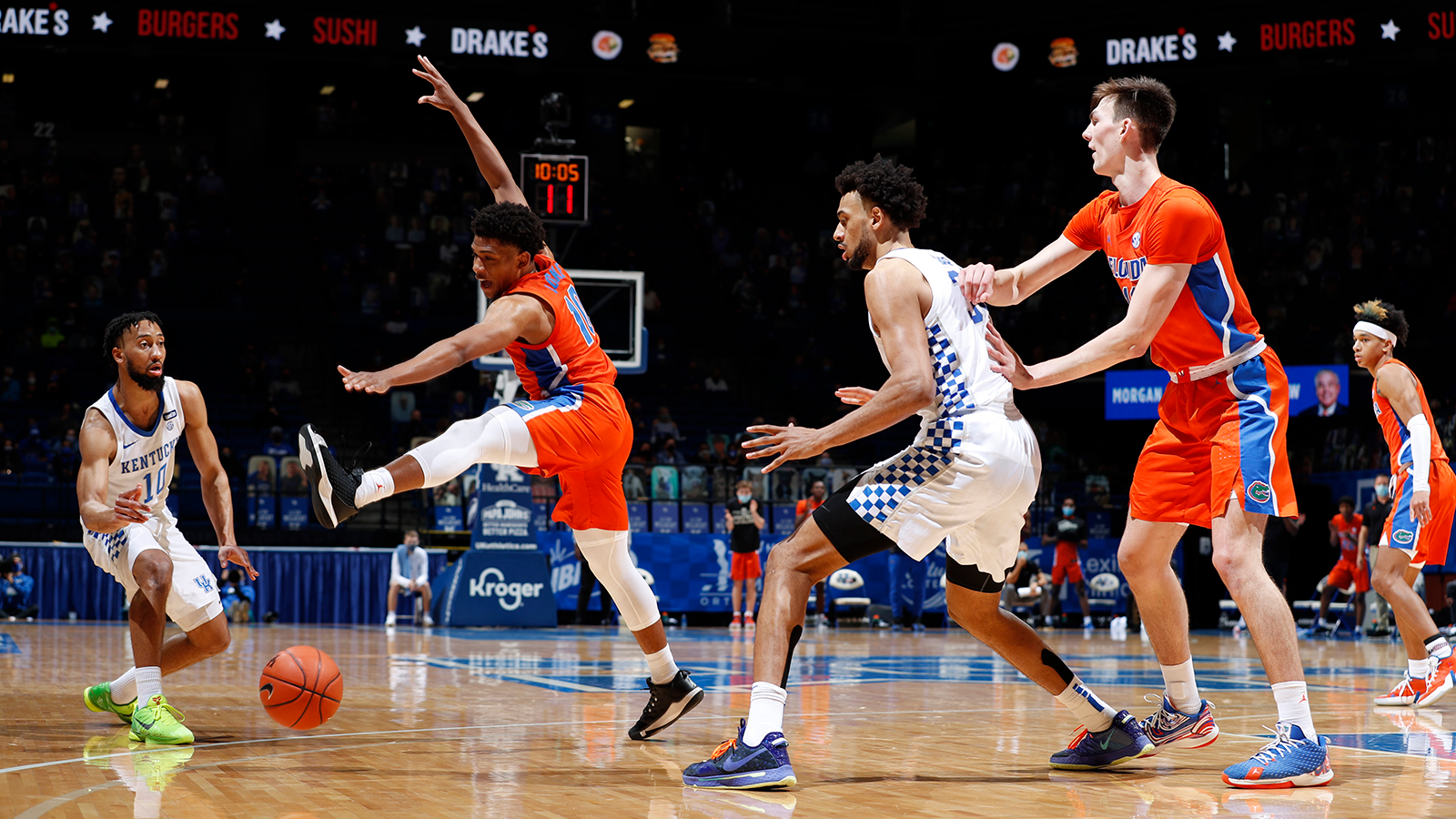 LEXINGTON, Ky. – Riding high after three straight wins and what appeared to be a breakthrough double-digit victory at rival Tennessee last week, Kentucky came crashing down to earth Saturday with a disappointing 71-67 loss to Florida.

All the issues that had plagued the Wildcats in a historically difficult season – closing out games in the last four minutes, finding an offensive rhythm, not turning the ball over – all came roaring back just as Kentucky tried to build momentum for a late-season push to the postseason.

They were also assured of their first sub-.500 record at Rupp Arena in the 45-season history of the venue and the program’s first at home since the 1926-27 season.

It was a bitter taste for a team that appeared to finally be clicking as it celebrated graduate Davion Mintz and seniors Olivier Sarr and Riley Welch on Senior Day.

“Guys got tentative,” UK head coach John Calipari said. “We had some bad play, individual bad play today, and that happens. They are not machines. They are not robots. We had a couple guys play one of their worst games, no energy. And you know, we still had our chance to win.”

Kentucky routed Florida (13-6, 9-5 SEC) in the first contest in Gainesville, Florida, in early January, 76-58. Early on, it looked like Saturday could be a repeat as the Wildcats raced to a 26-16 lead, but Florida coach Mike White went to a zone that stalled the UK offense.

Calipari said it was that zone – not a week off following the cancellation of the Tuesday game vs. Texas A&M due to COVID-19 issues with the Aggies – that ended Kentucky’s modest three-game winning streak.

“That got us out of sync,” he said. “It wasn’t taking a couple days off. I mean, I don’t believe that. I believe that we had three great days of practice. We had a great shootaround this morning. (Florida) went zone, we got confused.”

It marked only the fifth time in the series history that UK and Florida split the regular-season series with road victories.

Tre Mann led the Gators with 21 points and eight rebounds. Colin Castleton pitched in with 14 points. Florida shot 52.% for the game, only the second time a Kentucky opponent has made more than half its field-goal attempts.

Mintz continued his strong play with a career-high-tying 21 points. He is averaging 18.0 points over the last three games.

All the boxes Kentucky thought it had finally checked off in recent weeks re-emerged in cruel but fitting fashion for the 2020-21 season.

After scoring at least 80 points in three of the previous four games – the lone exception being a still-efficient 70-point day in the upset of No. 19/20 Tennessee – UK mustered just 67 points in this one on 39.6% shooting.

The signature Kentucky scoring droughts that cost UK in so many close games earlier this season popped back up on Saturday. After a Mintz 3-pointer at the 13:59 mark of the first half, Kentucky made just one field goal until the 50-second mark. At one point, UK went more than five and a half minutes without attempting a shot because of turnovers and free throws.

“We’re a better team when we are running the floor,” Toppin said. “They were kind of staying compacted and we couldn’t get into the middle of the paint, so that was making it hard for us. We couldn’t figure out how to penetrate the defense, and that’s what affected us.”

Then there were the turnovers. After four straight games with a positive assist-to-turnover ratio, UK dished out just seven assists in this one with 15 turnovers.

Three turnovers after UK had built that 26-16 lead midway through the first half sparked an 8-0 Florida run. The game, which featured 14 lead changes and nine ties, would be close the rest of the way and paved the way for another heartbreaking ending.

Despite a sluggish second half, Kentucky took a 63-62 lead with 3:46 left when Devin Askew threw it off the backboard for a Toppin dunk. But as has been the case so often this season, the last four minutes did not belong to the Wildcats.

Florida answered with seven of the next nine points. UK, which had found its stroke from long range in recent games with a combined 40 3-pointers over the previous four, missed two key 3-pointers down the stretch. The Wildcats were 1 for 11 in the second half from behind the arc and 9 for 27 for the game.

“The disappointing thing is this team fought to get themselves in a good position, in a good position that something good could happen for us, and we kind of just had a couple guys not show up,” Calipari said. “Like, what? What? Was it anxiety that wore you out, the anxiety of the game? The anxiety of worrying about the game? I don’t know. But we weren’t the same team today.”

Kentucky will close out the regular season at Ole Miss on Tuesday and host South Carolina next weekend to make up the previously postponed Dec. 29 matchup.

Toppin said the Wildcats are “desperate” at this point, but Sarr – whose parents surprised him at Senior Day by watching the ceremony virtually from France – said it’s important UK does not let the one-game step back get in the way of the momentum it was building for the final leg of the season.

“It’s one game,” Sarr said. “We’ve still got a lot to prove and a lot to learn. We had a lot of mistakes. We’re going to take it one game at a time and make sure that we’re not taking two, three steps ahead and just focus in on the present moment.”

Said Calipari: “Back to the drawing board.”