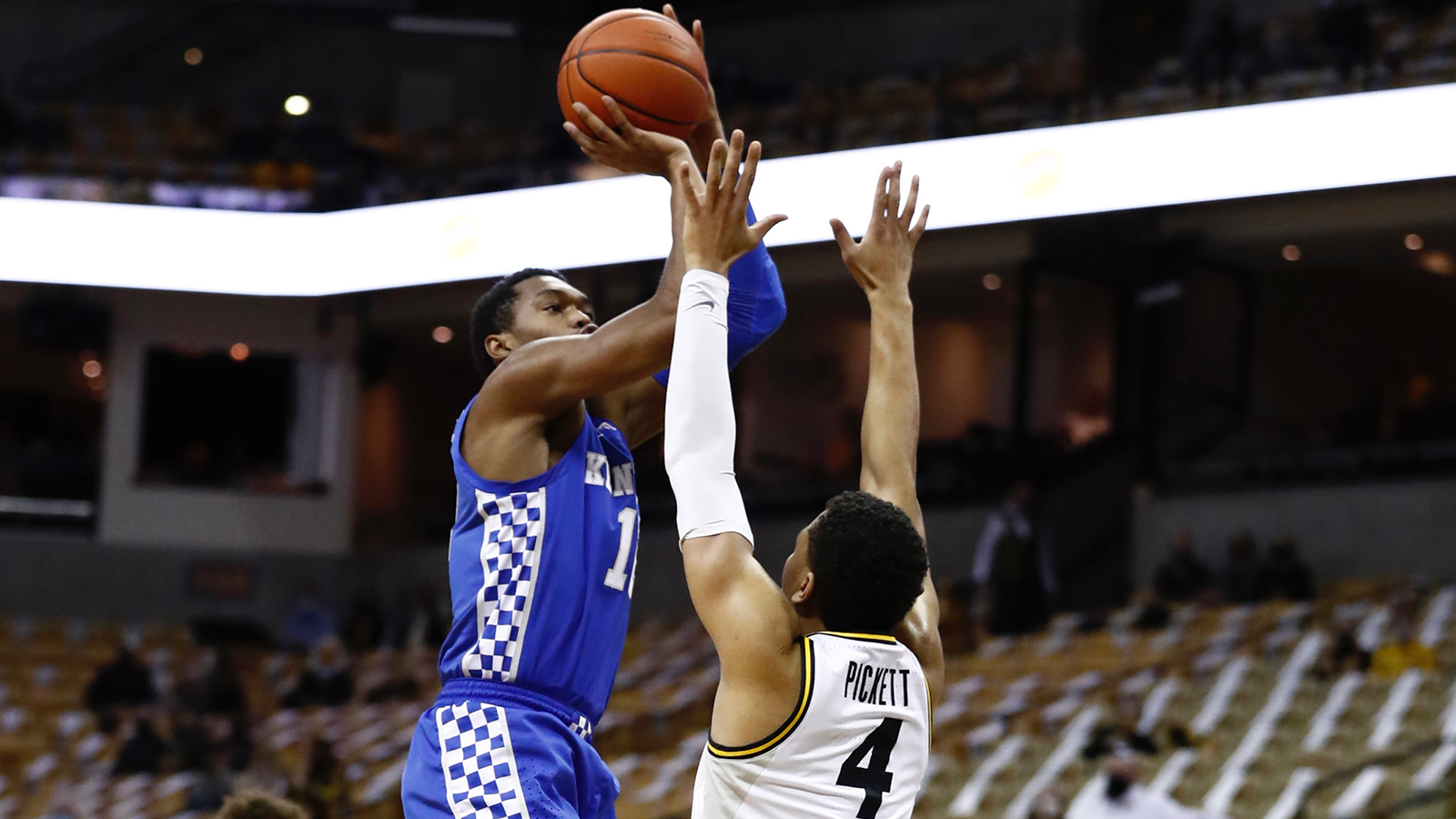 Kentucky Falls Short at No. 18 Missouri

COLUMBIA, Mo. – The Kentucky Wildcats wanted another opportunity to right their late-game woes and they had their chance Wednesday night at Missouri with a gritty comeback.

Coming out of the final media timeout after one of its most complete halves of the season, UK found itself down 68-65 with a prime opportunity to beat its first ranked opponent of the 2020-21 campaign.

Six straight Missouri points later, the reboot John Calipari was hoping for after a week off because of a COVID-19 related pause turned out to be a repeat of UK’s season-long nightmares.

The final at Mizzou Arena: Missouri 75, Kentucky 70. The Wildcats, now 5-11 on the season and 4-5 in Southeastern Conference play, lost for the fifth time in the last six games after starting the league slate 3-0. This one had a familiar heartbreaking feel when UK faltered late in the closing minutes.

Dru Smith scored a season-high 26 points, Xavier Pinson added 14 and Missouri held off a charge by a Kentucky team that finally combined its consistently stingy defense with an efficient offensive second half.

Missouri (12-3, 5-3 SEC) hit five free throws over the final 2:46 while UK turned it over on its first two offensive possessions out of the final media timeout.

Davion Mintz, who was responsible for one of the miscues with an off-target pass to Isaiah Jackson on a lob, took the loss especially hard even though he – with a team-high 18 points – was one of the main reasons Kentucky had a chance in the first place.

“I got one of the highest jumpers in the country; I threw it a little too short to him,” Mintz said. “But that type of stuff was eyes on the point guards and I take full responsibility for that. And you can’t have that in the last four minutes. We can’t have that. You’re going to make mistakes when you’re playing aggressive and trying to make things work and figuring out, but at some point, it’s just unacceptable.”

Mintz made the final of his season-high-tying four 3-pointers with 1:17 left to keep UK in the game.

Jeremiah Tilmon missed both free throws at the other end, setting up a play Calipari drew out a 30-second timeout before the free-throw attempts. Forward Keion Brooks Jr., who had made two 3-pointers in the first half, had a great look from straightaway but came up short from behind the arc.

“It was the shot we wanted,” Calipari said.

The Wildcats did many of the things they needed to do to upset Missouri.

Kentucky weathered the Tigers’ seven first-half 3-pointers and quickly erased most of a 13-point second half deficit with six second-half treys. The Wildcats made nine for the game, their most from behind the arc this season in a regulation game. UK also shot 59.3% from the floor in the second half.

Defensively, Kentucky limited Missouri to just eight second-half field goals and 39.3% shooting for the game. It was the fifth straight game the Wildcats have held the opposition to less than 40% from the field.

But the Wildcats have won just one time during that dominant defensive stretch and are 4-5 this season when limiting the opponent to 40% or less. UK entered the season 202-19 under Calipari under that scenario.

“We defended,” Calipari said. “We just, again, 17 turnovers. You’re not going to win a game like this.”

Those 17 turnovers led to 19 Missouri points and spoiled a balanced, albeit undermanned, attack.

With Jacob Toppin (illness unrelated to COVID-19), Terrence Clarke (right leg injury) and assistant coach Joel Justus all remaining in Lexington, UK got a number of solid contributions from the rest of the cast.

Even at 5-11, Mintz said he is not ready to concede their postseason chances.

“The reason I feel optimistic is because no one has at this point accepted losing,” Mintz said. “As much as it has happened already, people are still upset. We’re all still not happy about it and just moving on with our day we still talk about it and we still have guys and coaches that are trying to make the efforts and do everything we can to put it in the right direction.”