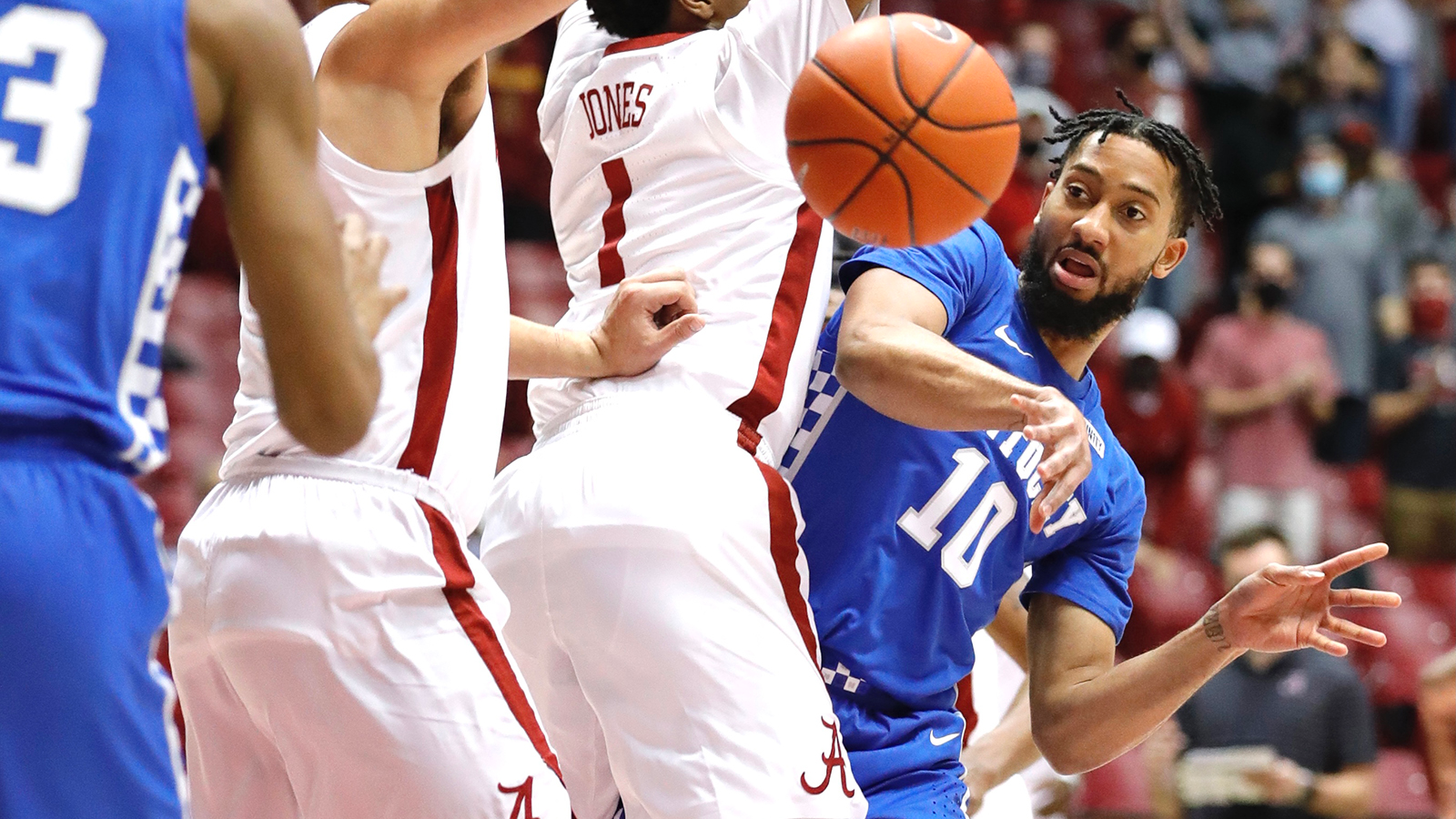 Cats Give Big Effort But Fall at Alabama

TUSCALOOSA, Ala. – If the definition of insanity is doing the same thing over and over again and expecting a different result, it’s easy to understand why John Calipari was frustrated in his postgame news conference after watching his team unfold in the final minutes of a 70-59 loss at No. 9/8 Alabama.

Repeating the same script that has doomed the Wildcats time and time again this season, Kentucky had its chances to win a game but faltered late when the stakes were at their highest.

“The last three minutes, dudes backed away,” Calipari said. “Playing – you ready? – not to lose vs. playing to win.”

Conversely, Alabama, as it has so frequently during its breakthrough season, seized the moment and took the win with a game-closing 18-5 run at Coleman Coliseum in Tuscaloosa, Alabama.

Kentucky (5-10, 4-4 Southeastern Conference) grabbed a 54-52 lead on a Davion Mintz 3-pointer with 4:27 left, but the Wildcats would fail to score again until there were just 39.1 seconds remaining in the game.

At that point, Alabama (14-3, 9-0 SEC) had found some offensive success after being stifled for much of the night and had taken control of the game with a 10-0 run.

“We had our chances,” Calipari said. “We, again, got out-toughed. Just makes me sick.”

Behind Jaden Shackelford’s 21 points, the Crimson Tide went 2-0 in the regular season vs. Kentucky for the first time since 1989 and extended its winning streak to 10 games, its longest since the 1996-97 season. At the midway point of conference play, the Crimson Tide have a four-game lead in the win column.

”We came to the huddle and we just told each other that we know how to win these games and kind of rallied together and decided to get a steal coming out, and that’s what we did,” said Alabama guard Herb Jones , who flirted with a triple-double with 13 points, nine boards and eight assists. “We came out and got stops.”

Kentucky had a game plan to try to slow down one of the hottest teams in the country and Alabama provided the recipe for a possible upset.

Entering the game averaging 86.8 points and 13.3 3-point field goals per game in league play, including an SEC single-game record 23 3-pointers one week ago, Alabama struggled to make shots in this one against UK’s length and changing defenses.

After starting 5 of 5 from the floor and 3 of 3 from 3-point range to take a 13-5 lead, Alabama made just three 3-pointers the rest of the game and was held to 39.2% shooting overall. The Tide’s six 3-pointers marked its second-lowest total of the season, and it was the fifth time in the last six games Kentucky has held the opposition to less than 40% shooting.

In the second half alone, Kentucky held Alabama without a field goal for more than 10 minutes to start the half and six total makes after halftime. Three of those were in the decisive final 3:09 of game time. Alabama was aided by going to the line 26 times in the second half, making 22 of them.

“In a sense, I’m proud of how hard they fought,” Calipari said. “This (Alabama) team has beaten everybody pretty good and we did our thing that we were trying to do defensively.”

But as has happened too many times this year, the Wildcats spoiled a defensive gem. Kentucky made just 35.2% from the floor and failed to crack 60 points for the third time this season. The Wildcats committed 17 turnovers – four by way of offensive fouls in the second half – that led to 20 Alabama points, the fourth time in five games they have turned it over 17 times or more.

Passing up shots and a lack of passing the ball, Calipari said, are at the root of UK’s offensive woes, especially late in games where the Wildcats are minus-37 in the final four minutes of regulation this season.

“We’re just not ready to finish a game off,” Calipari said. “We’re inexperienced, we don’t have the physical toughness, the mental toughness to make shots. My belief is that we’re going to break through.”

But Calipari lamented UK’s inability to find someone who can beat someone one-on-one when the Wildcats need it the most.

Sarr said that’s an issue he and his teammates have to overcome together.

“You execute,” Sarr said. “We showed that we’re a great strength, us five players on the court, playing together, executing and sharing the ball. That’s our strength and we’ve got to play through that.”

But the Wildcats are running out of time halfway through the conference season to correct the issues.

Asked if it’s now SEC Tournament championship or bust to make the NCAA Tournament, Calipari said they’re not there yet because of the difficult schedule ahead and the opportunities those games present. UK is in the midst of a six-game stretch against opponents all ranked in the top 40 of the NET, including Saturday’s SEC/Big 12 Challenge matchup vs. No. 5/5 Texas.

“I know we’re getting closer, but you just want to win these games,” Calipari said. “… These are wins for us, and we’re letting go of the rope or not mentally tough enough to not turn it over, make the play you need to make, (to) be able to function with the stuff swirling. We’re not there yet.

“But you know what? I’m not stopping We’re going to try to figure it out.”