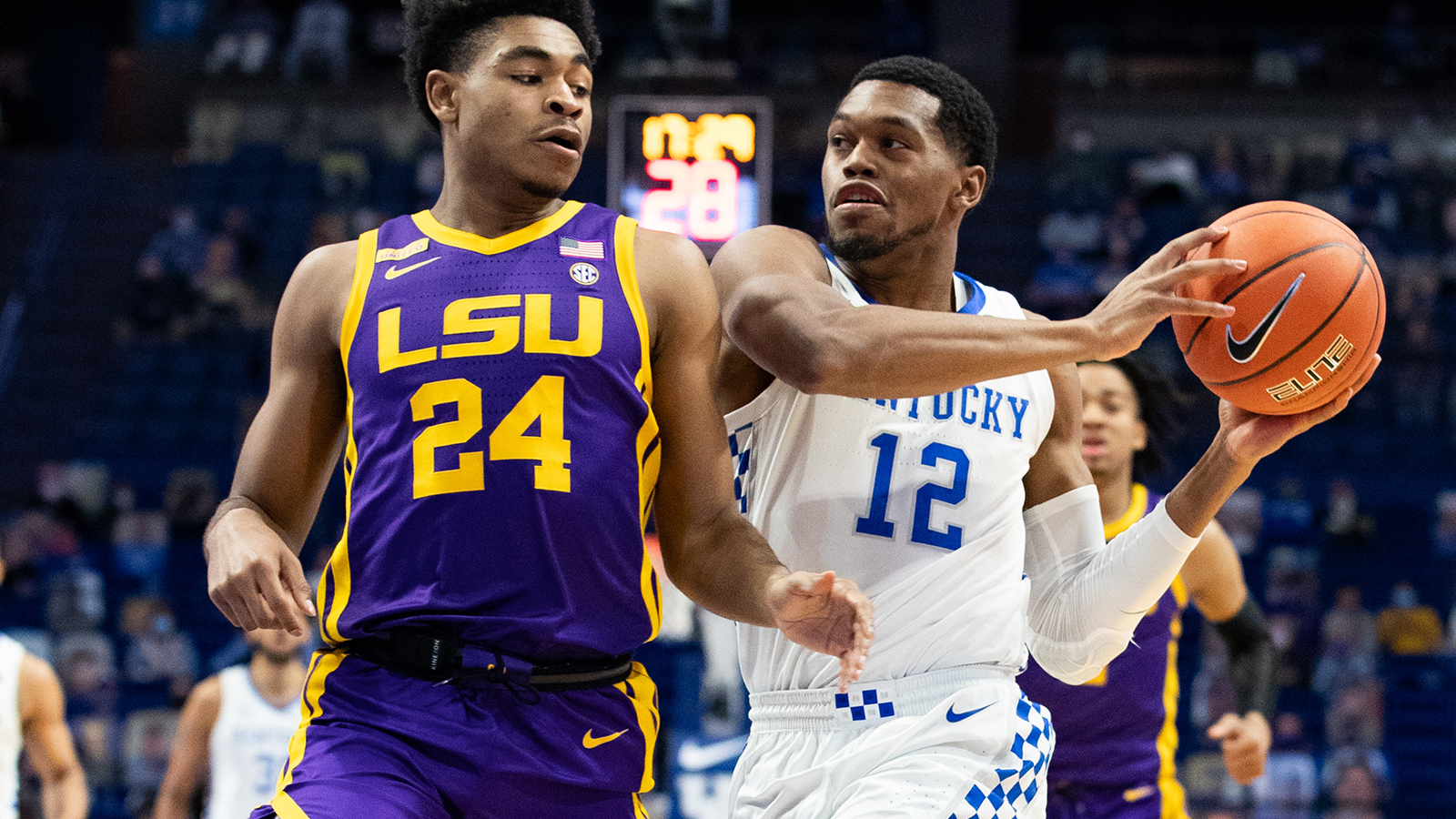 LEXINGTON, Ky. – There was a point late in the first half of Kentucky’s game vs. LSU when the bad habits that have plagued the Wildcats for much of the season tried to resurface.

Enjoying the best two-game stretch of his career, Brandon Boston Jr. was on a fast-break opportunity with Dontaie Allen and elected to try to score it himself by avoiding contact with Javonte Smart and flipping the ball up and under the defender.

He missed it, and John Calipari went, as he described it, “crazy.”

“You’re not going back to that guy,” Calipari said. “That guy has left the building. You’re going to be the guy that we keep training you to be. That’s who you are.”

Of late, Boston has looked more like the player that was billed in the preseason as one of the top freshmen in the country. He scored 18 points for a second straight game as Kentucky defeated LSU 82-69 on Saturday in Rupp Arena.

The victory snapped a three-game losing streak for the Wildcats (5-9, 4-3 Southeastern Conference) and avoided just the third losing skid of four or more consecutive games in the Calipari era.

It’s the second straight loss for the Tigers (10-4, 5-3 SEC), who still have a strong résumé for the NCAA Tournament.

Boston was 7 for 17 from the floor with two 3-pointers. His 36 points over the last two games mark the best stretch of his career, and he’s scored efficiently during that stretch with 47.1% shooting.

He has dribbled less, attacked more aggressively and – with Saturday’s first-half exception – flipped the ball less.

“I always envisioned myself to be the guy that helps the team,” Boston said. “Just do everything I can to help my team win obviously when it comes to scoring rebounding, assists and playing defense.”

“All of a sudden you look like one of the best players in the country,” Calipari said. “The flipsy-doodles that get nothing except a layup down the other end? We’re not having that anymore.”

To his credit, Boston responded to one of his few bad habits with an equally strong second half. As Kentucky’s offense slowed down after the best offensive half of the season, Boston’s personal 8-0 run midway through the second half, including a key “and one” where he finished through contact, put the margin back to double digits after LSU had cut UK’s lead to five points.

“I just listened to (Calipari), and when I came back out, I got the and one and it was just up from there,” Boston said of, perhaps, a key turning point in his development.

Could it also be a sign the collective group is turning a corner? And is it too late for UK’s at-large postseason hopes?

Whatever the case may be, Kentucky’s offense was as its best of the 2020-21 season on Saturday.

With LSU pressing in the full court and half court for much of the game, the Wildcats took advantage of the spacing. UK took a season-high 26 3-point attempts and continually beat LSU on the break with lob dunks.

“Today we had nine turnovers and probably four of them or three of them were shot-clock violations,” Calipari said. “I’m still all over guys to shoot balls. Guys won’t shoot ’em. They have a shot, they pass up a shot and they dribble into a harder shot.”

Keion Brooks Jr. enjoyed his best offensive game as a Wildcat, tying career highs in points (15) and rebounds (nine). He scored 13 of his points before halftime.

As Brooks slowed in the second half, Boston continued to roll and Kentucky bigs Olivier Sarr and Isaiah Jackson stepped up. Jackson scored six points and grabbed 13 rebounds after halftime and Sarr scored seven second-half points in less than five minutes.

Kentucky also held LSU to 38.5% shooting, the third game in a row and the fourth in the last five the Wildcats have limited the opposition to less than 40% from the floor.

Calipari was happy with the toughness, but in his opinion this one came down to taking care of the ball. After three straight games with 17 or more turnovers, the nine on Saturday helped the offense break out of its slump.

“Everybody was playing for each other instead of themselves,” Calipari said. “When you’re out there trying to make hero’s plays, you’re turning it over. … You’re playing for you instead of us. There are going to be turnovers.”

Now Kentucky heads to Alabama, one of the hottest teams in the country. At 8-0 in conference play, the Crimson Tide have three more league wins than anyone else.

One of those was an 85-65 blowout of the Wildcats two weeks ago in Rupp Arena. It was Kentucky’s largest home defeat since a 23-point loss to Indiana in Rupp Arena on Dec. 20, 1988.

It’s the second of six straight games for UK vs. opponents ranked in the top 40 of the NCAA Evaluation Tool rankings.

“These are the games you want to play to where you know you’re not supposed to win the game,” Calipari said. “Now you go and it gets you going, you play. Instead of playing not to lose, you play to win.”