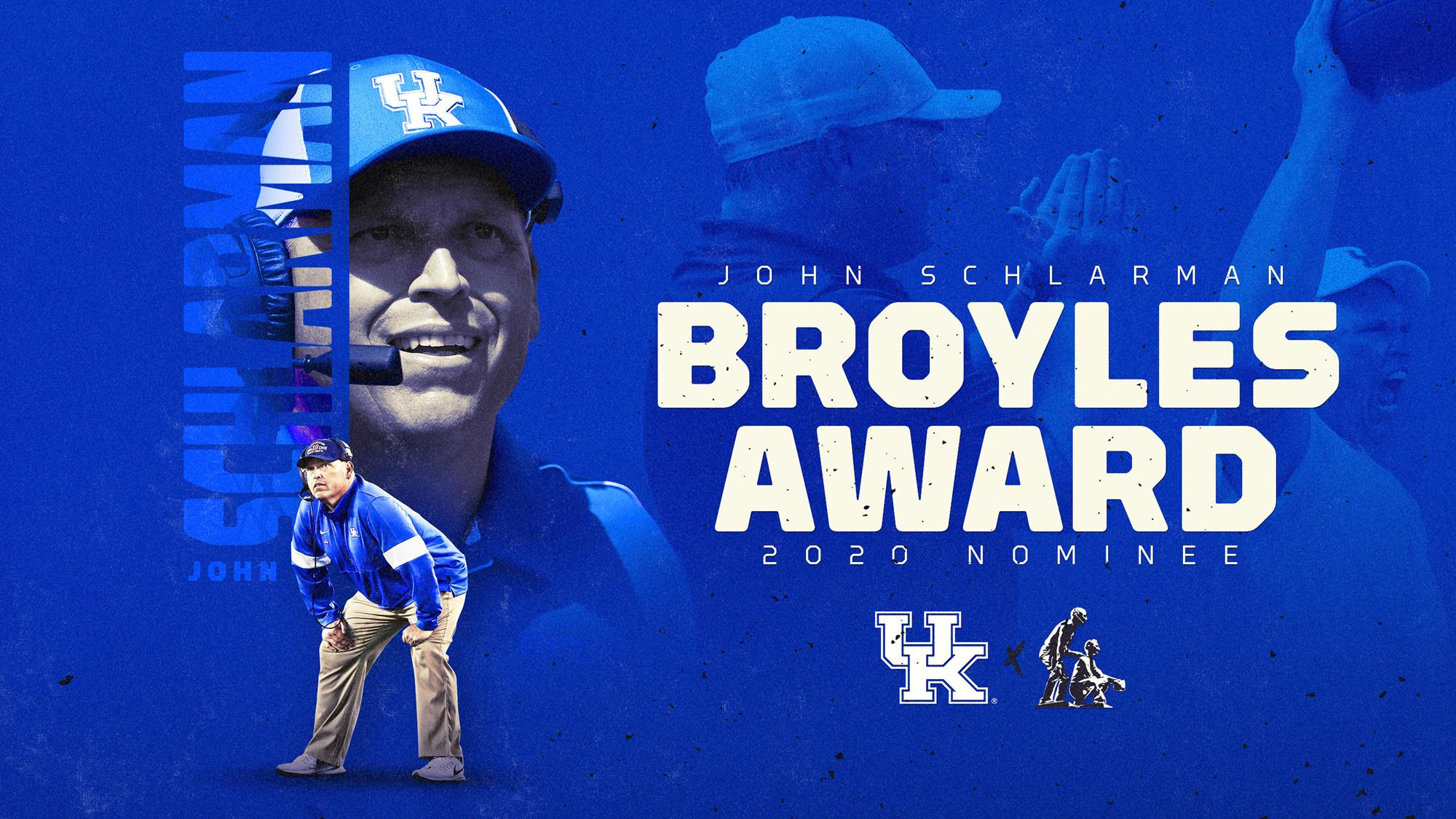 Former University of Kentucky offensive line coach John Schlarman is among the 56 nominees for 2020 Broyles Award, it was announced today by the Frank & Barbara Broyles Foundation.

The nominees in this year’s class were selected from approximately 1,270 assistant coaches representing 127 Division One programs across the country. The Broyles Award selection process includes the Football Writers Association of America (FWAA), broadcasters, a College Football Hall of Fame selection committee and current college head coaches.

Schlarman was an original member of head coach Mark Stoops’ staff in 2013, working tirelessly to help rebuild a football program that he loved dearly.  A perfect fit for Stoops’ blue-collar approach, Schlarman’s offensive line, affectionately known as the “Big Blue Wall,” played a key role in the process that culminated with four consecutive bowl appearances from 2016-19. In 2018, UK went 10-3, the school’s first 10-win season in 41 years, topped by a win over Penn State in the VRBO Citrus Bowl.  UK followed with a win over Virginia Tech in the 2019 Belk Bowl.

In the summer of 2018, Schlarman was diagnosed with cholangiocarcinoma. Despite the diagnosis, he continued to coach through countless treatments, and horrific side effects of those treatments. He did not miss a game (and rarely missed a practice) until Oct. 24, 2020 at Missouri. His final appearance on the sidelines was Oct. 17 at Tennessee in UK’s first in Knoxville since 1984. Schlarman passed away just three weeks later, on Nov. 12, 2020.

A 43-member selection committee of distinguished former head coaches, broadcasters, and a committee representing the FWAA will select 15 semi-finalists and five finalists from the list of nominees and an overall winner.

The winner of the 2019 Broyles Award was Joe Brady, passing game coordinator at LSU. Previous winners are not eligible to be nominated for the Broyles Award until the completion of three seasons.

Proceeds from the 2020 Broyles Award support the mission of the Broyles Foundation; to provide a game plan through education, support, and resources to Alzheimer’s caregivers. The Broyles Foundation can be followed on Facebook, Twitter and Instagram.