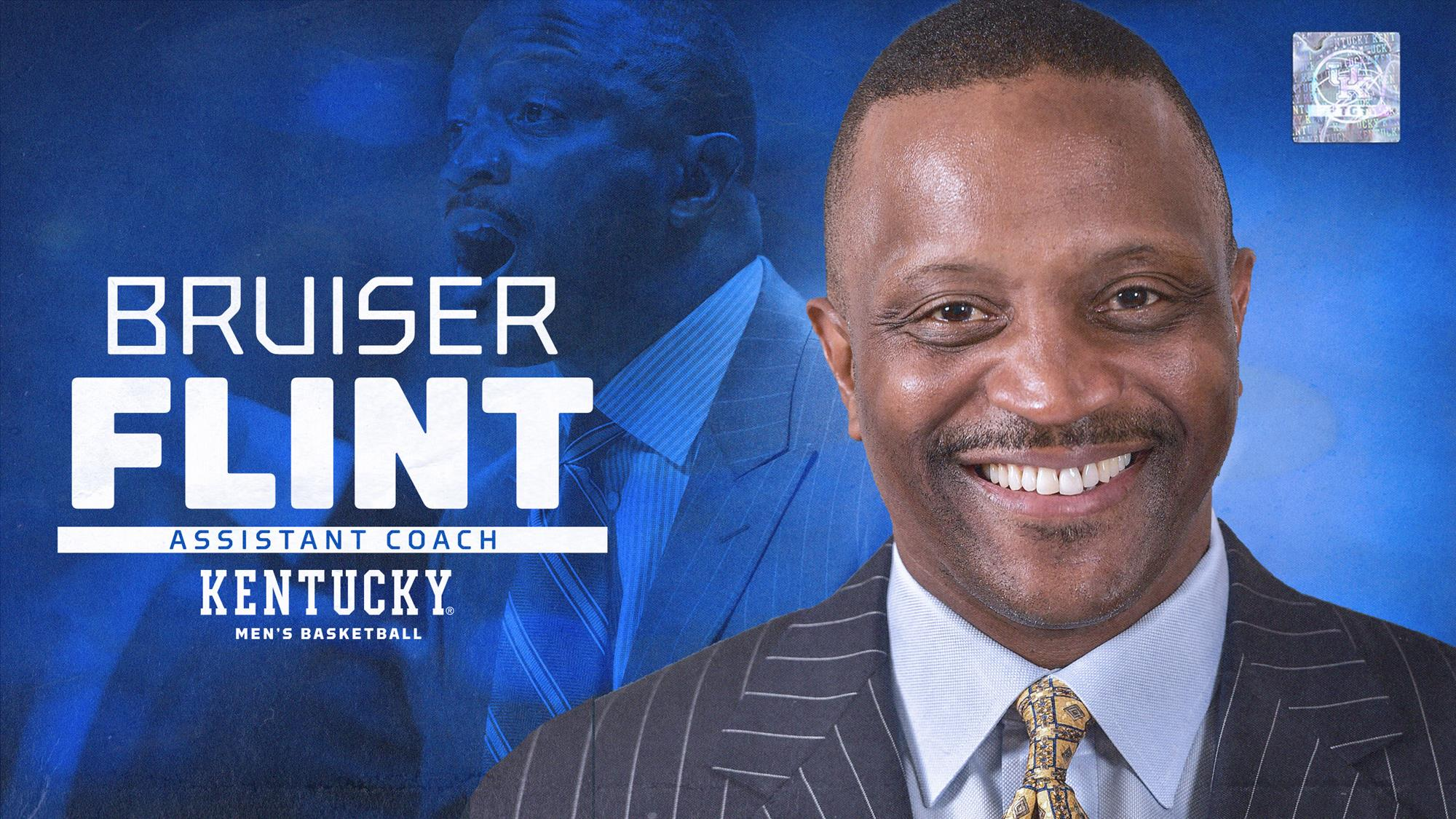 LEXINGTON, Ky. – The Kentucky men’s basketball program has added James “Bruiser” Flint – a former John Calipari assistant with more than 30 years of coaching experience – to the staff as an assistant coach.

Flint will fill an opening created earlier this month when associate head coach Kenny Payne accepted an offer to join the New York Knicks as an assistant coach.

“Bruiser and I go back to our days at UMass,” UK head coach John Calipari said. “Bru is not only a terrific coach, he’s like my brother. You’re not going to find anyone that says a bad word about him. He forms great relationships with players because he listens, has a terrific personality and can relate to anyone. Bruiser has an incredible basketball mind and is going to help us in a lot of ways. He was a terrific player, too.

“Bruiser is one of those guys who has always done more than people thought possible, both as a player and a coach. I can’t wait to get started and get back at it with Bru as a part of our team.”

With a blue-collar background and an infectious personality, Flint is well known in the college basketball fraternity for his success in both recruiting and developing players. His honest, engaging approach has been the consistent variable behind 20 successful seasons as a Division I head coach at Drexel (2001-02 to 2015-16) and UMass (1996-97 to 2000-01), plus several prominent assistant coaching stops, including seven seasons at UMass under Calipari. 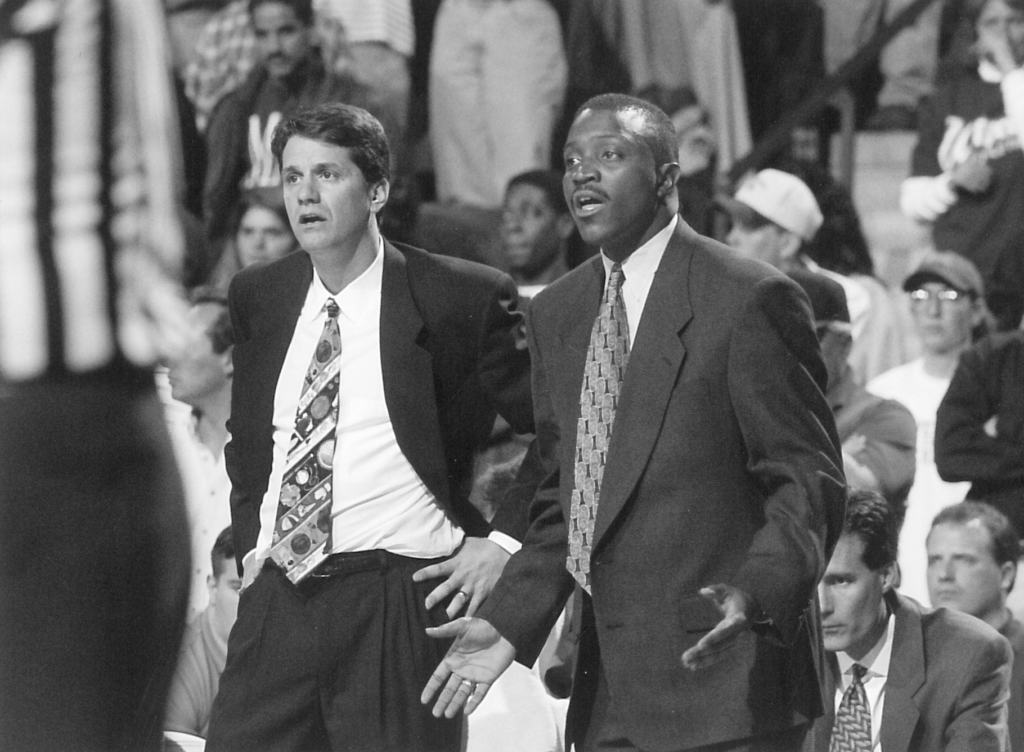 Flint, who will begin immediately, served the last three seasons at Indiana under Archie Miller.

“First of all, I want to thank Indiana and Coach Archie Miller for letting me be a part of your family for the last three years,” Flint said. “Hoosier Nation treated my family and I with incredible kindness. Bloomington is a special place and I am forever grateful to everyone at IU.

“I am so excited to get started in Lexington. Kentucky, as Coach Cal likes to say, is the gold standard in college basketball. Going back to our time at UMass, Coach Cal has been both a brother and a mentor to me for 30 years. I have always had great respect for his approach and his care for his players. He and I both believe that when you put players first — when you make their dreams your dreams — we can accomplish special things.

“I’m looking forward to getting in the gym with some special young men and representing Big Blue Nation.”

Flint was a member of Calipari’s staff at UMass from 1989 through the 1995-96 season, helping build a national program in Amherst, Massachusetts, after 11 straight losing seasons. With Calipari and Flint on staff, the Minutemen made five NCAA Tournament appearances, including the 1996 Final Four run, to go along with five Atlantic 10 regular-season and five A-10 Tournament titles.

Flint played a key role in the development of Marcus Camby, who won the John R. Wooden Award and the Naismith Trophy as the national player of the year in 1996. Camby was drafted No. 2 overall in the NBA Draft that spring.

After Calipari departed for the NBA, Flint took over UMass for five seasons, including NCAA Tournament berths in the first two seasons. He posted the best record of any first-year UMass coach.

Following his stint in Amherst, Flint took the reins at Drexel, where he racked up more victories (245) than any other coach in school history over his 15 seasons. With stingy defenses and a culture of toughness, Flint set new standards at Drexel, leading the Dragons to 20 or more wins three times while recording at least 10 Colonial Athletic Association wins in nine seasons.

During his tenure, Drexel featured the CAA Defensive Player of the Year on four occasions, 23 All-CAA selections, 12 members of the conference’s All-Defensive Team, six players named to the league’s All-Rookie Team and two CAA Rookies of the Year.

Flint’s Dragons had a record-breaking season in 2011-12. His squad set a school record with 29 wins and won the CAA regular-season title, going 16-2. The Dragons won a program-best 19 straight games and advanced to the CAA title game for the second time ever.

In his latest stop, at Indiana as an assistant, Flint was part of a staff that produced the No. 11 recruiting class nationally in 2018 and 2020 (according to ESPN’s rankings), including Indiana Mr. Basketball winners Romeo Langford (2018) and Trayce Jackson-Davis (2019). Langford and Jackson-Davis were named McDonald’s All-Americans and Langford was a lottery pick by the Boston Celtics.

Last season, Indiana finished 20-12 and was poised to return to the NCAA Tournament before the COVID-19 Pandemic hit. The Hoosiers also finished with a winning record against nationally ranked teams with five victories, tied for seventh most in the country.

He began his coaching career as an assistant coach at Coppin State (1988-89). A 1987 Saint Joseph’s graduate, Flint was a four-year letterwinner with the Hawks. He earned All-Atlantic 10 honors as a senior and led the Hawks to the 1986 A-10 championship and a berth in the NCAA Tournament as a junior. He was inducted into the Saint Joseph’s Athletic Hall of Fame in 1998.

Flint has a daughter, Jada.