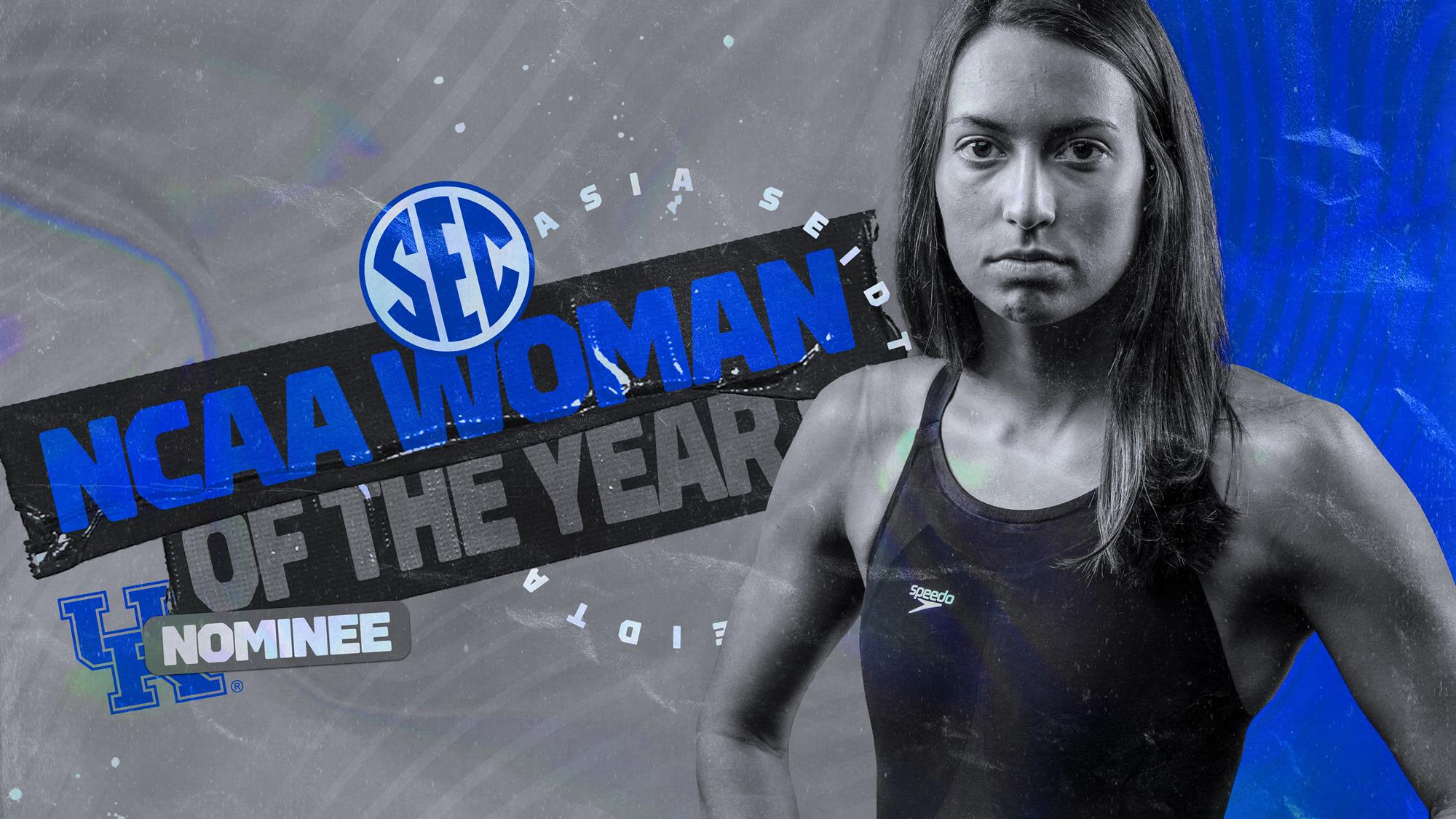 INDIANAPOLIS – Her swimming career is over, but her recognition keeps on coming. Asia Seidt, the most decorated student-athlete to ever come out of the University of Kentucky swimming and diving program, has been selected as the league’s nominee for the 2020 NCAA Woman of the Year honor.

Of all swimmers and divers – male or female – who have ever come through the Kentucky swimming and diving program, Seidt holds the most records. She has earned more All-America honors, NCAA Championship podium finishes, SEC Championship medals and All-SEC First Team selections than any UK swimmer or diver, man or woman, that has come before her.

“It is difficult to put into words how meaningful this award is to me and my swimming career,” Seidt said. “Since I wasn’t able to finish my championship season, this helps bring a sense of accomplishment, really on behalf of the University of Kentucky and my team. Even though many sports were cut short, it means a lot that the NCAA is continuing with this award and is recognizing the incredible student-athletes in the class of 2020. I am honored to be in the field with the best of the best, and I look forward to the next step in the process.”

Seidt hails from the storied Lakeside Swim Club in Louisville. Over the years, the club has produced 10 U.S. Olympians. The club’s swimming team has also been ranked among the top 20 teams in the country every year since 2002. In 2016, Lakeside Swim Club was inducted into the Kentucky Athletic Hall of Fame, joining iconic entities Churchill Downs, Valhalla Golf Club, Keeneland Race Course, and Hillerich & Bradsby.

From a program-record pool of 605 school nominees announced in July, 161 college athletes have been named conference-level nominees for the 2020 NCAA Woman of the Year honor. The nominees represent student-athletes from 21 different sports spanning all three NCAA divisions. Of those nominated, 59 nominees competed in Division I, 39 in Division II and 63 in Division III.

Conferences can recognize two nominees if at least one is a woman of color or international student-athlete. All nominees who compete in a sport not sponsored by their school’s primary conference, as well as associate conference nominees and independent nominees, were placed in a separate pool to be considered by a selection committee. Four nominees from the pool were selected to move forward in the process with the conference nominees.

The Woman of the Year Selection Committee, made up of representatives from the NCAA membership, will now choose the top 30 honorees — 10 from each division — from the conference-level nominees. The Top 30 honorees will be announced in September. From there, the selection committee will narrow the pool to three finalists from each division. The NCAA Committee on Women’s Athletics will select the 2020 Woman of the Year from the nine finalists.

The NCAA Woman of the Year program is rooted in Title IX and has recognized graduating female college athletes for excellence in academics, athletics, community service and leadership since its inception in 1991.