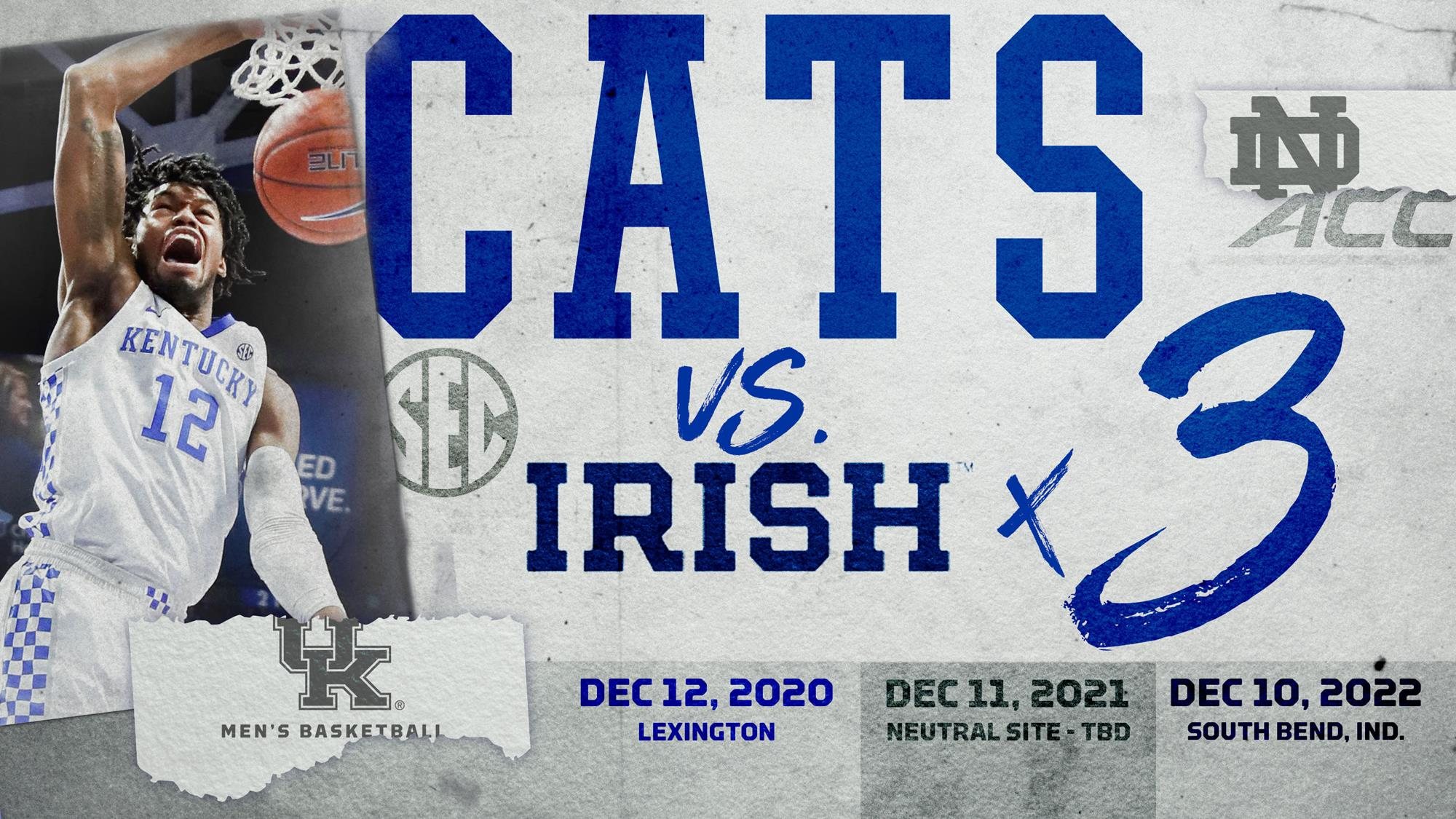 LEXINGTON, Ky. – A once annual college basketball rivalry is returning to the Kentucky men’s basketball schedule. UK has agreed to a three-year series with Notre Dame beginning with a home game in Rupp Area on Dec. 12 for the 2020-21 season. The series will also include a neutral-site event in 2021 and a road game in South Bend, Indiana, in 2022.

The teams will meet for a neutral-site game on Dec. 11, 2021 at a site yet to be determined. UK will travel to South Bend, Indiana, on Dec. 10, 2022. Game times and television designations for all three games will be announced at a later date.

“If our previous games are any indication, this is going to be a great series,” UK head coach John Calipari said. “I can remember playing Notre Dame in 2010 in Freedom Hall and Ben Hansbrough going crazy in the first half and Terrence Jones willing us to victory in the second half. We went to South Bend a couple years later and that place was nuts. The football team was there and they thumped us. And then the game in 2015 in the Elite Eight was one of the best all-around games I’ve been a part of. Elite play from both teams.

“I’ve got a feeling these three games are going to provide some similar battles. Mike Brey is a terrific coach who always builds teams that are going to fight and give you everything they’ve got. I really like how our nonconference schedule is coming together for the next few seasons.”

The revival of this historic series was initiated by JMI Sports, who will be the promoter of the neutral site game in 2021. JMI Sports is the exclusive multi-media rights holder at Kentucky and shares comparable rights with Legends at Notre Dame.

The Wildcats and Irish have played in an on-again, off-again series for more than 80 years. UK leads the series by a 43-19 margin and won the last matchup between the two schools in an epic showdown in the NCAA Tournament for the right to move on to the Final Four in 2015. UK prevailed 68-66 thanks to late defensive heroics by Willie Cauley-Stein and clutch plays down the stretch by Aaron and Andrew Harrison.

Kentucky and Notre Dame have only met eight times in Lexington, Kentucky, with the Cats coming out on top in every meeting. UK leads the series 10-6 in South Bend, Indiana, but the Irish have won two straight in the series at home, including a 64-50 win in 2013.

The Wildcats currently have dates now set with nine opponents for the 2020-21 season.

Other nonconference matchups for this upcoming season will include the annual rivalry game vs. Louisville and the annual SEC/Big 12 Challenge. A date has not been finalized for the former and an opponent has not been determined for the latter.

The nonconference schedule will give way to the typically difficult Southeastern Conference slate. The league schedule has not been announced yet, but UK will play its permanent home-and-away opponents of Florida, Tennessee and Vanderbilt twice, plus host and visit two additional league opponents. The Wildcats will face the remaining eight SEC opponents once.

The league has earned 15 berths in the last two NCAA Tournaments, the conference’s best two-year stretch. The SEC was slated for another impressive haul last season until the COVID-19 pandemic canceled the postseason.

Calipari and his staff have prepared for the losses – which includes five underclassmen declaring for the NBA Draft – with the nation’s consensus No. 1 recruiting class and three key transfers.

JMI Sports is a full-service collegiate media and marketing firm providing the highest quality management of athletics multimedia rights. Breaking new ground in the creation of the Total Campus Marketing program, JMI Sports works hand-in-hand with each university in the pursuit of their success and maximizing their economic potential. JMI Sports owns the rights to an impressive list of signature partnerships including the University of Kentucky, Clemson University, the University of Pennsylvania, the University of Pittsburgh, the Ivy League, Patriot League, Mountain West Conference, the Mid-American Conference, and joint-venture properties of the University of Georgia and Columbia University (with IMG College), as well as the University of Notre Dame (with Legends).