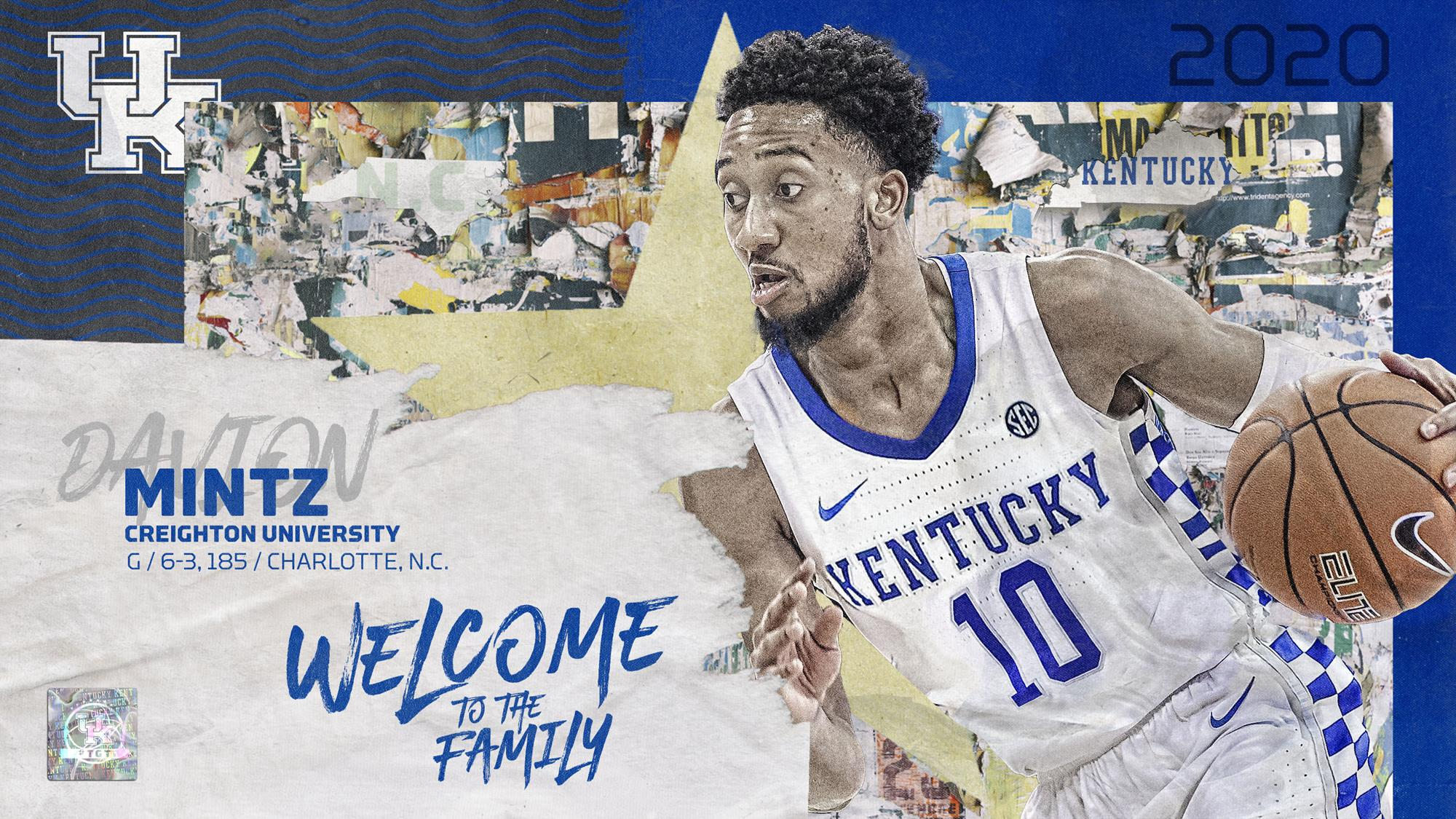 LEXINGTON, Ky. – The Kentucky men’s basketball team bolstered its backcourt Wednesday with the addition of Davion Mintz, a graduate transfer from Creighton.

Mintz, a 6-foot-3 guard who played in 97 games with 79 starts for the Bluejays, officially signed with UK at the beginning of the spring signing period on Wednesday after verbally committing last week. Mintz is expected to add valuable experience, leadership and depth to what’s projected to be a young but talented squad in 2020-21.

Under NCAA graduate transfer rules, Mintz will be eligible to play for the Wildcats in the fall after graduating from Creighton with undergraduate degree in marketing. He is expected to graduate in May.

“BBN, I am thrilled, humble and hungry to be part of the UK family,” Mintz said. “I look forward to earning your trust and respect through my commitment, experience and hard work every day. I am immensely thankful to the Kentucky Wildcats, Coach Calipari and his staff for extending me an opportunity to continue my college basketball career as a Wildcat.

“To my new teammates and fans, you can believe and trust in me. I look forward to meeting all of you. I can’t wait to arrive to Big Lex and get to work.”

Mintz will be Kentucky’s third graduate transfer over the last three seasons. UK added Reid Travis from Stanford for the 2018-19 season and Nate Sestina from Bucknell for 2019-20. Travis helped anchor a frontcourt that went to the 2019 Elite Eight and Sestina provided valuable depth and timely shooting for the 2020 Southeastern Conference champions.

The Wildcats are hoping UK’s first graduate guard transfer since Julius Mays in 2012-13 will have a similar impact.

“I’m really excited about Davion and what he adds to our team,” UK head coach John Calipari said. “You’re talking about a veteran who has been through the wars and has been well-coached from high school through his time at Creighton. Davion wanted this opportunity and challenge. He’s in the mold of so many of our other guys in that he’s a terrific kid from a terrific family.”

Mintz redshirted in 2019-20 after battling an ankle injury in the preseason and then re-aggravating it in practice upon his return, but he started all but one game in the previous two seasons.

A native of Charlotte, North Carolina, Mintz started all 35 games for Creighton in 2018-19, averaging 9.7 points, 3.0 assists and 3.0 rebounds in 28.8 minutes per game. Mintz was regarded as the Bluejays’ best defender and ranked second on the team with 40 steals.

Mintz can play both on and off the ball. He totaled more than 100 assists in each of his last two active seasons – 259 total in his three-year career – and is an adept shooter. He made 43 3-pointers in his last season on the floor and is a career 35.0% 3-point shooter.

The 6-3 guard scored in double figures in 16 games his junior season with a career high of 21 points vs. No. 21 Marquette. He also played all 45 minutes vs. No. 14 Villanova and totaled 19 points, eight rebounds and four assists. He was expected to be a key part of the 2019-20 Creighton squad that went 24-7 and won a share of the Big East title.

As a sophomore, Mintz led the Big East and ranked 15th nationally with a 2.83 assist-to-turnover ratio. In 10 games vs. ranked opponents in 2017-18, he totaled 38 assists with just 10 turnovers.

Although not officially a part of the 2020 signing class, Mintz will join a group of newcomers that is widely regarded as the top class in the country. UK’s current seven-man class features six consensus five- and four-star prospects, including top-10 signees Brandon Boston and Terrence Clarke.

Forward Keion Brooks Jr. has already announced he will return for his sophomore season, but Kentucky will have to replace seven of its top eight players from a season ago with five underclassmen declaring for the NBA Draft in recent weeks, Sestina’s eligibility expiration and the transfer of Johnny Juzang.

The 2020-21 Wildcats will be tasked with replacing 94% of their scoring and 84.4% of their rebounding from this past season.