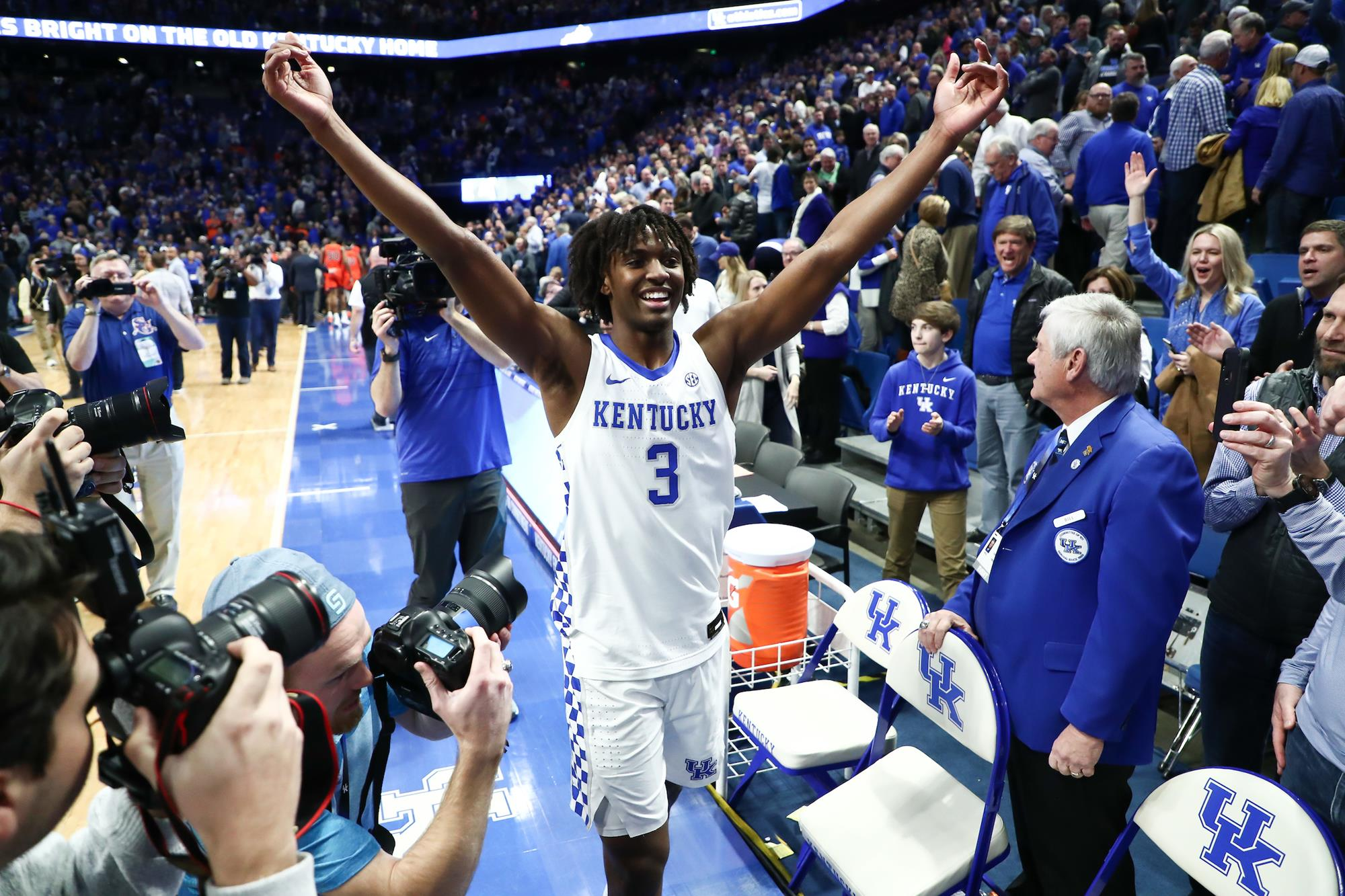 LEXINGTON, Ky. – Kentucky men’s basketball guard Tyrese Maxey will pursue a career in the NBA. The freshman declared for the NBA Draft on Monday and announced he plans to forgo his remaining collegiate eligibility.

Maxey was one of the top freshmen in the country in 2019-20 and averaged 14.0 points per game for the Southeastern Conference champions.

“This year getting to rep Kentucky across my chest was everything I could have imagined,” Maxey said. “I got to play for a Hall of Famer, be pushed every day by the best coaches in the country, compete alongside great teammates and work with a support staff that is the gold standard – just like Coach Cal promised. 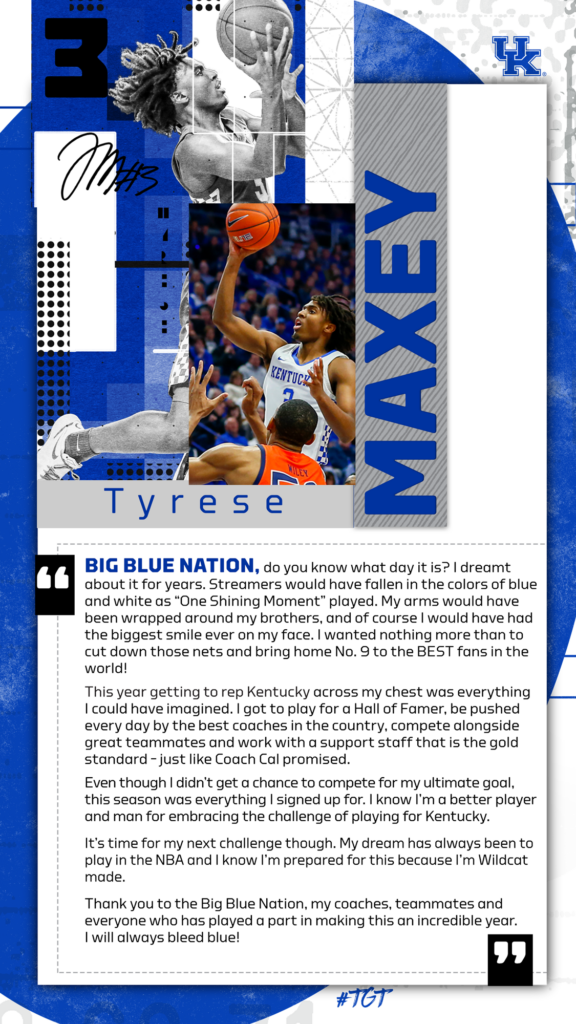 “Even though I didn’t get a chance to compete for my ultimate goal, this season was everything I signed up for. I know I’m a better player and man for embracing the challenge of playing for Kentucky.

“It’s time for my next challenge though. My dream has always been to play in the NBA and I know I’m prepared for this because I’m Wildcat made.

“Thank you to the Big Blue Nation, my coaches, teammates and everyone who has played a part in making this an incredible year. I will always bleed blue.”

“There was no player I was harder on this year than Tyrese, and there’s a reason for that,” UK head coach John Calipari said. “One, he’s a great kid with a confidence in his ability that does not waver. Two, he has a potential that he has only begun to realize. And three, Tyrese needed to be challenged to take that next step.

“Tyrese made that leap this season. He met every challenge and became one of the best guards in the country. Not only was it his dream to play at Kentucky, he wanted to be coached. He’s going to do great in that league because there’s nothing he can’t do. He can handle the ball, he can shoot, he’s got great athleticism and he really defended as the season went on. In a lot of ways, he reminds me of what Jamal Murray was able to do and we know how well he’s done in the NBA.

“I’m so happy for Tyrese and his family.”

Maxey is the second Wildcat in as many days to declare for the NBA Draft. Sophomore guard Ashton Hagans announced Sunday he plans on pursuing a professional career.

Of the 27 players at UK who have declared for the NBA Draft after their freshman seasons, 25 have been first-round picks. All 27 have played a game in the NBA. Calipari is 29 for 31 in that regard when including his players from Memphis.

Maxey was stellar for the Wildcats all season long, but he came up particularly big in UK’s biggest games.

Highlighted by a career-high 27-point performance in the victory over No. 3/4 Louisville, Maxey averaged a team-high 19.0 points to go along with 5.3 rebounds in UK’s six games vs. Associated Press Top 25 foes. In true road games, Maxey ranked second on the team with an average of 14.4 points. He also added 4.4 rebounds, 3.3 assists and 1.0 blocks per game in hostile territory.

Maxey’s 26 points in the 1-2 matchup vs. Michigan State topped Terrence Jones’ 25 points against East Tennessee State in 2010 for the most points by a freshman in his debut as a Wildcat. In that game, Maxey’s first points didn’t come until just after the midway point of the first half, but he scored seven straight points to help Kentucky earn an 11-point halftime lead. From the 10:03 mark of the second half until a pair of Ashton Hagans’ free throws with 37 seconds to play, Maxey scored or assisted on 14 straight UK points to hold off the Michigan State rally, including the game-clinching shot with just over a minute to play from well behind the 3-point line.

Against Louisville, he made a career-high nine field goals (on 14 shots), sunk a career-best four 3-pointers and tied a career high with seven rebounds. His 27 points were the most by a UK freshman vs. Louisville and the most by a Wildcat in the rivalry since Jodie Meeks score 28 on Jan. 4, 2009.

Highlighted by six 20-point performances, Maxey scored in double figures in 22 games. The league’s coaches picked him for the All-SEC Second Team and the SEC All-Freshman Team. He was also a three-time SEC Freshman of the Week selection and both the NCAA March Madness National Player of the Week and the U.S. Basketball Writers Association Wayman Tisdale National Freshman following the win over Louisville.

The Texas native played particularly well down the stretch. He averaged 15.5 points per game on 42.9% shooting over the final 12 games, scoring in double figures in 10 of those. Included in that stretch, Maxey had 10 second-half points to lead a double-digit comeback effort at home against Vanderbilt, led the charge in another double-digit deficit against the Commodores on the road on Feb. 11 with 25 points, and posted 17 points vs. 15th-ranked Auburn to help the Wildcats to the SEC regular-season title.